May 4, 2020, © Leeham News: The global airline industry is on the cusp of a fundamental restructuring that will be painful, and painfully long.

Several others are on the brink of filing for bankruptcy—among them Lufthansa and Virgin Atlantic, brand names that aren’t normally at the top of an endangered list.

A shake-out in Europe was already underway before the COVID-19 crisis erupted. The inevitable shake-out in Asia hadn’t yet begun.

Fleet rationalization among legacy carriers will occur at rapid-fire speed. And some carriers now have the opportunity to shed unprofitable routes that were maintained for market share.

It’s going to be an ugly process, though.

There are now more than 16,000 commercial passenger jets classified as stored. This includes nearly 11,000 single-aisle and more than 3,000 twin-aisle aircraft of all descriptions. More than 12,000 of these were parked since March 1, when COVID became a worldwide catastrophe. (About 2,000 aircraft returned to service since then, 35% to China.) 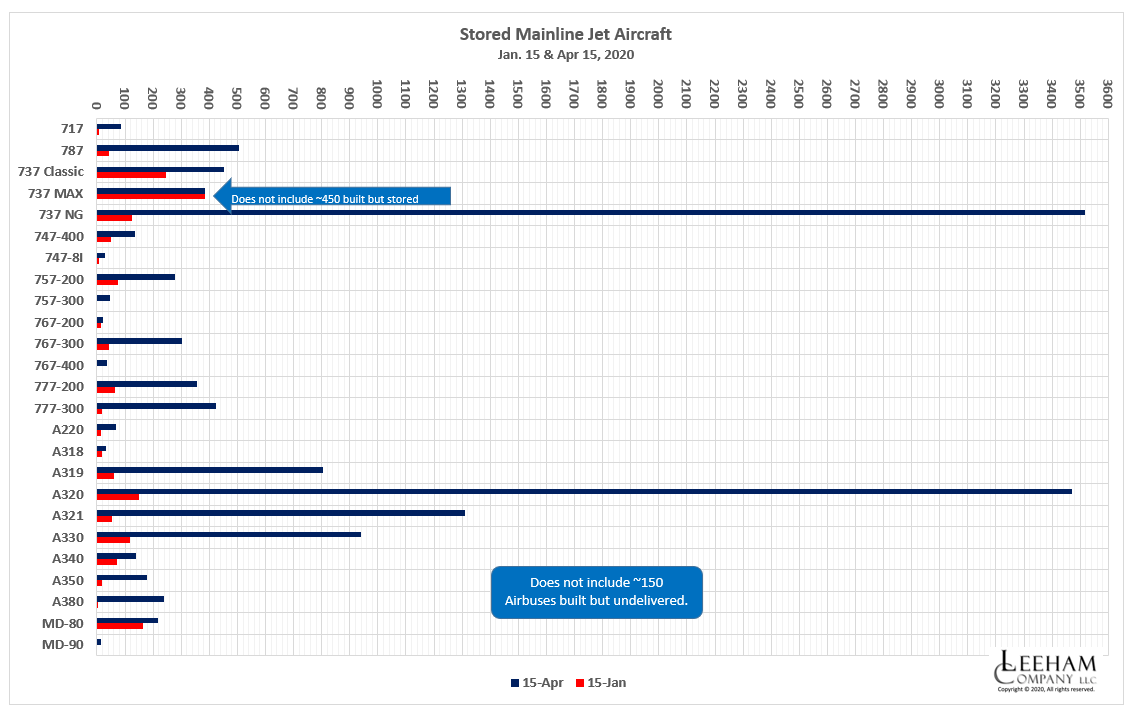 These figures exclude the nearly 450 737 MAXes and nearly 150 Airbuses that were built but remain undelivered.

With these retirements goes marginal routes across the globe.

No bonanza for Airbus and Boeing

These accelerated retirements won’t mean a bonanza of new orders for Airbus and Boeing. The down-sized route systems see to this.

But it could mean the fear of canceled and deferred orders may be mitigated. As airlines rebuild, they’ll take deliveries of airplanes on order.

And, in a counter-intuitive scenario, now that credit markets are reopening to the industry, taking delivery of new orders could be cash-positive for airlines

Many carriers will finance their planes instead of paying cash for them. Depending on a lot of factors, few of which can be identified with certainty today, financing might be over invoice price, resulting in a net cash gain.

Airlines (and lessors) typically pay 30% of the airplane’s cost before delivery. This is sunk money. Whether financing, or sale/leasbacks, are done over invoice cost, the transactions still means cash for the customer.

In a podcast Friday organized by Aviation Week, Embraer Commercial Aviation CEO John Slattery suggested regional jets will be among the first to return to service. Demand initially will be thin, supporting smaller rather than larger aircraft, he said.

In a follow-up with LNA, Slattery amplified his comment.

“Seventy-six…enhance the product offering flown by the major airlines to insure stability for the major airlines and their work force (by having the right capacity that complements and contributes to the larger mainline aircraft in the systems),” he wrote LNA in an email.

American, Delta and United airlines are limited in the number of RJs that can be flown in proportion to mainline jets. Slattery isn’t suggesting there will be disproportionately more smaller jets as airlines resume service.

“Our view is that during this crisis, the airlines will not seek to add more regional aircraft units allowed under Scope (as happened post 9-11), but to work towards better optimization of the types of airplanes, currently available, that are flown by regional partners. Given the depth of this crisis, nothing can be off the table for majors to insure their immediate survival as well as creating a sustainable structure post CV-19. It is important that the airlines create greater flexibility in their toolkit and diversification of risk, to allow them to be position to react to events such as this pandemic. Quickly being able to have the right aircraft (capacity and customer experience) at the gate has never been more important.”

US carriers already were moving away from 50-seat RJs, as Figure 2 shows. Slattery believes another look is warranted.

“It makes sense to look at the older 50 seaters (and the fact that many of them are slated to exit as part of the fleet drawdowns announced) along with the need for a baseline regional aircraft that plays a crucial role in maintaining service to [smaller] markets. By allowing some small adjustments on weight to allow an E175-E1 sized aircraft (even if slightly less the 76 seats) to fill current 50 seater scope slots, airlines can maintain the correct capacity flex to meet the market demands. This doesn’t change the ratio of regional to mainline pilots.

“Absent any adjustments on utilizing existing aircraft slots, there are still ways for the airlines to use existing aircraft in fleet in different ways [C550] that will allow for new, in production, aircraft to be introduced in their place and solidify their product and market position.”

Embraer last year floated a concept of turning used E-170s into a 50-seast configuration. It gained no traction at the time.

While COVID should cull the weak carriers across the globe, the plethora of retired aircraft, most with long useful life left, and cheap oil may actually spur entrepreneurs to create new low cost and ultra-low cost airlines to compete with the legacy carriers that downsize.

In the US, David Neeleman planned Breeze Airlines, initially using used Embraer E190s and new Airbus A220-300s to serve small- and medium-sized cities across the country. Andrew Levy, formerly of Allegiant and United airlines, planned a new LCC/ULCC to be based in Houston (TX).

With American, Delta, United and even Southwest airlines planning smaller operations, will Breeze and Levy’s carriers have greater opportunities? Will similar concepts start-up in the US, Europe and even Asia? Used airplanes will be cheap and plentiful. And there will be plenty of out-of-work pilots, flight attendants, mechanics and others looking for jobs.

It’s something to think about.