January 28, 2022, ©. Leeham News: Having discussed where investments would be the most efficient in alleviating our Greenhouse gas problems and identified the low-hanging fruit, we now look at new technology airplanes that can improve the situation.

We start with classical airliners, working our way from small types to the largest, then we discuss the impact of new transport forms like VTOLs for short-haul transportation.

As we will use the Leeham Aircraft Performance Model in some of the work, there will be extra articles (for this one, a Part 4P) which are Paywall, where we use the model to generate deeper data and understanding. 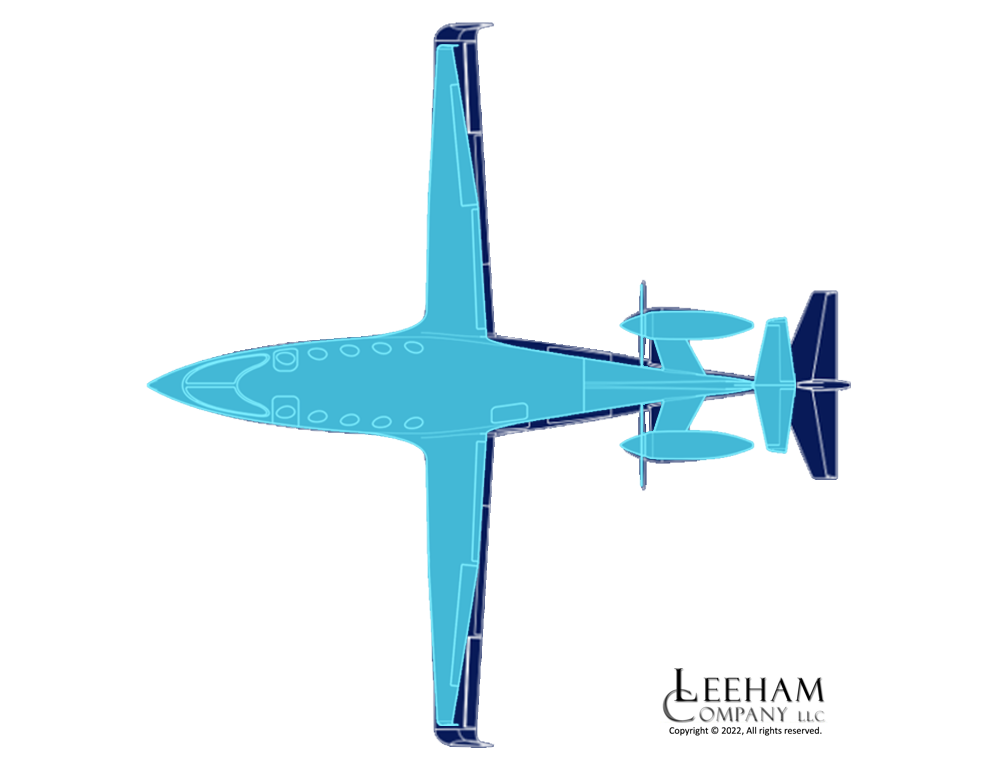 The most basic reality checks

A lot is going on in the world of Sustainable Aviation, with an abundance of upstarts offering one project after the other. New ways of doing aircraft using new Greener technologies are proposed, like battery or hybrid-electric designs competing with hydrogen-fueled proposals.

As we wrote about in Part 2, the electric technology used for cars only has to beat energy hogs that are below 10% in efficiency, our everyday car. But to qualify for aircraft use, the technology has to equal or beat what is used today, which is at the 30% to 40% efficiency level using modern turboprop or turbofan engines.

The difference is a whopping 300% to 400%. That this is ill-understood, we will see in this and following articles.

We can find this in energy-spent analysis for a typical flight, using the performance model. But before we get there, let’s do the simplest form of analysis possible, a weight check (really a mass check) of some designs.

We start with two high-profile projects where airlines (DHL, United, Finnair..) have put in provisional orders for hundreds of planes. When airlines order aircraft, they do thorough checks, so the analysis should show everything is fine, shouldn’t it?

Well, you would think so. Let’s start with the simplest of checks, which you only need elementary school math to conduct, the weight check (in high school, you learn it’s a mass check).

In Figure 2, we have gathered the weight data from Eviation and Heart Aerospace for Alice and ES-19.

The top line is the Maximum Take-Off Weight (MTOW) as communicated by Eviation for Alice and the maximum possible for ES-19 as it’s an EASA CS23 project, following rules similar to FAA 14 CFR Part 23 (CS23 and Part 23 has a Commuter MTOW limit of 19,000lb/8,618kg).

Then the line with the claim payload capacity. For the Cabin version, Evation states 2,400lb payload; Heart Aerospace says 19 passengers with bags, which we put at 220lb/99.8kg each.

The following line is the stated battery mass, 8,200lb for Alice and 3,000kg for ES-19. This gives 820kWh of energy for the Alice (at 0.220kWh/kg). Assuming the same energy density for the ES-19 battery, it has 660kWh. How far this energy will bring the two aircraft compared with their claimed range is for a later article.

When we deduce the Payload and Energy mass from the MTOW, we end up with the Empty weight, called Operational Empty Weight or OEW in airline speak.

How real are these OEWs?

The question now is; how realistic are the OEWs in the table? Anyone who has worked with aircraft will tell you: “these OEWs are totally unrealistic.” If you have learned the most basic stuff about airplanes you know the rule of thumb: the empty weight is at least half the gross weight.

In the accompanying Part 4P Paywall article, we use our performance model to show why. The model output, which uses data from 74 presently flying airliner variants, from short-haul Commuters to long haul Widebodies, made with aluminum or composites, shows that the OEW fraction (OEW divided by MTOW) never go below 47%. The short-haul Commuter class has fractions beyond 60%. We also discuss why there is no plausible reason why the above aircraft should have a lower fraction.

What can be done?

The paywall article discusses what can be done. Here is a summary:

Why has no one seen this before?

These projects have been around for years, yet no one has done this simple math. Why?

Can our abundance of industry “experts” not conduct the simplest weight calculations that you learn during the first theory lessons for a private pilot license, or are they just too lazy to put pen to paper for such checks? The amount of writing about these projects without any critical analysis is amazing.