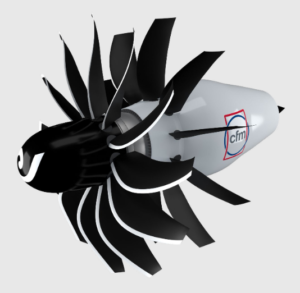 Feb. 1, 2020, © Leeham News: GE Aviation appears confident the CFM open rotor engine—a concept that was flight tested back in the 1980s—is an engine whose time has come.

But it won’t be ready when the Next Boeing Airplane (NBA) is likely to be launched. Based on market intelligence, Boeing may launch its new airplane program in 2023 or 2024, for entry into service by the end of the decade. CFM’s open rotor, which it calls open fan, won’t be ready for application to an airliner until later in the 2030 decade.

Open rotors or open fans have the potential to be about 20% more fuel-efficient than today’s Pratt & Whitney Geared Turbo Fan or CFM’s LEAP engine. (GE is a 50% partner with Safran Aircraft in CFM.) The reduced fuel consumption results in a corresponding reduction in emissions. GE’s research and development program is called RISE, for Revolutionary Innovation for Sustainable Engines.