In a sign of just how bad things are getting with fuel prices, Embraer is evaluating whether to launch a new 50-seat turbo-prop by 2015. This would challenge the derivatives offered by Bombardier on the Q400 and ATR’s new revamped series.

The AirInsight team of Addison Schonland and Scott Hamilton talk with Flight International’s Mary Kirby in this 13 minute podcast. (Subscription required.) We also discuss the P&W GTF and UDF potential.

Here’s an attractive suggestion for the New Delta, combining Northwest and Delta liveries. This comes from the Modified Airliners photos website, an enthusiast board for people who like to play with designing liveries. 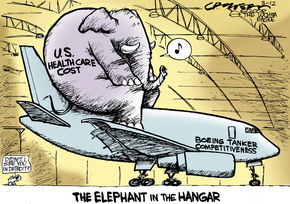 The AirInsight team comments on the Delta-Northwest merger in this 11 minute podcast.

Welcome to this new format

Welcome to this new page for news and comment by Leeham Co LLC.

This allows us to be more flexible and timely on matters Airbus and Boeing, and by extension EADS, Northrop Grumman (concerning the KC-30 tanker) and on occasion suppliers to them.

Our scheduled updates are the first, third and fifth Tuesdays of the month. Breaking news may prompt updates in between.

While this site is under construction, please pick up your news and comment at our corporate site.

We hope you’ll enjoy this new on-line newsletter format and the flexibility.