Update, Dec. 13: FlightGlobal has this interview with Ryanair and its critique of the NEO.

The (London) Financial Times has this interview with Boeing Commercial Airplanes CEO Jim Albaugh in which he says there is no compelling reason now to re-engine the 737.

Boeing believes the newly announced Airbus A320neo family merely brings the legacy A320 family to parity with the 737 or at most provides only a 3%-4% direct operating cost advantage to the NEO which can be matched by yet more refinements to the 737.

Airbus refutes Boeing’s conclusions but won’t release its own numbers, regarding them as proprietary. But in a new study, The Business Case for the Bombardier CSeries, by AirInsight,  with which we are affiliated, AirInsight’s independent analysis concludes the NEO generally has at best a slight advantage over the 737-700 and 737-800–but nothing to shout about.

AirInsight previously did a short report in which it concluded the A321G (for Geared TurboFan) improvements were such as to make this a viable Boeing 757 replacement. (This was done well before Airbus made its announcement about NEO, and the A321 is not included in the new AirInsight study.)

Wells Fargo put together this chart from the AinInsight data: 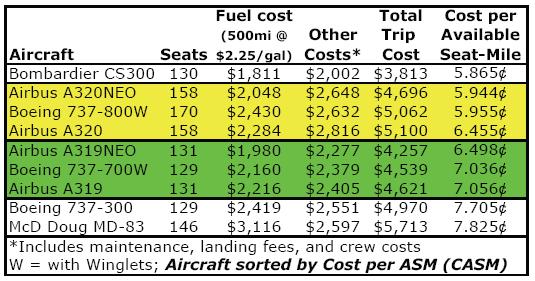 Cost per available seat mile (CASM) is the most common measurement and the data speaks for itself. In many cases, the difference is slim, as as can be seen with the A320neo v the 737-800W, virtually non-existent. However, as Wells Fargo noted in its report issued years on a variety of topics, including this one, the 737-800 has 12 more seats than the A320, which enables it to have the CASM costs it does.

Another way to look at efficiency is Total Trip Cost. The legacy A320 was not that far off from the 737-800W, and this difference probably would have been made up with the installation of sharklets alone (reducing fuel burn on the A320 by 3.5%). With sharklets and NEO, the A320 now has a $366 advantage on trip costs over a 500nm segment, a figure that will improve the longer the haul. This is an advantage of 7.2% in operating costs. This does not include capital costs, but the “Other Costs” includes landing fees, etc. Thus, one can make a reasonable argument that all-in, the DOC is reduced to Boeing’s 3%-4% assessment.

Still, this isn’t chicken feed for an industry where 1% can mean the difference between profit and loss.

Parenthetically, while Airbus claims the business case for the CSeries is destroyed with the NEO, the trip costs of the CS300 v the A319neo tells the story, too. The difference, according to AirInsight’s analysis, is $444 on a 500nm trip, or 10.4%.

So why proceed with NEO?

The A320 and A321 have been marginal US trans-continental airplanes and the A321 falls short of competing fully with the 757 on range. NEO fixes the first problems and comes close on the second. And, as AirInsight reported in its study, the sales threat from the CSeries to the A319 is real and had to be addressed. But for all the rhetoric that the NEO kills the CSeries, the A319neo EIS is slated last, for 2017; the A320neo and A321neo come first and second in 2016. The CS300, if its EIS is as promised, is in 2014, two years before the A319neo.

Douglas Harned of Bernstein Research believes Airbus made a mistake proceeding with NEO, due to risk to the A350 program. He has a case, and it is a concern that weighed on Airbus CEO Tom Enders–who was the last to sign on to the NEO program.

The engineering risk remains to the A350 remains, we think, though it is impossible to gauge it from the outside. But we find strong argument for proceeding with NEO for the A320/321 range/fuel burn gains; the A319 comes along for the ride, in our view. However, we believe Airbus should offer only the GTF and the LEAP-X and not continue offering the V2500 and CFM-56.

As for the financial cost of US$1.3bn, the engine companies will bear most of this expense; there is minimal financial risk to Airbus. We also take note of the 2016 EIS, basically five years hence. This is about one year more than Pratt & Whitney told us was necessary two years ago to develop a GTF for a 737 or A320 re-engine. We have to wonder–and this is pure speculation–if the extra year gives Airbus time to back out of the program in the event of poor sales, a different response from Boeing or some conclusion that a new airplane around 2020 instead of 2025-2027 is possible.

Bottom line: This is an interesting chess game.