E-Jet, the project that shaped Embraer

In a recent visit to Embraer in Brazil we got a thorough brief on the background and decision making around the E-Jet and E-Jet E2 programs. We have written about these programs before but we will now cover how they came about, what was the program objective when the decision was taken and how it panned out. Both programs have had and will have a profound influence not only on Embraer but the whole civil aviation segment between 70-150 seats. It is worth looking into how Embraer, once an also-ran in the regional market, rose to the top three spot in civil aviation after Airbus and Boeing and how EMB intends to stay there. 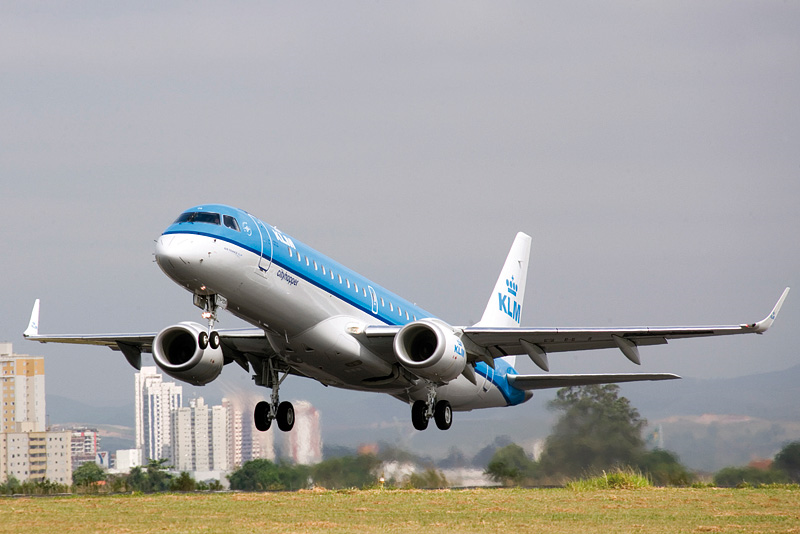 With the development of the ERJ-145 from the turbo-prop EMB-120 Brasilia Embraer avoided bankruptcy in the mid 1990s. Very quickly after the entry into service of the ERJ-145 in 1996, Embraer announced the game-changing E-Jet in June 1999. The decision to go for E-Jet had been taken the year before. With hardly a year of solid deliveries of the ERJ-145, what causes an organization to complement and later replace it with a clean sheet design, so soon after developing another airplane? Here’s the story and don’t be surprised to see history repeat itself.

The events leading up to the launch decision for the E-Jet had a by now well known setting:  American Airlines, an RFQ and two tough competitors.  The RFQ was for 50-seater and 70-seater regional jets and the year was 1997. Embraer and Bombardier bid for both. Embraer won the 50 seater (ERJ-145) but lost the 70 seater to Bombardier for the CRJ-700. The loss of the larger segment had a profound effect on the internal discussions at Embraer; it was clear that the company could not rely on the ERJ-145 for the future. Being a three-abreast development of the 30-seater Brazilia turboprop, it saved Embraer for the moment but would not carry into the future. Combined with even deeper market studies, the memory of the AA defeat lead to the 1998 decision and 1999 launch of the clean sheet E-Jet. It was designed for a 70-120 seat category where Embraer was not present. Bombardier (CRJ-700/900), Fokker (70/100), BAe (146), Boeing (717/737-600) and Airbus (318) were present. There was also the Fairchild-Dornier 728 project with a launch order from Lufthansa.

The development of E-Jet was very much a product achievement for Embraer. The maximum size of the aircraft (in 170 and 190 variants) was over double the 50 seat ERJ-135/145 and the configuration was totally new with a double-bubble fuselage offering mainline comfort in a 2+2 arrangement, engines under the wings and a classical empennage.  The engines for the smaller variant (170, later 175) were the same as for the hardest competitor, Bombardier CRJ700, General Electric CF34-8, making the E-Jet’s efficiency at best equal to the smaller CRJ700. Embraer had bet the company on mainline dimensions for the cabin and the ensuing customer comfort. 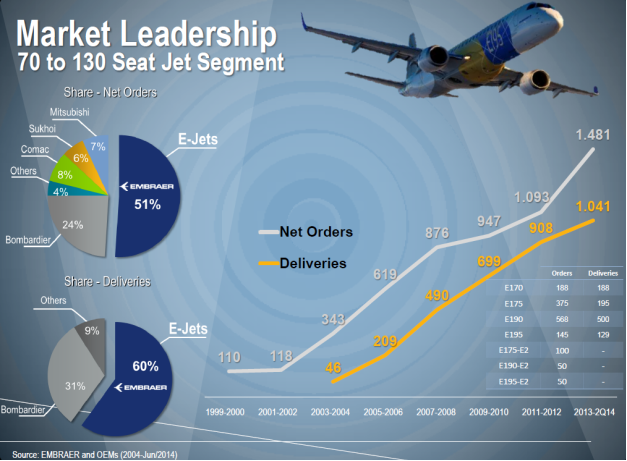 We now know that Embraer’s bet worked. After first delivery to LOT Polish Airlines in 2004 over 1050 E-jets has been delivered to date, with the 1,000th E-Jet delivered September 2013 to Republic Airlines.

During our visit Embraer candidly told us about the learning experience the new airplane, market and customer base presented. From a second place in the market for 50 seat regional jets, the E-Jet catapulted Embraer to large orders from mainline carriers like JetBlue, Air Canada and US Airways.  The sales people had to learn how to talk to mainline fleet planners and purchasers and the expectations for product support was on another level. Embraer was stretched thin to respond to engine troubles at JetBlue or cold start hydraulic issues at Air Canada.

The initial problems were resolved and in the process Embraer built a support organization that was on par with the aircraft’s capabilities and sales. Today more than 1,000 E-Jet are flown by 65 airlines in 45 countries. 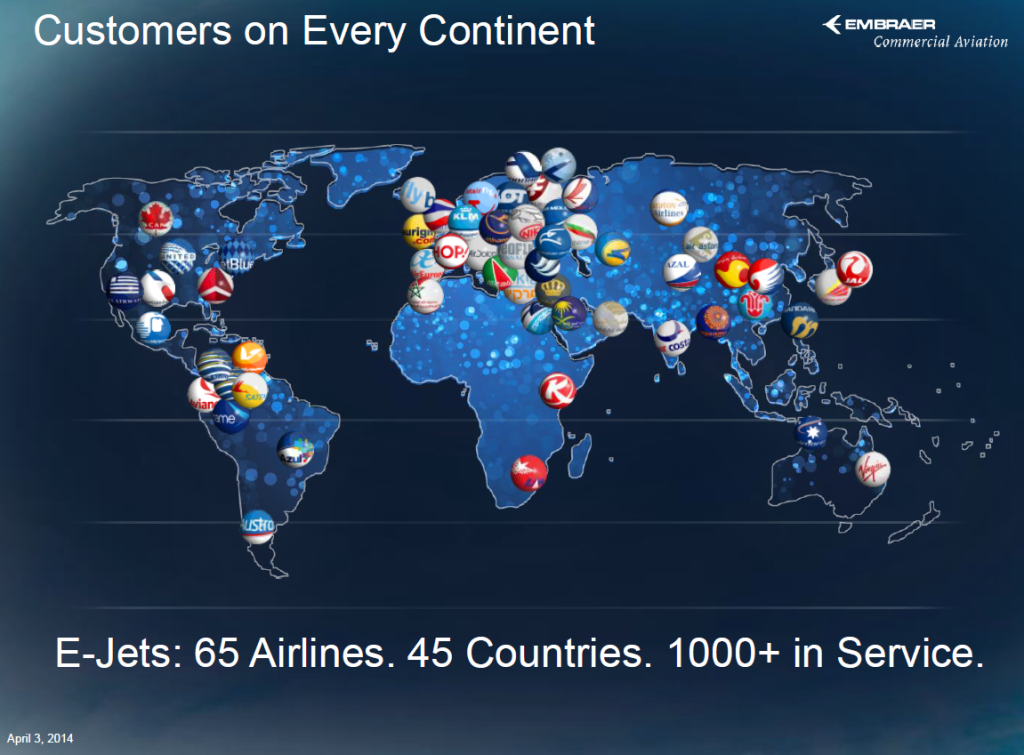 To support these and 1,300 other Embraer aircraft in operation over the world, a support organization of more than 1,200 people has been built. It manages a 24/7/365 Customer Care Center where any customer request has an answer to agreed service level time in over 95% of the cases—and EMB believes this is still not good enough. Target is to reach the bench-mark for excellence when it comes to customer support, Boeing. Embraer considers itself only trailing Airbus and Boeing today. The aim is to ultimately pass Airbus.

The way there has been long and challenging. Embraer Services & Support VP Johann Bordais told us that good ideas had been collected from all players in the market. As an example: Fokker was the leader in Web-based support. When customers told Embraer this, EMB quickly investigated, learned and rebuilt that part of their support. Boeing, on the other hand, has the best Aircraft On Ground (AOG) operation; once again investigate, learn and build. It has been an enormous change process since the days of the ERJ and the early E-Jet days when Embraer saw its role as supplying spare parts and provide “free market” MROs and airline technical departments with maintenance information. This was not good-enough for Embraer’s customers, they wanted Embraer to be active in the after market support of their products. Today Embraer operates two owned service centers, has nine authorized centers and supports 26 independent MRO organizations worldwide.

The decision to do a comprehensive mid-life kicker for the E-Jet follow on, the E-Jet E2, was natural. The aircraft still enjoyed strong sales and the fuselage and cabin was still perceived as one of the most comfortable in the market. The cross-section of 2+2 limits the covered segment to a maximum of 120-132 seats in typical coach configurations, but at the time of decision (2011), this carried the charm of not encroaching on the turf of the big two (the space of the 737 MAX7 and A319neo). The strategy was to serve the segment that E-Jet was dominating with capacity adjustments of the small segment to 76 seats (US market scope clause limit) and extending the top of the line to 132 seats. It was also necessary to increase efficiency to protect from new, more efficient entries like Bombardiers CSeries and Mitsubishi MRJ. 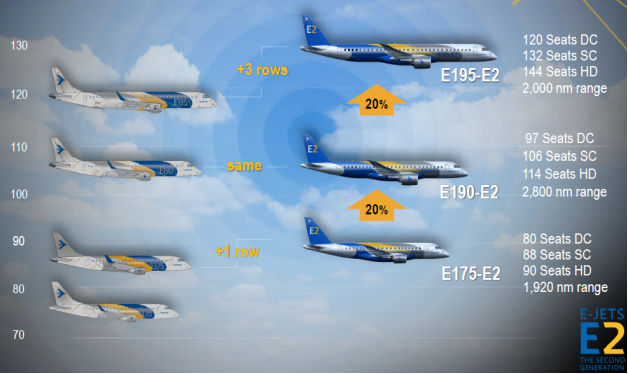 Embraer decided to build new wings for both the 175 model and the larger 190 / 195 models. Carbon Fiber Reinforced Plastic was a serious consideration for the main wingbox but in the overall trade-off, the extra cost could not be justified by the gains. Special angled tips, a bit different from the Boeing raked tips, was found to be more efficient then winglets, resulting in a total span increases of 17% and an aspect ratio increase of 20%.

The engine selection stood between General Electric CF34ng (essentially a smaller LEAP) and Pratt & Whitney’s GTF. We were told that the decision to leave GE and switch to P&W GTF was primarily made for program maturity reasons, and not for any doubts about the CF34ng’s capability to compete on performance. GE’s engine was in a projected phase and the P&W GTF engines were already running on test stands. The GTF was seen as the safer choice despite an always touchy switch in engine supplier for the product line that carries the company’s fortunes.

The other major change was to upgrade the partial Fly-By-Wire on the E-Jet (open loop empennage FBW control with ailerons still controlled via steel wires) to a full three axis FBW with feedback control of flight laws. Embraer’s own team designs the flight laws and implement them in software. Upgrade to system and cabin amenities are also included in the E2 upgrades.

The largest change for the E2 program is not all these technical changes, declares Embraer’s Senior Program Manager Fernando Oliveira. The captive market for the E2 is Embraer’s existing E-Jet customers and they expect an aircraft which works right of the box. No more maturity issues at entry into service; they expect the E2 to go into their fleet and complement and eventually replace the original E-Jets without disturbances. This has totally changed how Embraer has structured the E2 program. 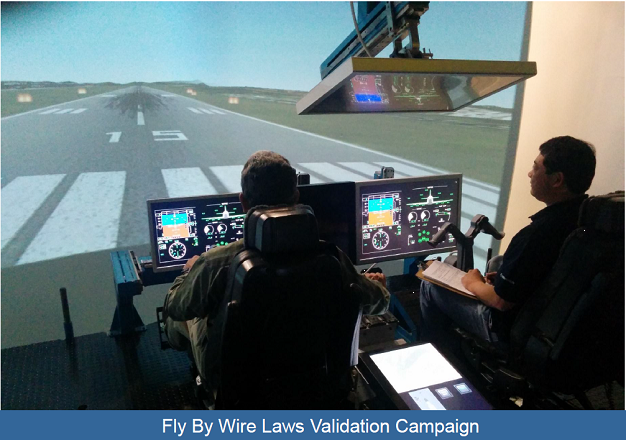 Suppliers have been retained or changed depending on how they can fulfill very stringent targets for in service maturity (ref. Engine selection). The program is planning to have run all systems in ground tests for 30.000 hours before first flight. The FBW system is already flying in virtual aircraft No. 1 which leaves two years for maturity work before first flight in 2016.

It remains to be seen how Embraer succeeds with their goal to achieve substantially higher in-service operational reliability at entry into service of E190-E2 in 2018 (then E195-E2 in 2019 and finally E175-E2 in 2020). Going through their efforts and mindset, there is no doubt they are trying hard and their reasoning and program actions bear a clear resemblance to Airbus A350 program.

We have elsewhere written about the challenge facing Embraer in the coming years, how to take the next step after the E2. This decision is less clear-cut then the E2 one, it will test the capability of Embraer of second guessing the market more then the decision that led to the E-jet E2.

6 Comments on “E-Jet, the project that shaped Embraer”