Leahy gets lifetime achievement award; CSeries could be delayed again

As the AvWeek write up details, Leahy has been instrumental in bringing Airbus to the market position it is today. We’ve known Leahy nearly the entire time he’s been at Airbus. He’s one of those love-him or hate-him kind of guys (or, in my case, like-him). Whether loved or hated, his industry accomplishments deserve respect and admiration. Joe Sutter, who is still around in his 90s as a consultant to Boeing, would be Boeing’s counter-part for the impact of his influence on the industry. We certainly can’t think of a Boeing salesman or any other contemporary in the front office who would match Leahy’s tenure and influence. In his day, Bill Allen, the long-time CEO, certainly would qualify.

Leahy’s current contract is up soon and he’s 65 this year. Whether he’ll retire is a good question. Leahy loves this business, he loves the hunt for sales and he loves besting Boeing. Boeing would undoubtedly breath a big sigh of relief if Leahy packed it in. If he does, it certainly would be start of a new era for the Big Two.

BBD has been saying its certification will come before the end of the year, but some (including this column) have suggested for some time that timing may slip into next year, most likely the first quarter. Bellemare’s comments are the first acknowledgement from a BBD official this could be the case.

We have the CSeries EIS for late 1Q2016, with a more remote chance of it slipping to 2Q. 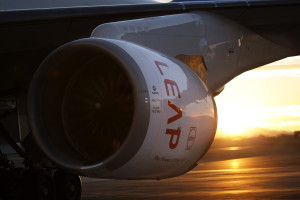 We’re not much into engine photos, but this one is pretty artsy. The CFM LEAP. Source: CFM. Click on image to enlarge.

“Because we are at the point in the program where anything we say that is model specific could reflect on the aircraft program, we are only talking LEAP total program,” an official says.

The official says the all three models of the LEAP program have “accumulated a total of 2,680 hours and 4,315 cycles of ground and flight testing. We are really pleased with the results we are seeing and we are ticking through the certification test list. We have submitted more than 50 percent of the required reports.”

ME3 v US3: The battle between the Middle East Big 3 and the US Big 3 continues, with most US media largely repeating what’s been briefed to them by the US3 and reporting the counter-statements by the ME3.

SkyWriterAviation is an exception. It’s taken a four part, in-depth look at the 50+ page document prepared and briefed by the US3. SkyWriter has yet to publish its final conclusions.

34 Comments on “Leahy gets lifetime achievement award; CSeries could be delayed again”