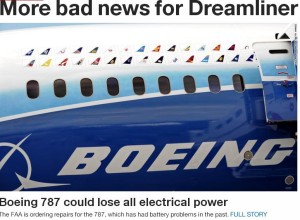 I didn’t go into detail in my article about Boeing’s “failed strategy, ineptitude and arrogance” because I thought after all these years, these were pretty obvious. Apparently not. So I’ll hit some highlights.

Go all the way back to the merger between Boeing and McDonnell Douglas. The financially-driven McDonnell family and MDC CEO Harry Stonecipher pushed onto Boeing the (failed) MDC strategy of developing more derivatives instead of developing new airplanes. The 757-300 and 767-400 were sales duds. Research and development was starved for money. Proposals for the 747-500/600/X went nowhere.

When it came time to fish or cut bait on whether to launch the 7E7 (later named the 787), debate in the board room centered around developing this airplane for much less money than it cost to develop the 777. Lynn Lunsford, then the aerospace writer for The Wall Street Journal, wrote on April 21, 2003, a detailed insider’s look at board considerations. This cost-cutting approach led to the failed industrial partnership that later so bedeviled the 787 program. Irony of irony, one board member who cautioned against overly focusing on costs was–Jim McNerney, who warned doing so could allow Airbus to overtake Boeing. His warning, it turned out, was spot on.

From this core failed strategy of international industrialization, the insidious knock-on effects have set Boeing back for decades in its competition with Airbus. If the 787 had entered service in May 2008 as planned, then Boeing was going to develop a clean-sheet replacement for the 737, followed by a clean-sheet replacement for the 777. We all know what’s happened since: Airbus maneuvered Boeing into doing the 737 MAX and, with no stomach for the risk associated with a new design, Boeing settled for an extreme makeover of the 777 in the form of the 777X in response to the A350-900/1000. The MAX 7 is the new 737-600 and the MAX 9 can’t hold its own with the A321neo.

This is inside baseball stuff, but Boeing’s sales process is cumbersome to the point of absurdity, complain Boeing insiders. There is a committee process that takes a long, long time to go through. At Airbus, when necessary, Group CEO Tom Enders, Airbus Commercial CEO Fabrice Bregier and super-salesman Leahy can make a decision in an hour, according to customers. Boeing has lost deals due to its process, Boeing insiders tell me. None of this is new; The Wall Street Journal wrote about process years ago. It just hasn’t changed.

Furthermore, while Airbus coordinates efforts between sales and support services, the Boeing insiders complain sales and its support group (Commercial Aviation Services, or CAS)–because over the high emphasis on each being its own profit center–make it difficult to offer competitive packages to match or beat Airbus.

Boeing’s arrogance is well known and decades ingrained. Wags even say the stock symbol is “BA” for a reason. Sales campaigns have been lost because Boeing refused to believe customers were seriously considering the A320 (think legacy United Airlines and Frontier Airlines, campaigns that date to the 1990s and 2000s; and jetBlue, also to the 1990s). None of this is new. The Wall Street Journal wrote about this, too.Things haven’t changed, either. Boeing sales was said to be gobsmacked when Delta Air Lines ordered the A321ceo instead of adding to its existing order for the 737-900ER.

Or that the A320neo was an inferior plane to the 737NG and would never be launched. Not only was the A320neo launched, it became the fastest selling airliner in history and Airbus flipped several 737 operators.

Think Boeing’s insistence that the 737-900ER and the MAX 9 are better than the A321ceo/neo; the market thinks otherwise, and the A321 comfortably outsells the 737 counterparts.

Do I suggest that Airbus has bettered Boeing on strategy and arrogance? In some cases yes, in some cases no. Generally speaking, Boeing’s wide-body strategy has been better than Airbus. One need look no further than the A340 to look at a failed strategy, and the A300s were inferior to the Boeing 767. Airbus had to try four or five times to get to the A350 XWB and the -800 was a dud and the -1000 has challenges. But Airbus has reached sales parity in recent years in the wide-body sector while surpassing Boeing in single-aisle market share.

Airbus is not without its own arrogance, either. But Boeing has this down to a science, with decades more experience.

127 Comments on “Pontifications: the A380, Airbus and Boeing”