May 4, 2015, c. Leeham Co. The other day one of our readers asked something along the lines, “now that Airbus has the A320neo 20% more efficient than today’s A320, how shall Boeing’s 737 MAX fair in the market? It is only 15% more effective and there are question marks around the LEAP-1B?”

This made me realize that marketing works. I decided to write about the phenomenon that the OEMs seem to find further improvements all the time and how these continually higher improvements seem to work beyond the physical laws as we know them.

The answer boils down to the fact that there is more than meets the eye around how much fuel an aircraft uses to transport people from A to B. In fact, the OEMs’ marketing departments excel within the complexity of the task and can always find a way to say “my mousetrap has now improved another x% and is therefore Y% better than yours”.

To cut through these marketing moves one need a bit of background and first grade math. Let’s see how they do it.

To understand the differences between the OEMs and how they market the new versions of their single aisles we have to start with the different positions they are in. Airbus has been test flying the A320neo  with the Pratt & Whitney (PW) engine option for six months and is about to take the LEAP version to air any day now. Boeing is more than a year from the same position with the 737 MAX and its engine LEAP-1B.

The only announcement of an aircraft trip level fuel burn improvement for A320neo came when Pratt & Whitney last July said that they will provide a GTF version with a further 2% fuel consumption improvement around 2019, i.e. four years after the aircraft has entered service. This is positive news for those that have chosen PW’s GTF. It proves that the architecture is working well and that Pratt & Whitney has confidence in its performance.

But from an analytical perspective, one must note that this announcement came after 50 GTF engines have been running since 2010 and that the version that should fly on the A320 was within two months of flying on the target aircraft and had previously accumulated 1,400 flying hours on Pratt & Whitney’s Boeing 747. It does not detract from the achievement of PW with the GTF and their confidence in the engine but one must keep the timing in mind when one judges any announcements or lack thereof for 737 MAX and LEAP-1B.

The LEAP-1B and 737 MAX will be in a similar position around two years later than PW and the GTF for A320. This is also the reason why we say, “let’s wait and see” how any rumored present-day LEAP-1B deficiency pans out when this program is at the same position as the competition. One can’t ask it to have the same maturity as the GTF years earlier than it should, and perhaps one shall not expect CFM to declare now what the fuel burn improvement shall be 2021 (which is four years after the EIS of 737 MAX first version).

So much for aircraft, the rest is the cabin

The two percent improvement from PW’s GTF would not be from day one, yet Airbus is claiming that they have raised the fuel consumption gains from 15% to 20%. Where do they find these 5%? 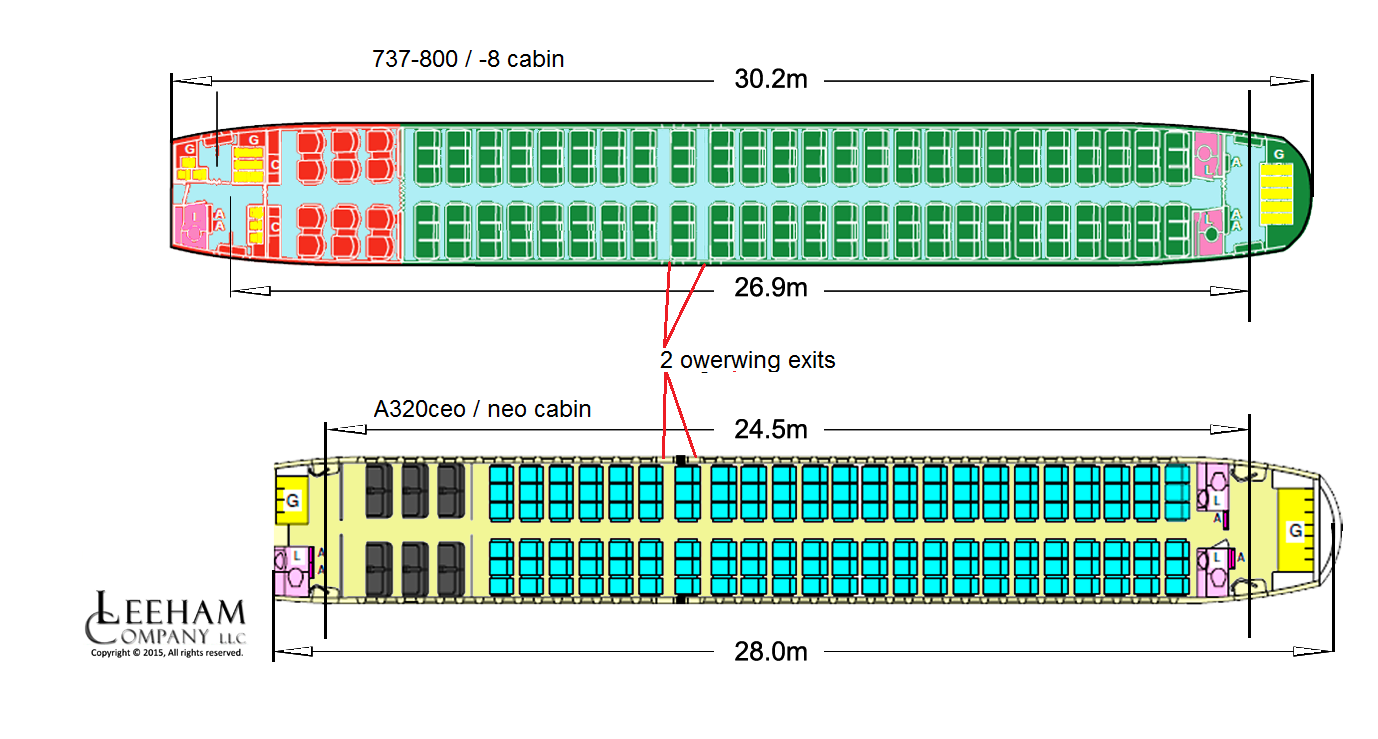 The figure is centered around the middle of the rear door for the cabins. As can be seen, the 737-800 cabin is overall 2.2m longer and 2.4m longer between the passenger entry doors fore and aft. The pictured cabin is the standard domestic two class cabin for these aircraft which have been the reference cabin for both for 20 years or more. It employs 12 domestic first class seats with 36 inch pitch and 150 or 138 economy seats with 32 inch pitch respectively.

It shows a larger cabin for 737 and based on the difference in seating capacity, Boeing has always talked about per seat for any economy parameter, fuel included, and Airbus has talked on an aircraft trip level as the shorter aircraft is slightly more efficient than the 737-800. By sticking to this apples-and-oranges method of comparison, both could make their claims of being superior and not telling any lies.

Recently Airbus has been changing tactic; they have also started talking per seat. Should they have stayed with the established 150 seat two class cabin, this would have been stupid but they haven’t. Airbus has used four facts to start turning the per seat tables on Boeing:

The first that Airbus set out to do was increasing the useful length in the cabin for seats. The only way to do that was getting rid of the two rear lavatories and pack them together with the galley in the rear. This is how the Space-Flex program started. The goal was to keep as many trollies of catering storage as possible and to get a dual lav in there as well.

Through a lot of work (Airbus say they have passed eight different variants) they have now a solution which leaves four trollies out of the original seven stacked with a dual lav which also can work as one PRM (Person with Reduced Mobility) lav, Figure 2. 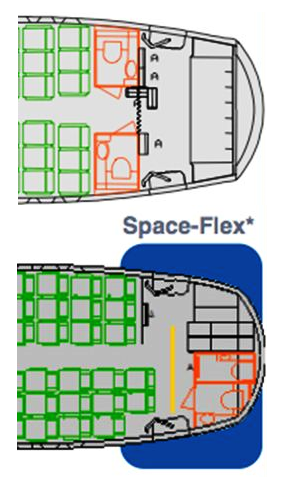 Figure 2. Airbus final (or should we say latest) A320 Space-Flex variant. Source: Airbus.

With this move, another 37 inches was freed up in the cabin which allowed additional seats to be placed there. If this would have been done on the standard cabin level, Boeing could have countered in the marketing war with similar moves. To win the battle on per seat efficiency, Airbus therefore moved the playing field away from the standard domestic two class cabin and into the high density LCC domain where they could position the comparison so close to Boeings exit limit that Boeing could not counter with making the cabin denser.

Figures 3 and 4 show the result. Figure 3 shows a one class LCC cabin with 189 seats, enabled with a Space-Flex rear section. The seat count is the same that can max be fitted in a 737-8.

Going from 180 to 189 seats increases the per seat efficiency with the  five percent we need to reach 20% efficiency improvement, Figure 4, and Boeing can’t respond unless they go 737 MAX 200 with additional exit doors. 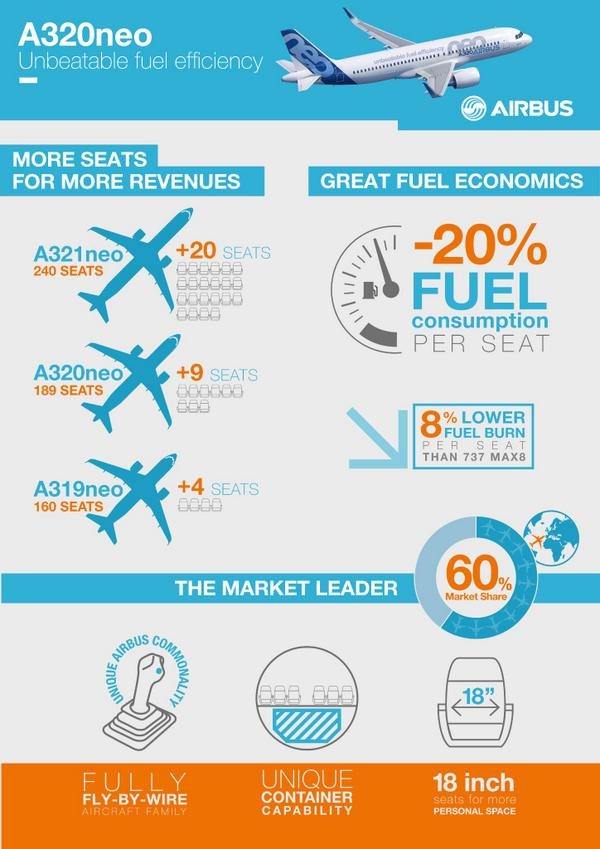 Had the comparison stayed at the usual two class cabin, the extra four seats would have brought 2.7% fuel burn improvement per seat and Boeing could easily have countered by increasing the density of the MAX 8 cabin. Had the operator not been able to accept a reduction in servicing capacity, i.e. to go from seven trollies aft to four there would have been virtually no seat improvements as the storing of three trollies in the cabin takes 2.4 seats out of the four gained in a normal config (a galley CART takes 80% of the space of an economy seats).

For a long time the real and bragging rights fight between Airbus and Boeing that “we have the best aircraft” was fought with aircraft level arguments like “better wing,” “lower weight” or “better engines.” This was a battlefield which the aircraft buyer and the interested public learned to understand.  Arguments were “simple” and done with technical facts, results could be debated but were easy to grasp.

Today the fight has moved to a more sophisticated level. It is all about the “per seat” thing and the tackling and feinting is around lavatories, galleys, CARTs, seats, exit limits and how all this suddenly makes a classical 150 seater the new LLC wonder of 189 seats and more.

One hundred eighty seats used to be the domain of A321 and 737 MAX 9. These have now moved beyond the 200 mark and their fight is a story as interesting as the one around A320 and MAX 8, but that is for another time.

71 Comments on “The higher level game”