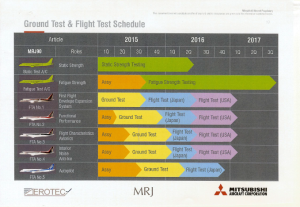 The MRJ90 testing and entry into service timeline. Source: Mitsubishi. Click on image to enlarge.

August 3, 2015, © Leeham Co.: Mitsubishi Aircraft Corp. today opened its Seattle Engineering Center jointly with local company AeroTEC in advance of the first flight of the MRJ90 in September or October. During the second quarter of next year, four of five MRJ Flight Test Vehicles will be domiciled in Moses Lake in Central Washington for the bulk of the flight testing over the following year. Entry into service is planned for 2Q2017 with launch customer All Nippon Airways.

The engineering center represents the first in Washington State for an aircraft OEM other than Boeing. Mitsubishi will assign 50 engineers from Japan to the new SEC, in South Seattle a short distance from Boeing Field. One hundred engineers will be hired locally.

AeroTEC and Mitsubishi began discussing working together only last January, said president Lee Human, who added that the seven months from January to the opening of the SEC today was remarkable for the speed in which negotiations, contracts, permits and hiring was achieved.

“This is a big milestone with the opening of the Seattle Engineering Center,” said Nobuo Kishi, Senior Executive Vice President of Mitsubishi Aircraft Corp. “This combines the engineering” of Japan and the US. 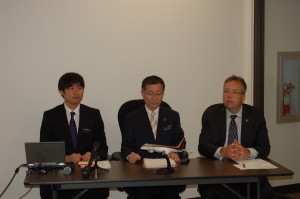 Executives Mitsubishi Aircraft Corp of Japan and AeroTEC of Seattle answer questions during the opening of the Seattle Engineering Center near Boeing Field to support the MRJ90. L-R: Kenichiro Honda, VP of the SEC and MAC America; Nobuo Kishi, Sr EVP, MAC; and Lee Human, president of AeroTEC. Click on imagfe to enlarge.

Kenichiro Honda, VP of the SEC and Mitsubishi Aircraft Corp. of America, noted the market into which the MRJ90 is entering is hotly competitive, with the Bombardier CRJ900, the Embraer E-190, the Sukhoi SuperJet and the COMAC/AVIC ARJ21 are all competitors. The MRJ90 will be the last of this group of airplanes, but Kenichiro said that being a clean-sheet design, the MRJ90 has the advantage of new engines, new systems and new aerodynamics that combine to be 15% more efficient than the market leader, the E-190.

The MRJ comes in two versions, the MRJ90 and the smaller MRJ70, but Nobuo said that the MRJ70 remains in development with no timeline he was prepared to reveal.

The MRJ90 weighs more than allowed under US Scope Clauses today, an important factor in that regional carriers SkyWest Airlines and Trans States Airlines have 150 of the 223 firm orders and 150 of the 184 options and purchase rights. Unless Scope Clauses are relaxed by the time these carriers are schedule to take delivery beginning in 2017, technically the regional airlines won’t be able to fly them for the major carriers.

Bombardier is counting on no relaxation to give a shot in the arm for sales of the lighter weight CRJ-900 and CRJ-1000.

Nobuo believes relaxation will be forthcoming in time for the new airplanes to enter service in the US. Embraer needs relaxation by 2020 when its E-175 E2 next generation E-Jet is scheduled to enter service. Like the MRJ90, it’s heavier than allowed in current Scope Clauses. (The larger and heavier E-190/195 E2 don’t have US sales at this point.)

About 200 people will be employed at the MAC flight test center in Moses Lake. MAC officials said that the good weather and open air space are key reasons why this site was selected, thousand of miles from Japan, to undertake an accelerated flight testing program.

Washington Gov. Jay Inslee, US Sen. Patty Murray, US Rep. Susan Delbene and and several other officials made brief remarks welcoming MAC to the State.