Aug. 2, 2016, © Leeham Co.: Boeing officials increasingly downplay the prospect of the 787 production rate increasing to 14/mo by the end of the decade from the current 12/mo, reflecting uncertainty over the strength of the wide-body market in the near-to-medium term.

Dennis Muilenburg, CEO of The Boeing Co., said during the company’s 2Q2016 earnings call July 27 that “we haven’t pinned down a specific decision point [on ramping up to 14/mo] yet because we’re going to keep a close eye on the market. The signals from our customers, we’ve got time to do our due diligence here. 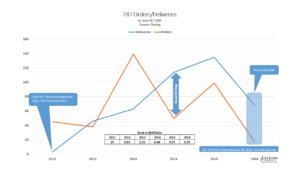 Figure 1. Boeing 787 Orders and Deliveries. Click on image to enlarge.

“Our principle here is to keep wide body supply and demand in balance. And we’re confident in the 787 program across that span of scenarios, and we’re going to continue to work campaigns to fill out to the 14 a month rate step-up, and we’ll evaluate timelines and decisions around that. But you can be very confident that whatever we decide, we’re going to keep supply and demand in balance. We’re going to do it efficiently and productively, and all of this again is enveloped by our expectation of a year-over-year cash growth business.”

Boeing noted that the program is sold out in 2018 and has some slots available in 2019. At rate 12, the likelihood of these slots being filled may be challenging. Although the number itself isn’t great—27, according to Ascend—finding enough customers for delivery in 2019 could be challenging in the current soft environment, and with competition from a much lower priced Airbus A330, whether a CEO or NEO. The challenge becomes greater the farther out in the future.

If Boeing went to rate 14, this is another 24 airplanes per year that have to be sold. (Figure 1.) 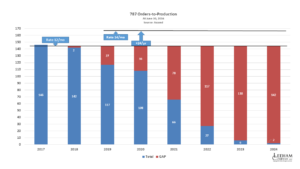 Figure 2. 787 production rates and gap. Click on image to enlarge.

Looking at the book:bill trend since the 787 entered service in December 2011, Boeing has good reason to be cautious about upping the production rate. The last time Boeing sold more 787s than it delivered was in 2013. The book:bill rate was just 0.73 last year and so far this year, it’s an anemic 0.25. This could change dramatically if Boeing becomes the winner in the long and heated contest for the Emirates Airline wide-body order expected before year end. The 787-9/10 are in competition against the Airbus A350-900 for at least 70 aircraft.

But even if Boeing wins this order, the book:bill rate will be well below the production rate of 144 airplanes a year, absent other orders. In fact, since the 787’s EIS, there has been only one year (2012) once full deliveries ramped up when the book:bill exceeded one. (Figure 2.)

Analysts on the 2Q earnings call were quick to note the caution flag raised by Muilenburg and CFO Greg Smith. The following two excerpts from research notes issued after the call are typical.

Realistic commentary on 787 rate and 777 bridge: Although a debate on the prudence of a further rate hike to 14 for 787 rates has been ongoing for a few months, BA spoke to the possibility that it may not happen if the company deems the backlog does not support an increase.  While this would extend the deferred recovery by ~six months as per CFO Smith, we view the difference as minimal. However, we think there could be some unit profit impact toward the end of the block due to fewer units absorbing fixed costs, which we think could possibly result in a charge at decision time. BA does not see the decision time regarding the rate for another couple of years. On 777, CEO Muilenburg acknowledged that the current sales pace needs to accelerate even to meet reduced targets of 7 per month in 2017 (80% sold out) and 5.5 per month in 2018 (60% sold out).

On the 787, Boeing is reassessing plans to raise production from 12 to 14/mo by the end of the decade to ensure supply and demand are properly aligned, a move that makes sense in our view, given the demand environment, even if there is no need to foreclose the possibility yet. The next question, however, is the sustainability of the 12/month rate into the next decade but this is still several years away.

Burning off the backlog 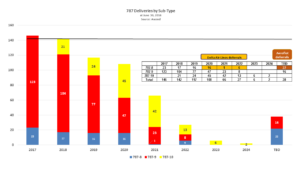 With a book:bill history of less than one, Boeing is rapidly burning off the backlog at rate 12. There were just 742 787s in backlog at June 30, according to Boeing’s website. There is an emerging production gap, as one would expect the farther out the future. However, by 2020, Boeing’s production gap really kicks in. (Figure 3.)

Although by the numbers Boeing is scheduled today to deliver 108 787s in 2020, 11 of these are 787-8s ordered by Northwest Airlines, now part of Delta Air Lines. Delta deferred these several times and is known to not want the 787-8s. The others are for Iraqi Airways, hardly a solid order, and Biman, which may also be iffy. This reduces the likely 2020 deliveries to 92 vs 144 production slots. The 2021 and 2022 787-8 deliveries are also for Delta. The 22 TBD 787-8s are those for Aeroflot, which has all but canceled this order.

Boeing’s caution against raising the production rate now becomes clear after looking at the numbers and considering market conditions. These factors clearly argue for maintaining a stable rate of 12/mo.

The question that arises, however, is whether rate 12 is sustainable—or whether the production rate may actually have to be cut in the not-too-distant future.

(It should be noted that there are about 70-80 orders for delivery beyond 2020 that are not in the accounting block, which LNC understands extends only through 2020 at this time.)

Based on history, the raw numbers are achievable. The more important question remains: what will the delivery streams be if these numbers are reached? The streams will dictate what production rates will be in the future.

There are at this early date all sorts of variables and caveats to consider. But it’s also time to start thinking about the What Ifs.