Looking under the hood at the Qatar order

The latter was characterized as a “blow” to Airbus, which has been the target of high profile, public attacks by Qatar’s CEO, Akbar Al-Baker, over issues related to the

A320neo and A350-900. Qatar is a launch customer for each, and each has been delayed due to supplier issues from Pratt & Whitney and Zodiac, respectively.

What Al-Baker expects Airbus to do about PW and Zodiac has never been made clear, but it’s the Airbus name on the airplane, so it’s Airbus that is the target of Al-Baker’s well-known wrath.

Al-Baker refused delivery of the first couple of A320neos due to the engine issues and threatened to turn to the Boeing 737 MAX in retaliation.

The announcement Friday was viewed by some media and aerospace analysts as following through on that threat and delivering a “blow” to Airbus.

But an LOI is the lowest form of a “commitment” to an airplane and one that doesn’t typically even involve deposits.

The order for 10 777-300ERs and 30 787-9s is exercising previously existing options. The delivery streams weren’t announced.

The -300ERs are a welcome addition to the Boeing order book, for there were only six net sales this year before inking this contract. There were eight, but lessor Intrepid Aviation canceled two in exchange for taking two Boeing 747-8Fs into its portfolio for lease to an existing 747 customer. Market reports were widespread that Intrepid couldn’t find homes for the two -300ERs due to lack of demand and its lease rate goals.

So Boeing now has 16 net 777 orders this year, against a target of 40-50. In January, LNC examined the 777 Classic production gap and illustrated big holes next year and in 2018. It’s important to remember that the gap continues well past the 2020 EIS of the 777X, which has a slow ramp-up.

This analysis was before Boeing announced rate reductions and, of course, before any orders.

Boeing has a lot of work to do to fill the gap with new orders. More likely, another rate reduction is coming. Morgan Stanley just issued a note predicting a rate reduction to 3.5/mo. Other analysts suggest 4/mo, which is the figure a supplier told LNC last month.

Qatar’s announcement of an LOI for the 737-8, rather than being a “blow” to Airbus, draws a fair amount of skepticism when one looks under the hood, so-to-speak.

An LOI is the lowest form of “commitments” to an airplane. The line-up is firm Order, followed by Option, Memorandum and then LOI. No deposit of money comes with an LOI.

For all the public threats by Al-Baker to turn to the 737-8, an LOI doesn’t exactly strike fear in the hearts of Airbus or PW. All the public tantrums are viewed as negotiating ploys, and this could be a step in that direction as well. 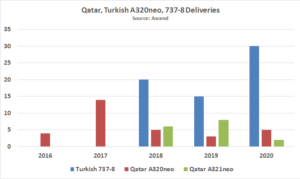 “It makes no sense to fly a mixed narrow-body fleet,” LNC was told by a source who knows Al-Baker and Qatar’s fleet and route planning. This source called the LOI a “theatrical” tactic directed toward Airbus that, in the end, won’t be tolerated at levels in the Qatari government in order to avoid hurting government-to-government relationships with France.

Al-Baker said the MAX would be delivered in 2018. The obvious question is where Boeing would find the slots to meet this schedule.

Turkish Airlines may provide the answer.

It also was revealed Friday Turkish will delay 737 MAXes and A320neos on order because of the internal turmoil and terrorist activity in the country.

Al-Baker said the 737-8s are for growth, not to replace a canceled A320neo order. But it’s been suggested to LNC Al-Baker is facing a growth slow-down (as is Emirates Airlines, though at very different levels) and doesn’t want the A320neos right now anyway—hence the campaign against Airbus and refusal to take deliveries.

If there is truth to this, then an “order” for 737-8s doesn’t make sense—except as a way to annoy Airbus.

If the Turkish airplanes are those destined for Qatar, at least in theory, the contract needs to be firmed early next year at the latest to spec out the Buyer Furnished Equipment Al-Baker will want.

The next several months will be a time to watch closely to determine whether Al-Baker delivered a “blow” to Airbus—or was just blowing smoke, again.

← Pontifications: Airbus, Boeing and Qatar; and more on the WTO
Airline assets and lessor assets: Bombardier and Embraer →

40 Comments on “Looking under the hood at the Qatar order”