Dec. 19, 2016, © Leeham Co. Two thousand sixteen is almost over. This will be my last Pontifications of the year.

We approach our job with a little different perspective than the daily newspapers and aviation trades. They have greater resources than we do and have a greater ability to report the news. So LNC tries to bring news with perspective that those outlets don’t.

We provide analysis of events and of aircraft economics and performance. Not even the trades do the latter. We also make our own forecasts of trends and production rates. Sometimes it takes a few years to be proved right or wrong. So far, we have a good track record of being right.

We’re also not afraid to take on controversy—and be controversial. And we don’t hesitate to call bullshit when we see it.

This gets often us into hot water with the subjects of the controversy.

This is what sets LNC apart. 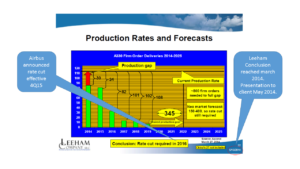 Leeham Co. identified the A330 production gap in March 2014 and predicted a production rate cut for 2016. Click on image to enlarge.

As early as March 2014, we began predicting production rate cuts would be necessary for the Airbus A330 and Boeing 777.

Production rate cuts are sensitive to the companies. It signals weakness in future sales. It means lower revenues and lower cash flow. 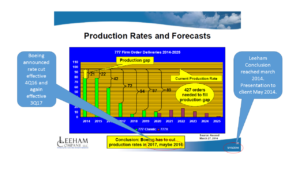 At the same time, Leeham identified the production gap for the Boeing 777 and predicted a rate cut would be necessary in 2016 or 2017. Click on image to enlarge.

Using the same methodology, we see a potential production rate cut for the 787 in 2019 or 2020 from 12 to 10/mo. There is a production gap of 27 and 36 airplanes respectively (before taking into account the Qatar Airways orders this year). Over the last three years, the book:bill sales for the 787 was only 0.47:1 (before Qatar). This isn’t enough to sustain rate 12.

Reflecting this weak sales demand for the 787, Boeing recently decided not to extend the accounting block from 1,300 to 1,600. This is a necessary move to help recover the $27bn in deferred production costs for the program. (Add $3bn in deferred tooling costs.) 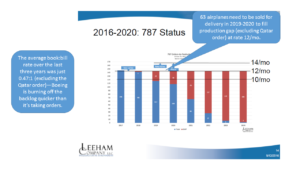 Boeing is burning off its 787 backlog faster than it’s making sales. A production rate cut in 2020 seems possible. Click on image to enlarge.

The debate over the demand of the Very Large Aircraft (VLA) sector was a hot one. Airbus stubbornly sticks to its 20-year forecast that there will be a demand of 1,200-1,700 VLA-Passenger and VLA-Freighter aircraft (depending on the year of the forecast). Boeing’s forecast has been in a steady decline.

We’ve criticized the Airbus forecast for its relatively unchanging view since 2000, when the A380 program was launched. It’s simply unrealistic in the face of the development of the 787, the A350 and the 777X—all of which serve to further fragment global routes that were already being fragmented by the A330 and 777-300ER. 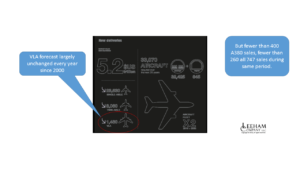 Airbus hasn’t significantly changed its 20 year forecast for Very Large Aircraft since 2000, despite the development of the Boeing 787 and 777X and Airbus’ own A350. Click on image to enlarge.

Airbus’ 319 A380 sales to date compare with total program sales of 650 it forecast, according to the lawsuit between Rolls-Royce and Pratt & Whitney that was filed several years ago. Airbus figured it would capture half the VLA market. It’s capturing almost all of it today.

Airbus isn’t the only one to play with data. Boeing is notorious for doing so. 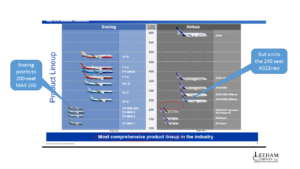 Boeing disappeared the 240-seat Airbus A321neo, leaving the impression Airbus has a product gap that doesn’t exist. Click on image to enlarge.

As far back as 2010, we pointed out that assumptions used by Airbus claiming an advantage for the A330 (this before the neo) over the 787 were skewed.

LNC on many occasions challenged Boeing’s public presentations in which it compared its airplane data vs Airbus. Invariably, the Boeing data was pumped to look better than Airbus.

Look at this example, taken from Boeing’s May investors’ day, during which officials touted the most comprehensive product line in the industry.

Boeing completely omitted the A321 240-capacity version while including the 737 MAX 200, including instead the 168-seat A321LR international configuration.

This left a capacity gap for Airbus that doesn’t exist, while touting a smaller gap in Boeing’s own product line.

The ascension of Dennis Muilenburg as CEO of The Boeing Co. brought more candor than existed under former CEO Jim McNerney. The appointment of Kevin McAllister as CEO of Boeing Commercial Airplanes is new enough that no indication of his candor can be assessed yet.

Perhaps the New Year will answer the questions of McAllister’s direction.

28 Comments on “Pontifications: Leeham News’ approach to the news”