Feb. 20, 2017, © Leeham Co.: Boeing’s long-term messaging that all is well isn’t resonating with a number of industry analysts and observers.

To be sure, today and in the short-term, Boeing’s stock is on a steady upward trajectory.

But aerospace analysts are not buying into the long-term message.

Neither did three speakers at last week’s annual Pacific Northwest Aerospace Alliance (PNAA) conference in Lynnwood (WA), including me.

Boeing CEO Dennis Muilenburg repeated on the earnings call that taking 787 production to 14/mo remains under consideration. None of the analysts whose notes I receive, including those with Buy or Outperform ratings on Boeing stock, believe this will happen. None sees the demand justifying this.

Muilenburg also said on the January earnings call Boeing sees “no scenario” under which production will go below the current 12.

Several analysts see rate 10 after 2020, including Goldman Sachs and JP Morgan. One, Buckingham Research, last Monday predicted rates will have to come down to 7/mo after 2020.

At the PNAA conference, consultant Michel Merluzeau sees a rate less than 12/mo and no possibility of a rate going to 14/mo. LNC previously forecast rate 10 after 2020. 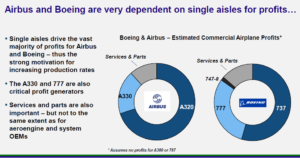 Many analysts don’t believe Boeing will be able to recover all the deferred costs on the 787 program, which amount to nearly $30bn.

Many believe that at best, Boeing will fall short about $6bn to $7bn. A few think the shortage will be higher.

Consultant Richard Aboulafia, speaking at the PNAA conference, likewise predicted Boeing won’t recover the costs, but in a colorful metaphor.

In his presentation at the PNAA conference, Kevin Michaels of AeroDynamic Advisory outlined why he believes Boeing must increase the production rates of the 737 to 57-60/mo.

Because of the declining production rates of the 777 Classic, which he estimates provide a profit margin of 20% per plane, Boeing will lose $1.3bn in profits in the coming years.

Increasing the rates on the 737, with his estimated 30% profit margin, will add $2.5bn in profits during the same time. 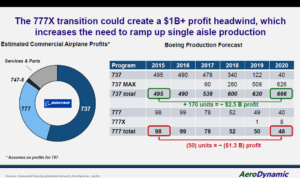 In my own presentation to PNAA, I said Boeing is on the defensive in the single-aisle arena.

I was clear that Boeing isn’t in dire shape, by any means, not with a 737 backlog of 4,400 family members (3,612 of which are MAXes). But for a company that once led the single-aisle sector by a wide-margin, to be down to 39% is an anemic showing.

Randy Tinseth, VP of Marketing, responded later in an email:

First, you know that orders are important but deliveries are what really matters.

We have been and expect to be at market share (delivery) parity with Airbus into the next decade. Fifty percent share is a good place to be.

Second, I assume you are using Ascend data – it’s important for you to know that it is at best a rough estimate and is generally inaccurate.  We do not post 737 MAX model mix on our Orders & Deliveries website.  This is because most of our customers have the flexibility to select model type lead time away.

Finally, our best estimate is that between 20 and 25 percent of 737 MAX deliveries will address the top end on the single aisle segment.

Indeed, in LNC’s own analysis last September, we concluded Boeing has more upside to sell 737s than does Airbus to sell A320s.

While Boeing doesn’t post the MAX sub-types, only some 60+ MAX 7 orders have been specifically announced and fewer than 300 MAX 9 orders have been so identified. Boeing also told some that the MAX 9 only represents 9% of the backlog, which computes to about 325 aircraft.

Airbus, it turns out, has more A320 family members in service today than Boeing has 737s. Also, since the launch of the A320, Airbus sold more A320s than Boeing did of the 737s—albeit, the difference is only several hundred aircraft out of more than 12,000 sold by each company.