Airbus ends the A380 program 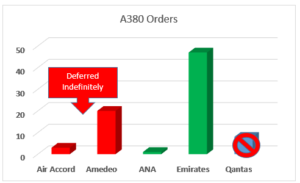 Toulouse) that it is terminating the A380 program.

The last airplane will roll off the assembly line in 2021, for Emirates Airlines.

The Emirates and Airbus press release is here.

The move had been anticipated years, with speculation increasing in recent weeks as news emerged that Emirates, the largest customer by far for the airliner, couldn’t reach agreements with the engine makers on improvements; Qantas Airways canceled an order for eight in a long expected move; and Qatar Airways said it will start retiring its A380s at age 10.

Speculation also arose that Tom Enders, who retires as CEO in April, would kill the program to clear the decks for his successor, Guillaume Faury.

“The consequences of this decision are largely embedded in our 2018 full year results,” Enders said in a press release. The earnings will be released in a few hours.

With a production rate of 6/yr, the A380 is at best about break-even.

When Airbus launched the A380 in 2000, the market was very different.

The Boeing 777-300/ER was launched the same year, but the plethora of twin-engine, twin-aisle, long range airplanes had yet to come. 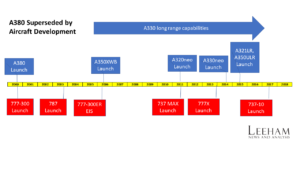 The Boeing 787 was first, in December 2003. It was followed in succession by the A350, A330neo, increased range of the A330ceo, the 737 MAX and the A321neo/LR. Each airplane further fragmented markets that otherwise would go through hubs to fill the A380.

Airbus based the business case in part on analysis that passenger traffic doubles every 15 years and airport congestion would require the A380. It’s a story that’s been peddled since 2000, right through yesterday.

Simon Pickup, a middle manager who presents every year at the Pacific Northwest Aerospace Alliance annual meeting in Lynnwood (WA), acknowledged an announcement was expected Feb. 14 (Toulouse time, 9pm Wednesday Seattle time). He carried the long-standing Airbus message about the traffic and the need for Very Large Aircraft (now called Xtra Large in the Global Market Forecast). But he didn’t have advance information about the announcement.

Cebu Airlines at one point configured the A330-300 with more than 400 passengers. Air Canada configured the 777-300ER with 458. The 777-9 nominally carries 425 in standard three-class, international configuration.

Boeing had been reducing the VLA category forecast for years, to a few hundred, before doing away with it entirely a year ago. Boeing’s forecast now goes to 300 seats, with 777s, A350s and A330-900s falling within this sector.