July 22, 2019, © Leeham News: Embraer still appears to be in a bit of a holding pattern following the Paris Air Show in which it announced orders and commitments for only 76 EJets. Two additional orders announced at the show were previously under the Unidentified category.

This seems to be following a pattern set with the Bombardier C Series, in which sales were slow while the market waited for the deal to close in which Airbus acquired 50.01% of the C Series program.

After the transaction closed, effective July 1 last year just before the Farnborough Air Show, Airbus announced at the international event orders from Moxy Airlines and JetBlue for the C Series, renamed the A220, for 60 each.

Bombardier started the negotiations. In the case of JetBlue, Airbus’ last minute majority ownership of the C Series proved to be decisive, LNA was told at the time. A “kicker” for A321neos, wrapping the A220 into the package, proved more than Embraer could overcome for its E195-E2. As the incumbent carrier, with E190-E1s at JetBlue, market intelligence indicated Embraer was favored in the campaign. 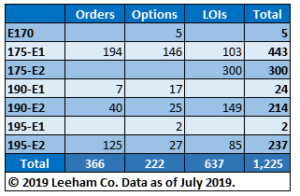 Airbus announced a follow-on order with Delta Air Lines by the end of last year, but sales of the A220 are taking off this year.

Lessor Air Lease Corp announced an order for 50 at the Paris Air Show. ALC’s endorsement is like the Good Housekeeping Seal of Approval, which in the US has long been a consumer branding gold stamp on products.

Air France-KLM Group is poised to order up to 110 A220s as early as this month. A320neos will be wrapped into this deal. (The Group is also said to be planning an order for the Boeing 737 MAX.)

Ever since the Boeing-Embraer joint venture was announced, sales slowed—just as they did for the already-slow-selling C Series.

There are only 366 firm orders for all EJet types through mid-July, according to data reviewed by LNA. Fifty-three percent of these are for the E175-E1, principally from US Scope-Clause restricted regional airlines. The E175-E2 does not meet Scope requirements. At the moment, all 300 Letters of Intent for this model are from two US regionals, Skywest Airlines and Trans States Airlines. But these can’t be firmed up for use on behalf of US majors unless Scope is relaxed, an unlikely prospect any time soon.

The US accounts for about half the world’s regional jet market. This leaves the entire E2 family qualified everywhere else. So far, the E195-E2 is the preferred airplane. It accounts for 125 of the 165 firm orders for the E2.

At the pre-Paris Air Show Media Days, John Slattery, president of Embraer Commercial Aviation and CEO-designate of Boeing Brasil-Commercial, said certification of the E195-E2 will spur sales. The first airplane enters service with Brazil’s Azul Airlines in the second half this year.

But certification didn’t boost sales, so far, for the smaller E190-E2. It has only 40 firm orders.

However, when Options and Letters of Intent are considered, the picture changes dramatically.

All-in, Embraer has 1,225 orders, options and commitments for the E1 and E2. It’s a matter of speculation how many will be converted to firm orders. It’s assumes most E175-E1 orders and commitments will be converted to the E175-E2 eventually. But in this case, “eventually” depends on Scope relief and with any change appearing to be off the table in current negotiations this year and next, 2023-24 is the next opportunity. Based on today’s pilot aggressiveness in contract negotiations, people are not hopeful about a change then.

This results in some wondering of The Boeing Co. will continue the E175-E2 program after the JV is closed, targeted by year end. Slattery, the CEO-designate of Boeing Brasil, won’t comment in advance of the consummation. In the meantime, he’s pressing ahead to finish the prototype, now in production, with a goal of first flight by year end.

The decision post-closing won’t be his to make. Boeing will own 80% of Boeing Brasil-Commercial and the board of directors will be dominated by Boeing designates. It may well be the E175-E2 becomes the Airbus A330-800 of BBC: a fine airplane with few customers (the A330-800 has only 10 orders so far).

But with Boeing’s marketing heft, more expansive global services base, a much larger customer base and the ability to wrap 7-Series orders with the E2—all in the same manner that Airbus can between the A -Series and the A220—Slattery has high hopes that E2 sales will take off once the JV is closed.