Bombardier’s rescheduled flight test schedule, reflecting a 9-15 month additional delay to entry-into-service (now the second half of 2015), hasn’t been publicly detailed. BBD presents to the International Society of Transport Aircraft Traders (ISTAT) at its annual US meeting this week in San Diego, and there is an investors day later in the week. We expect one or both venues to provide program updates.

The new EIS narrows the gap between the CSeries and its competitors, the Airbus A319neo, the Embraer E-190/195 E2 and the Boeing 737-7 MAX. But the impact isn’t significant, in our view. Airbus’ A319neo—the direct competitor to the CS300—was to be the first of the re-engined challengers to the new-design CS300 with an EIS originally set for the first quarter of 2016 (six months after the A320neo EIS of October 2015). But Qatar Airways, the launch customer of the A319neo, dropped this order in favor of the larger A320neo. The A319neo EIS is now slated for the second half of 2017, for Avianca Airlines. 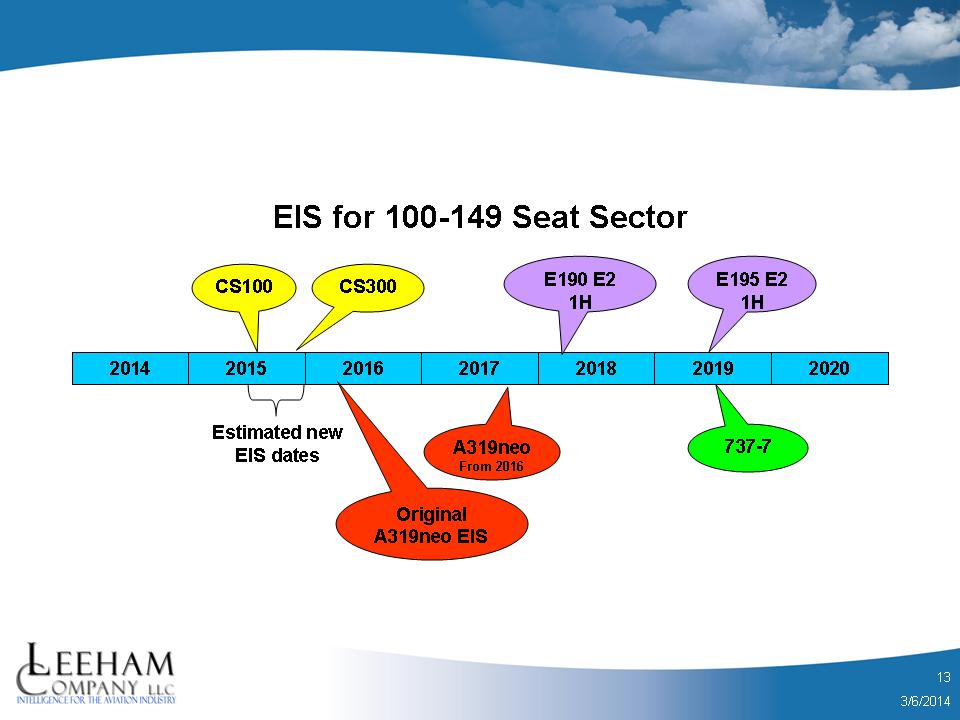 This means the original two-year gap between the CS300 and the A319neo remains the same, assuming no additional delays for the CSeries and none for the A319neo.

Parenthetically, we are unsure if Frontier Airlines will take its order for 20 A319neos, with first delivery scheduled in 2018. When we talked with CEO David Siegel two years ago, he expressed doubts about taking the airplane, preferring the larger A320 sibling. The only other announced customer is Avianca, with a firm order for nine. Will Avianca ultimately take the A319neo, particularly if Frontier swaps its order? We have our doubts. There is an unannounced customer for the A319neo for eight, according to the Ascend data base, but delivery dates currently are listed as “2500.”

The Embraer E-190 E2 nominally competes with the CS100; it’s barely within the 100-125 seat category in a one-class configuration, while the CS100 is comfortably within this sector. In two classes, the E-190 E2 is an 88 seat aircraft and the CS100 is 100 seats. The CS100 also has more range; arguably these are different classes of aircraft.

Thus, we see little impact to Bombardier’s delay from a practical standpoint.

Despite the additional delay, Bombardier hasn’t yet updated its expectations for firm orders and customer numbers. It’s still reporting its goal to have 300 firm orders and 20-30 customers by EIS (previously fall of 2014). Moving the EIS to the right by 9-15 months should implicitly infer higher numbers. Perhaps new targets will be revealed in the program update this week.

12 Comments on “Bombardier CSeries delays have little impact vs competitors”