The area of most interest, of course, is on the CSeries, the all-new aircraft design that pits BBD for the first time directly against Airbus and Boeing and their small A319ceo, A319neo, 737-700 and 737-7.

The CSeries, in its current iteration, was launched in 2008 with an entry-into-service announced for December 2013. With three subsequent delays, EIS is now slated for the second half of 2015 (the CS100, followed by six months by the larger CS300).

Sales have been slower than desired, both by observers and by some within BBD, though executives say they are satisfied with sales to-date: there are 201 firm orders and 445 orders, options and LOIs, from nearly 20 customers. This compares with the announced goal of 300 firm orders and 20-30 customers by the previous EIS of 4Q2014. BBD has not reset the goal following the new 2015 EIS.

During the investors’ day, no “breaking” news was announced; no new orders were revealed and a broad update of the flight test program was discussed.

Sales campaigns revealed last year continue to be pursued: Monarch Airlines of the UK, Air Canada and, more recently, Ethiopian Airlines. A CSeries sales campaign in Russia, where Bombardier has had success for the CSeries and the Q400, may be sidetracked due to the recent events in Ukraine and selective international sanctions against Russia by the West. BBD already acknowledged its Q400 program in Russia has been affected.

CS100 Flight Test Vehicle 3 entered the program just before the investors’ day. FTV 4, the one that will concentrate on engine testing, had “power on” last week and should enter flight testing soon. FTV 5 follows at an unspecified date, with FTV 6 and 7–the CS300 aircraft–coming thereafter.

The following slides, from presentations at the investors’ day, represent some selected overviews of the BBD discussion.

This chart presents in a clear manner how BBD views the competition in the 100-149 seat sector, based on 32 inch seat pitch and standard cabin configurations. Note the positioning of the Embraer E-Jet E2s. BBD also sets the CS300 with three more seats than either the Airbus A319neo or the Boeing 737-7. 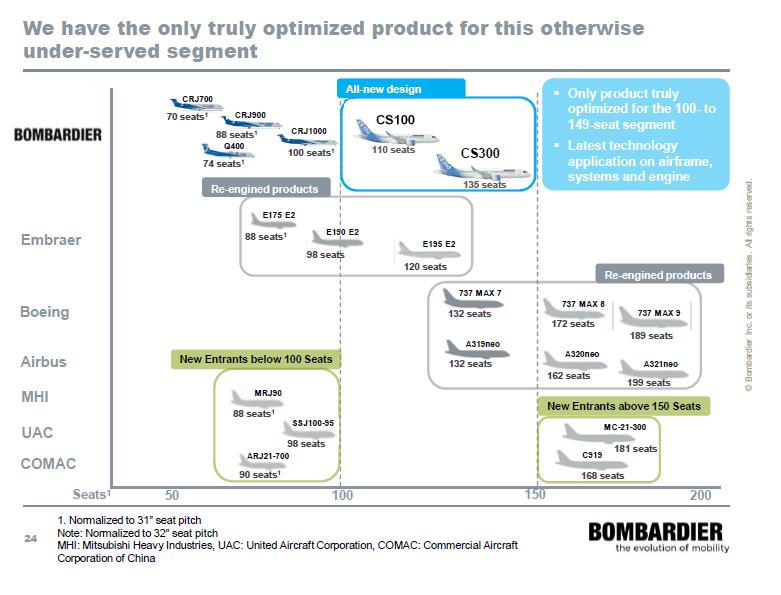 Bombardier’s 20 year forecast for the 100-149 seat sector is 6,900 airplanes; Airbus is closer to 4,300, Boeing is (based on our calculation of data and information) about 5,200 aircraft and the Japan Aircraft Development Corp. is  about 5,100. BBD uses the following illustration to make its case that the US market supports and needs a new entry in the 100-149 seat sector. 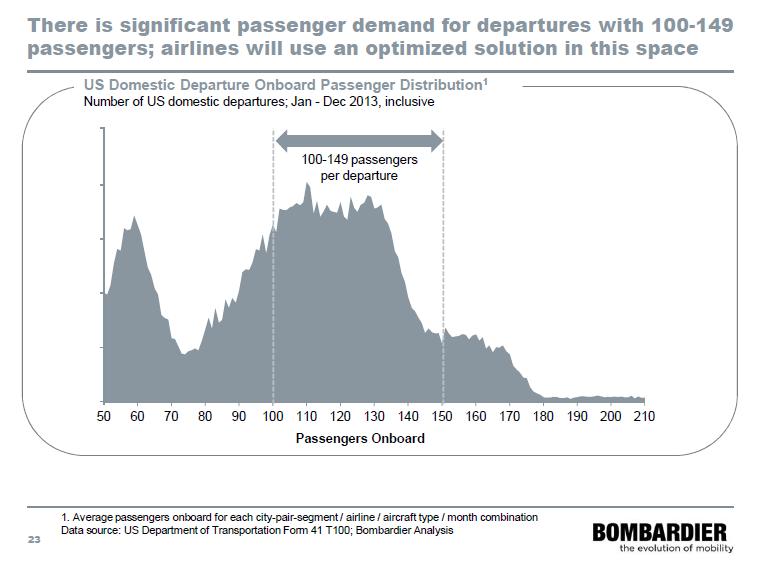 Drilling down on the CSeries flight test program, BBD presented the following chart that broadly outlines the objectives of the test program. 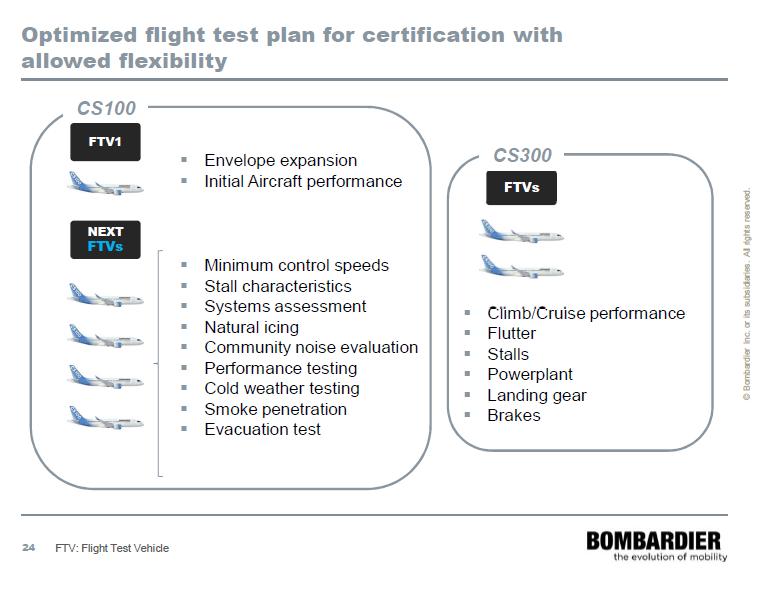 More specifically, BBD detailed the program testing for each of the FTVs. 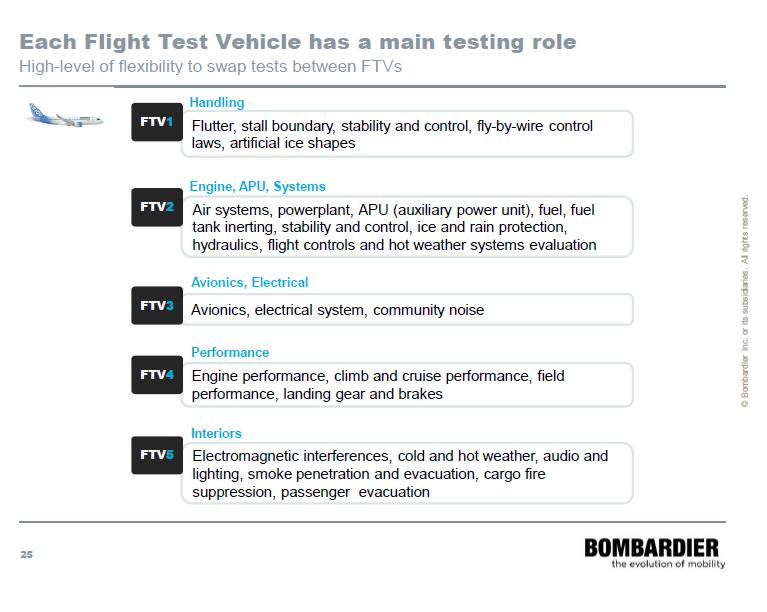 Finally, we selected this chart to include here that shows the timeline for the flight testing program to EIS. 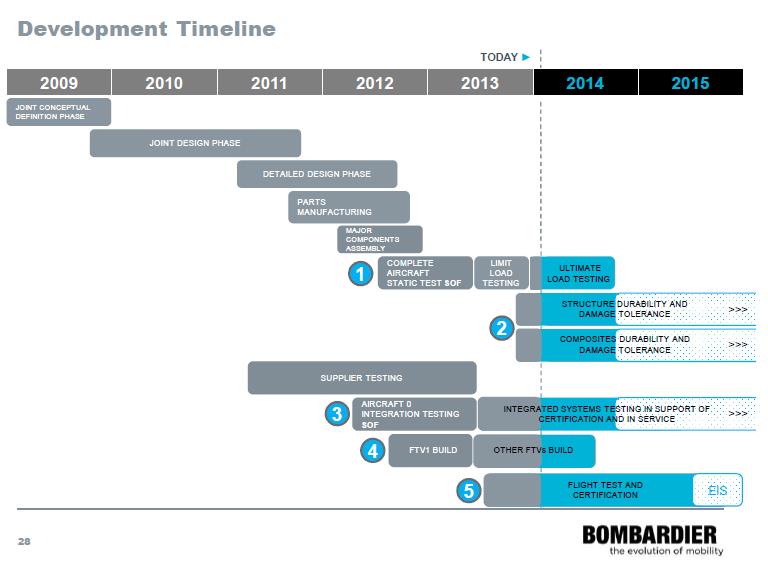 ← Why we think a fire on MH370 is unlikely; 777 has lots of smoke/fire detection to give ample warning; hypoxia theory
Caution on recovering data from MH370 FDR, CVR →