Boeing is on the defensive in the single-aisle market.

The Airbus A320neo family has about a 57% market share against the Boeing d 737 MAX. As recently as Wednesday's third quarter earnings call, Boeing CEO Jim McNerney expressed confidence in market share recovery to parity. We don't see this happening.

The development by Airbus of a 97t "A321neoLR" (Long Range) airplane as a 757 replacement for the long, thin routes of around 3,900nm, although a small market of perhaps 100 airplanes, enhances the A321neo model and could give a boost the the A320neo campaigns.

We had the worldwide exclusive on the development of the A321neoLR Wednesday.

Boeing's image in the single-aisle sector took a big hit at the ISTAT Europe conference last month. About 1,200 people attended the event and in an audience poll, only 23% voted that Boeing has the most competitive narrow body family; 50% voted for Airbus. 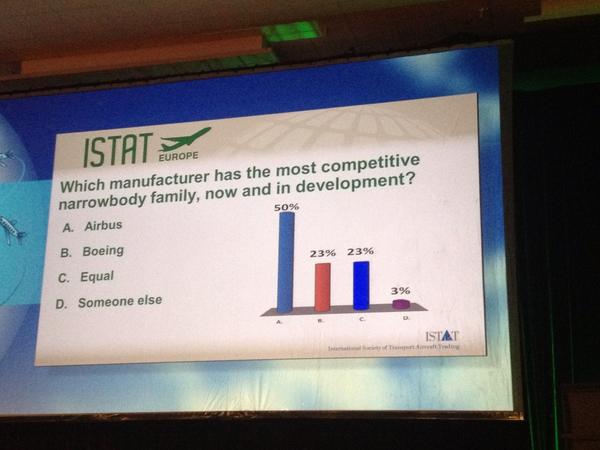 Despite Boeing's public, professed optimism, our Market Intelligence tells us that Boeing is indeed worried about its single aisle market position. And even though the market potential for the A321neoLR is small, there is the knock-on effect to consider. There is demand for a 757 replacement from airlines and in market perception. The same ISTAT Europe conference asked what Boeing should do next; 54% said replace the 757 and another 18% said replace the 737-9, a combined 72% pointing to a need for Boeing to do something with the single-aisle sector.

Photo from the ISTAT Europe conference at Istanbul last month. Photo via Twitter.