March 14, 2016, © Leeham Co.: Airbus is presenting a new edginess in the long-running war of words with Boeing, adopting a tactic Boeing has used for years to make its case.

The European manufacturer has never been shy about getting in its digs at Boeing, but generally Boeing’s messaging—years in the making and steadfastly adhered to—has had more sticking power than Airbus’. 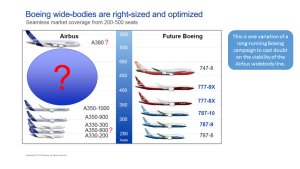 Boeing has frequently showed Power Point slides comparing the widebody products vs. Airbus, with question marks or an X through or next to various Airbus planes, usually the A350 line. Boeing raised questions whether the A350-800 would ever be built. Boeing also raised questions over the viability of the A350-1000, and the product gap between the -1000 and the giant A380. (Figure 1.) 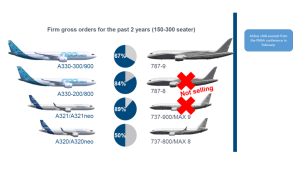 At two conferences this year, the Pacific Northwest Aerospace Alliance (PNAA) and the International Society for Transport Aircraft Traders (ISTAT), Airbus officials struck back. Addressing the Middle of the Market topic, Airbus cast doubts on the 737-9 and 787-8. (Figure 2). 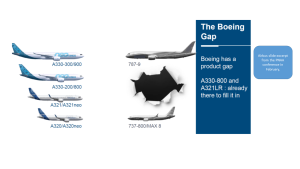 Airbus took the messaging one step further by “disappearing” the two Boeing airplanes, while arguing its A321neo and A330-800 fills the middle of the market, while Boeing, it claims, has the product gap (Figure 3).

Turnabout is fair play, it seems. 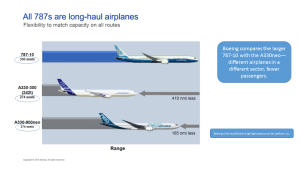 Boeing continues to make a comparison between its airplanes and Airbus in another category. At the same PNAA and ISTAT conferences, an official displayed a slide the compared the 787-10 with the A330-300/900, highlighting more range available with the 787-10. (Figure 4.) The comparison, however, is rather selective. The 787-10 carries 60 more passengers than the A330, according to the Boeing data. 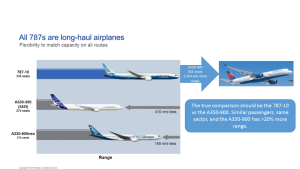 Such is an inconvenient truth.