March 1, 2017, ©. Leeham Co: AirAsia X, the long haul sister of Tony Fernandes’ AirAsia, finally turned a profit during 2016. The airline, which started operation in 2007, had a bumpy ride from the start.

Initial operations were when fuel prices was at the highest, and the aircraft chosen, the Airbus A330-200 and A340-300, weren’t the most economical. 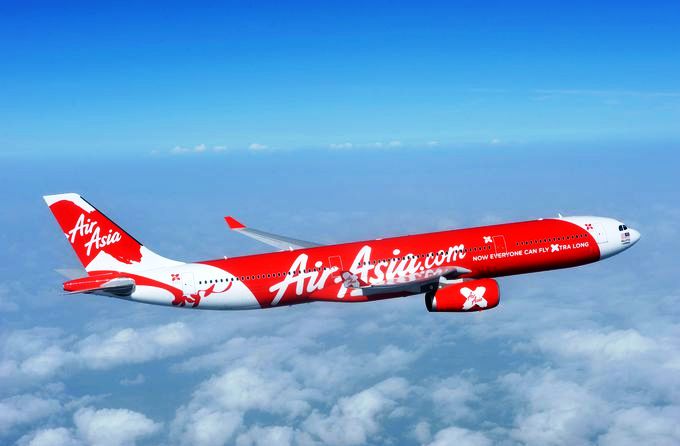 After scaling back operations in 2012 and focusing the fleet on the more economical A330-300, the business gradually turned. The low fuel prices of 2015-2016 finally brought the airline profitability for the last fiscal year.

AirAsia X started in 2007 as a sister company to the AirAsia LCC. Its charter was long-haul LLC. First operations were between Kuala Lumpur and Australia’s Gold Coast. The initial network was a mixture of medium range destinations to Southeast Asia, Australia and faraway destinations like London, Paris and Christchurch, New Zealand.

AirAsia X focused on higher demand destinations in the Southeast Asian realm. As fuel prices declined, losses decreased and the 2016 operation was the first which was profitable on a Fiscal year basis, Figure 2. (to get to US Dollars, divide by three). 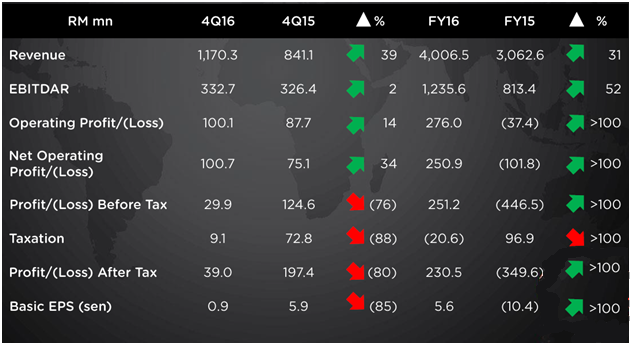 The profits were the results of lower fuel prices, but also of increased demand with a moderated capacity increase. For the first time, load factors climbed close to 80%, Figure 3. This is still a low figure for an LCC operation. 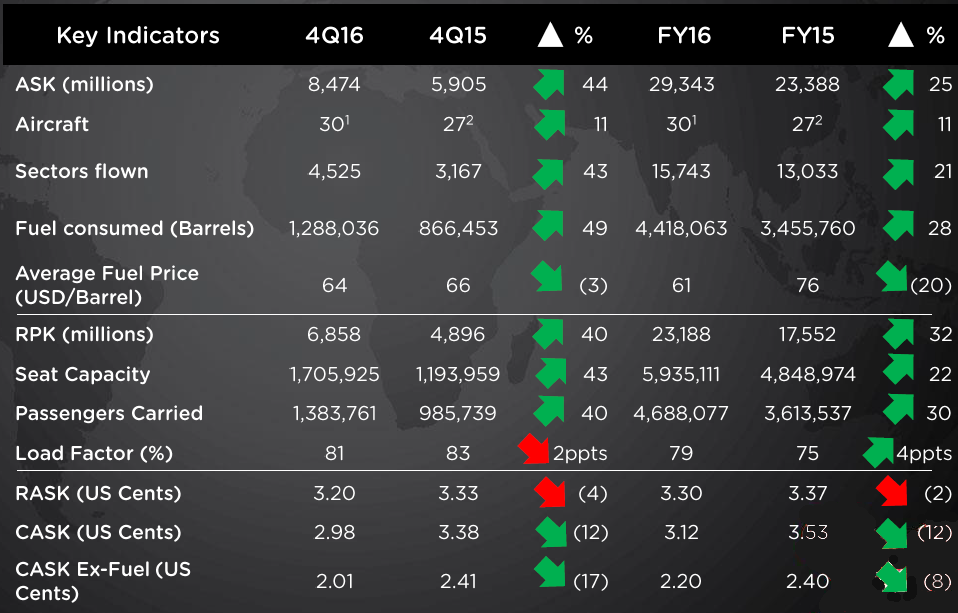 A CASK (Cost per Available Seat Kilometer) ex-fuel of US cents 2.20 is very competitive for an LCC. The RASK (Revenue per Available Seat Kilometer) of US Cents 3.30 is less so. To reach the low CASK, AirAsia X, which operates as an independent airline, shares administrative systems, staffing management and reservation systems with the larger AirAsia.

AirAsia X, like all airlines, is working to increase the ancillary revenues, Figure 4. 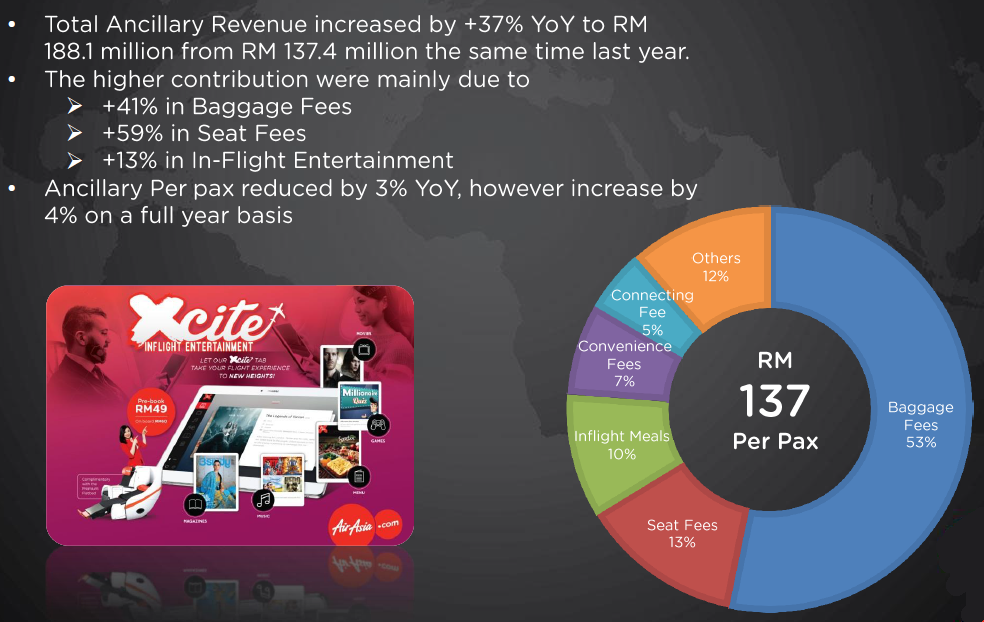 Figure 5 shows the 2016 networks typical long-range destinations. Focus was still on Asian destinations. This was a function of the market and the aircraft which AirAsia X operates, A330-300. It has a practical maximum range of 5,000nm, whereas European destinations are at close to 6,000nm.

With more fuel efficient and longer range aircraft on the way, Figure 6, the time has come to reopen destinations like London/Gatwick, possibly Frankfurt and add Honolulu/Hawaii. 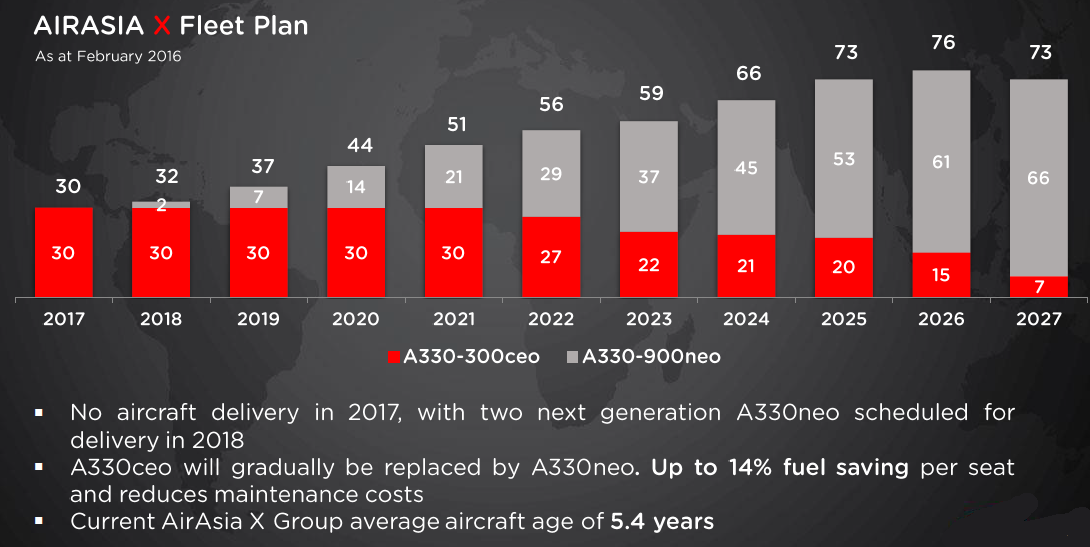 AirAsia X recently announced they will lease three Boeing 777-300ERs to reopen London during 2017. With the A330-900 arriving late 2018, the stopgap became essential. The long-haul LCC market is booming and AirAsia X wanted to put the pin on the chart now.

The long-range destinations which will open with these aircraft during 2017 will be London and Honolulu, Figure 7

AirAsia X has a historical order from 2009 for 10 A350-900. Airbus still lists the order, but there are no signs of AirAsia X taking the aircraft. Should the company want to open destinations on the US West Coast, an aircraft like the A350-900/777-300ER will be needed.

Aircraft acquisitions are a load on the balance sheet, if the aircraft are introduced as own aircraft or with a financial lease. AirAsia X’s balance sheet, Figure 8, is reasonably strong, with equity 24% of sheet balance.

AirAsia X turned the corner after a long struggle to get the long-haul LCC concept to function. The short-haul AisAsia network is an important feed for AirAsia X. The latter is now expanding to cover strategic destinations, as the long-haul LCC market gets going.

40 Comments on “AirAsia X; the long route to profitability”