CSeries economy up to 3% better than advertised

Sept. 19, 2017, © Leeham Co., Montreal: The Bombardier CSeries has proved to be 1% to 3% more fuel efficient in service than advertised, the company revealed last week at its Media Day.

The improvements depend on the mission: 1% on shorter routes and 3% on the longer ones.

Better-than-advertised performance had been rumored, and reported, for months but this is the first time Bombardier confirmed the reports.

It also depends on the model. The CS100, a shrink design, is slightly better than advertised; the CS300—the optimized design—is the better performer. 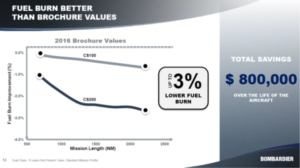 Bombardier’s view of the sector

With Boeing’s redesign of the 737-7 MAX, adding 12 seats and adopting and shrinking the MAX 8 airframe, Bombardier reclassified the 737-7 as a “large single aisle” airplane. 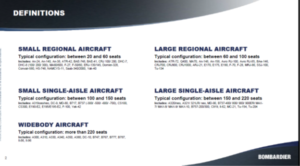 The reclassification happens to also takes away the comparison between the CS300 and the 7 MAX, at least in BBD’s view—an important distinction in the current trade dispute between Bombardier and Boeing before the US International Trade Commission and Department of Commerce.

Now, with the revised 7 MAX carrying 138 passengers to the CS300’s 130, Bombardier suggests the two airplanes no longer may be compared. 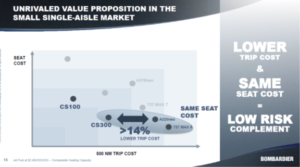 Bombardier claims the same seat-mile cost for the CS300 as the Airbus A320neo and a significantly lower trip cost. It’s presentation at the Media Day suggests a lower seat-mile and trip cost than the new 7 MAX design. (LNC’s analysis preliminarily suggests similar seat costs to each other but the CS300 has a lower trip cost.)

219 Comments on “CSeries economy up to 3% better than advertised”