March 25, 2022, ©. Leeham News: Last week, we looked at the energy density by mass and volume for hydrogen and regular Jet fuel (Kerosene), Figure 1.

With this information, we now look at how these fuels can be stored in an aircraft. 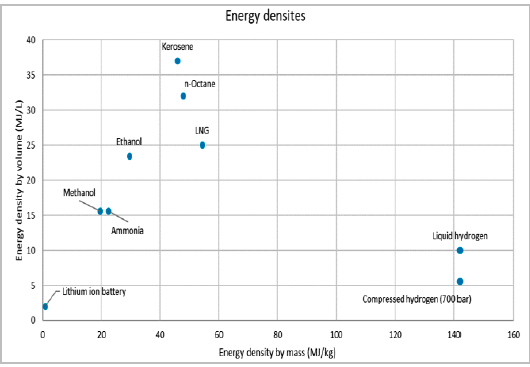 Storage of Jet fuel/SAF in an aircraft

The storage of today’s Jet fuel and the “drop-in” SAF (Sustainable Aviation Fuel, either biomass or Synfuel based, see Part 11) is almost “for free” in today’s aircraft, Figure 2. 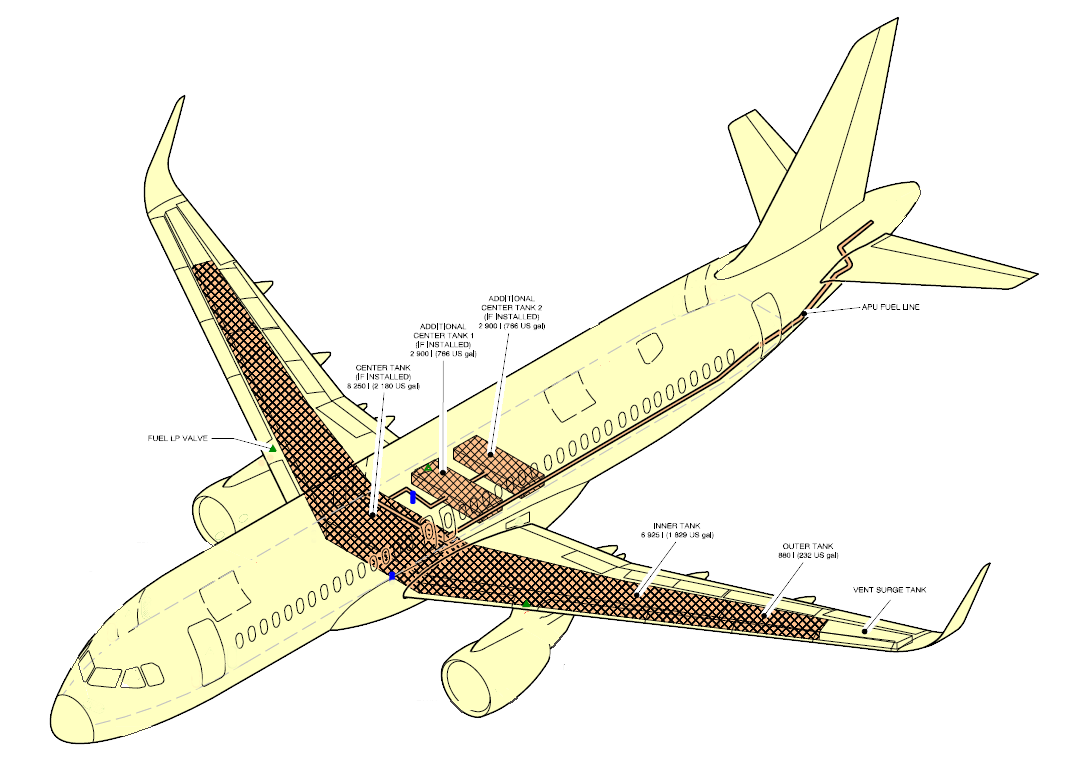 Figure 2. The fuel tank system in an Airbus A320. Source Airbus.

The fuel is stored in the wing’s winbox, which forms a natural tank with its forward and rear spars and wingcovers top and bottom that closes the box. The ribs in the wingboxes keep the wingcovers and spars in place but also function as compartment- and end walls for the fuel.

The center wingbox is not used for fuel unless needed, as it stores fuel away from the aerodynamic lift of the wings and, therefore, increases the wing root bending moments.

In Figure 2, extra center tanks in the rear cargo hold are shown. These are used for extra long-range aircraft variants (more common for the A321 than A320) and are proper tanks with their own structure to hold the fuel.

The additional mass spent in the aircraft for its fuel is the sealing compound for the wingbox tanks, fuel pumps, tubes and valves, and any extra equipment such as the oxygen depletion system to make the tank air above the fuel non-explosive.

The typical mass for such a fuel system for a single-aisle airliner is around 500kg.

The storage of hydrogen is trickier than Jet fuel. You can’t use a compartment formed by the aircraft structure like for Jet fuel.

For hydrogen, there are two choices, gaseous storage or liquid storage.

As gas storage of hydrogen at normal pressure and temperature would need 3000 times the space of Jet fuel for the same energy content. Thus, a gas alternative stores the hydrogen under high pressure to compress the volume.

The aviation sector has adopted the car and truck industry’s 700bar/70MPa/10,000PSI compressed hydrogen storage method. The gas tanks are made of a leakproof polymer liner and a carbon fiber shell, figure 3. 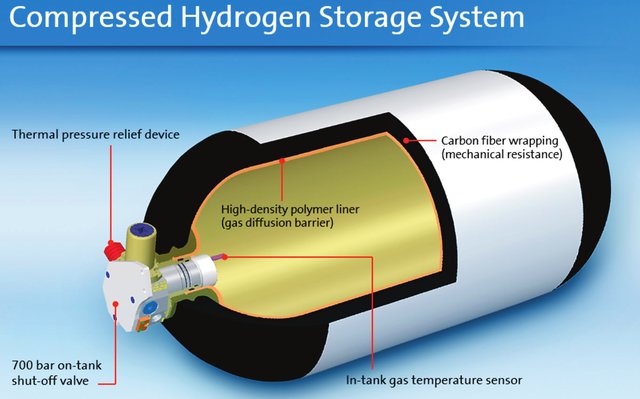 If we store this in a 700 bar tank, the tank with hydrogen weighs 26,700kg. This mass is impossible to handle, and a volume six times the jet fuel is problematic. It’s why gaseous hydrogen is used for demonstrators (due to the convenience) and extreme short-haul projects (island hopping etc.).

The alternative is liquid hydrogen storage. Now the hydrogen is stored at its liquid phase temperature of -253°C in tanks with a pressure of around 1.2 bars, Figure 4. 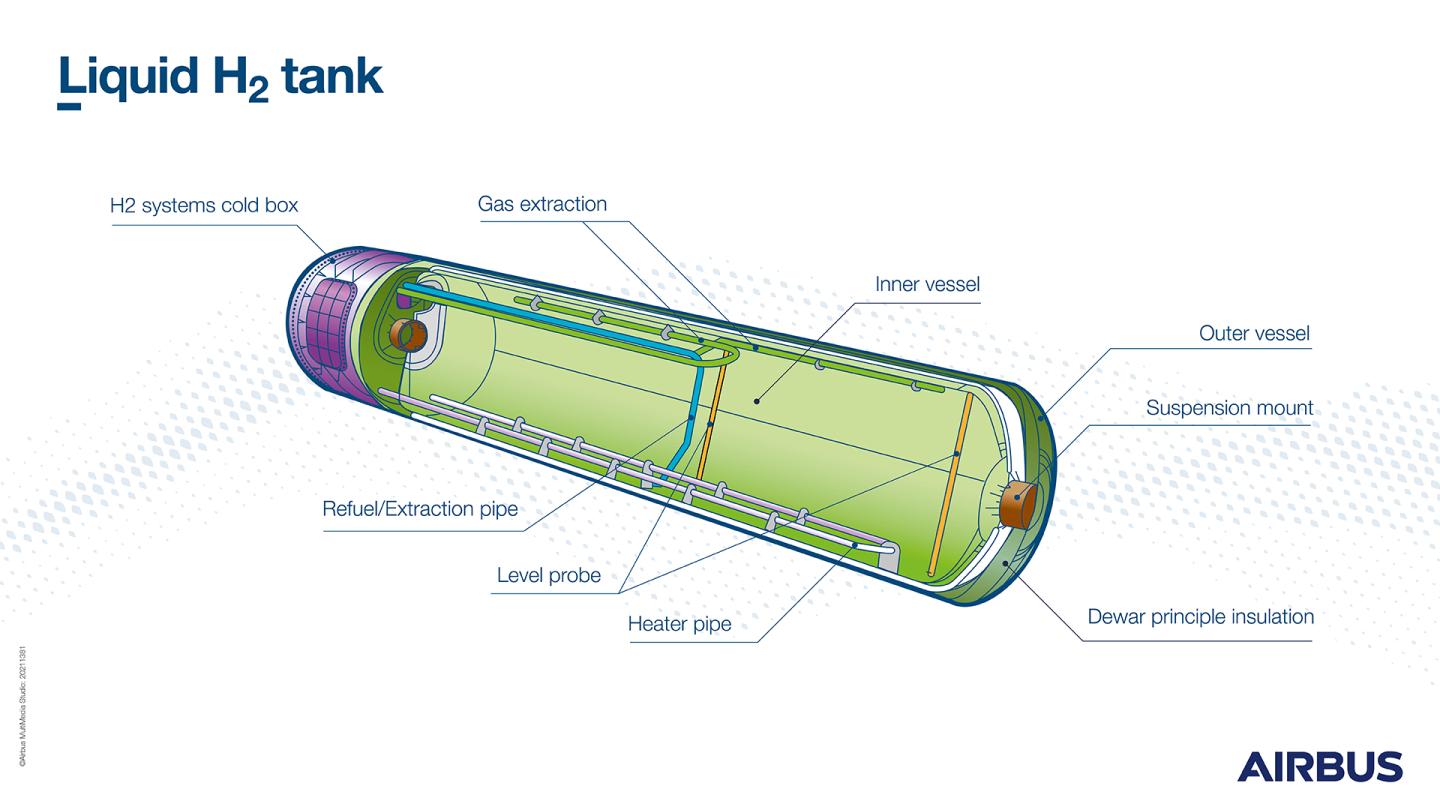 The advantage of this storage method is an acceptable mass. To store the energy of our 4,600kg of Jet fuel, we need 1,600kg of LH2, and the tank with LH2 would weigh 4,600kg, the same as our Jet fuel. We have then assumed a Mass Fraction of 35%, which is the projected fraction for tanks of this size.

The drawback is an LH2 volume that is four times larger than the Jet fuel volume, and it must be stored in a minimum external surface tank like in Figure 4 to minimize heat influx through the tank walls (these use vacum flask and polyurethane insulation to minimize heat influx to the LH2). It means more aircraft mass as the LH2 can’t be stored “for free” in the wings like Jet fuel.

Another drawback is LH2 boil-off as the tank content can’t be 100% isolated from the surrounding atmosphere. This makes LH2 tanks a short-term storage method.

The debate about gaseous or liquid storage of hydrogen in airliners is a pseudo-debate. The only viable storage form for projects outside extreme short-haul is liquid hydrogen. Gaseous storage’s weight and volume consequences are unacceptable for any airliner use, regional or mainline.

We explore the aircraft-level consequences of LH2 as fuel for airliners in coming articles.

← A Boeing 787 freighter, which model and how good? Part 2
Pontifications: Horizon’s plan to focus on single fleet type appears a blow to TPNG hopes →