The announcement last week that AirBerlin canceled orders for 15 Boeing 787s gives Boeing an unexpected, big advantage in the contest for a big wide-body order from Delta Air Lines–depending on when Delta wants the airplanes.

The competition apparently has been narrowed to the Airbus A350-900 and the Boeing 787-9, according to Flight Global. Based on this article, the Airbus A330-900 neo has been eliminated, which if true is a blow to the fledgling program in which Airbus had counted on Delta to be a launch customer.

Outside of the OEMs and Delta, it’s not known when Delta wants 50 widebodies. But the A350 and 787 are essentially sold out through the end of the decade, though both OEMs can typically find delivery slots for important campaigns such as this one by over-booking or persuading other customers to move their delivery positions.

Airbus has plenty of slots for the A330neo from 4Q2017, when entry-into-service is planned. But with the apparent elimination of the A330neo from the competition, delivery schedule becomes important–and the AirBerlin cancellation works to Boeing’s advantage. 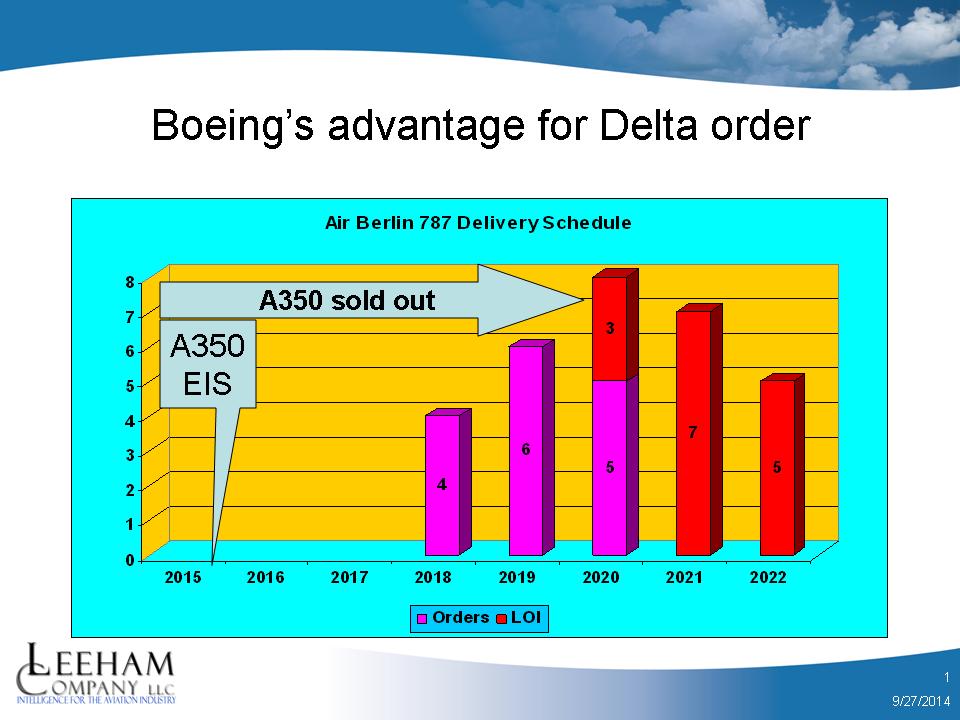 The cancellation by AirBerlin of its order for 15 787s potentially gives Boeing an advantage in the competition for a wide-body order from Delta Air Lines. Note: the arrow for A350 EIS should point to 4Q2014, not 4Q2015. Source: Ascend data base.

The Ascend data base shows AirBerlin’s deliveries were to begin in 2018, the year the A330neo probably was available for Delta, following 121 commitments placed at the Farnborough Air Show by other customers–plus letters of intent for 15 more. AirBerlin’s cancellation provides Boeing with delivery slots without having to double book or persuade others to give up or defer slots.

Another factor: the 787-9 is powered by either the GE Aviation GEnx or Rolls-Royce Trent 1000 engine; the A350 is powered by the RR Trent XWB. Delta is a big GE/CFM engine user, and GE is very aggressive in providing and rewriting future and current engine maintenance agreements. RR is notoriously stingy on its agreements. Delta Tech Ops likes doing its own maintenance and GE/CFM appears more willing to grant this than RR.

Delta is expected to make a decision by the end of the year.

When the A330neo was in the mix, and absent delivery slots for the A350 and 787, we thought Airbus had the advantage. Now we believe this has tipped toward Boeing.

← Assessing the wide-body and narrow-body freighters
A350 certified; we provide a comprehensive program review →