Bregier started with pointing out that 2014 was a very eventful year for Airbus. Airbus did their customary end of year sprint and passed Boeing for net orders with 24 aircraft netting 1456 commands, Figure 1. 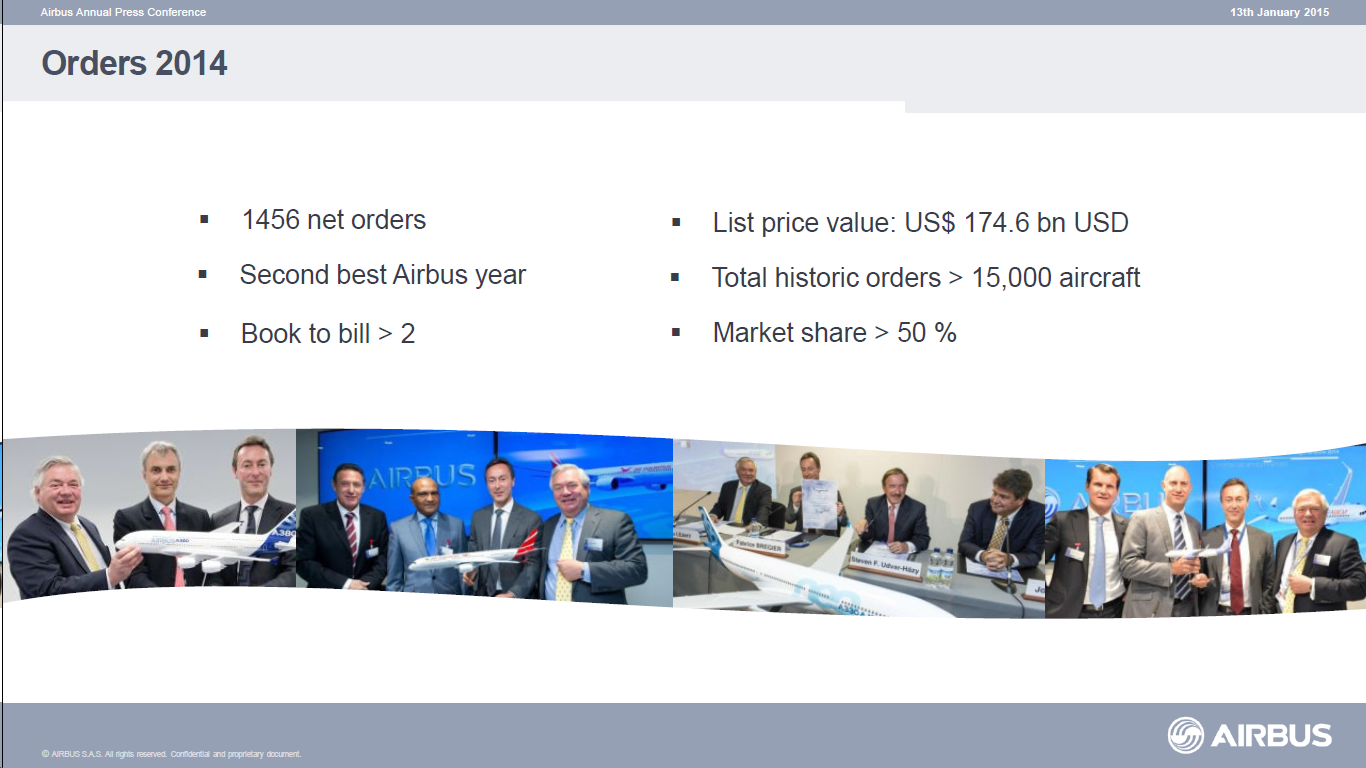 On the delivery side Boeing is ahead with 723 deliveries versus Airbus 629, Figure 2. 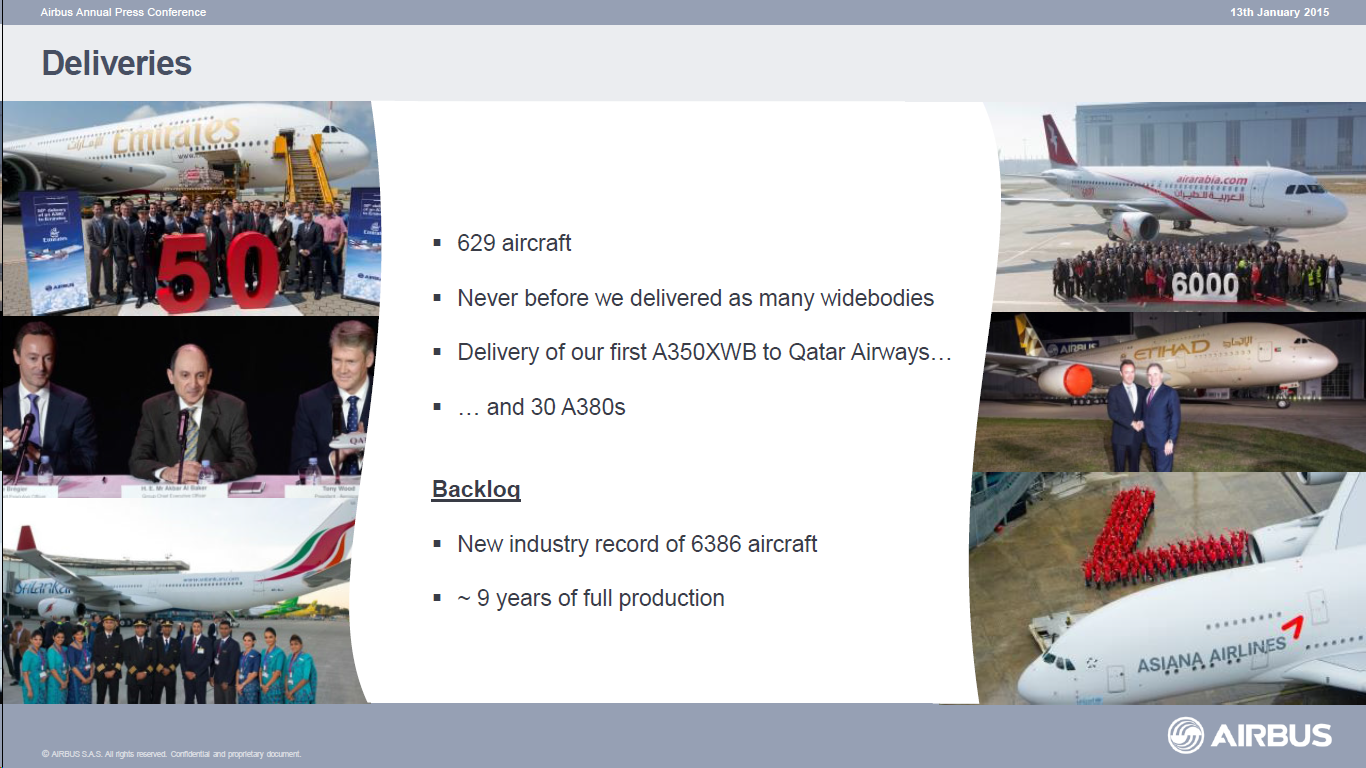 Further Airbus certified the A350 and delivered the first aircraft to its launch customer, Qatar Airways. It also launched the A330neo and got 120 orders during the year. Finally they flew the A320neo first prototype.

Bregier then said 2015 will be more about execution; getting the production ramp up of A350 running smoothly, producing 15 aircraft and leaving the year with rate 5 at the Final Assembly Line (FAL) level.

2015 is also the year of certification for the A320neo and then first delivery, expecting to happen in Q3 and Q4 2015 respectively. Finally it is the year of break even on production cost versus net price for the A380, where “we are on track to achieve that” according to Bregier.

John Leahy continued with presenting slides around the sales race over the years with Boeing. Overall he said they are dividing the market pretty evenly between them. Airbus has slight lead in narrowbodys (5-10% depending on year and time of year) even when you even out the 6 months head start according to Leahy. In Widebody Boeing has a lead in the last years but if one compares the average from all years from the launch of the A350 widebody sales are just about even, Figure 3. 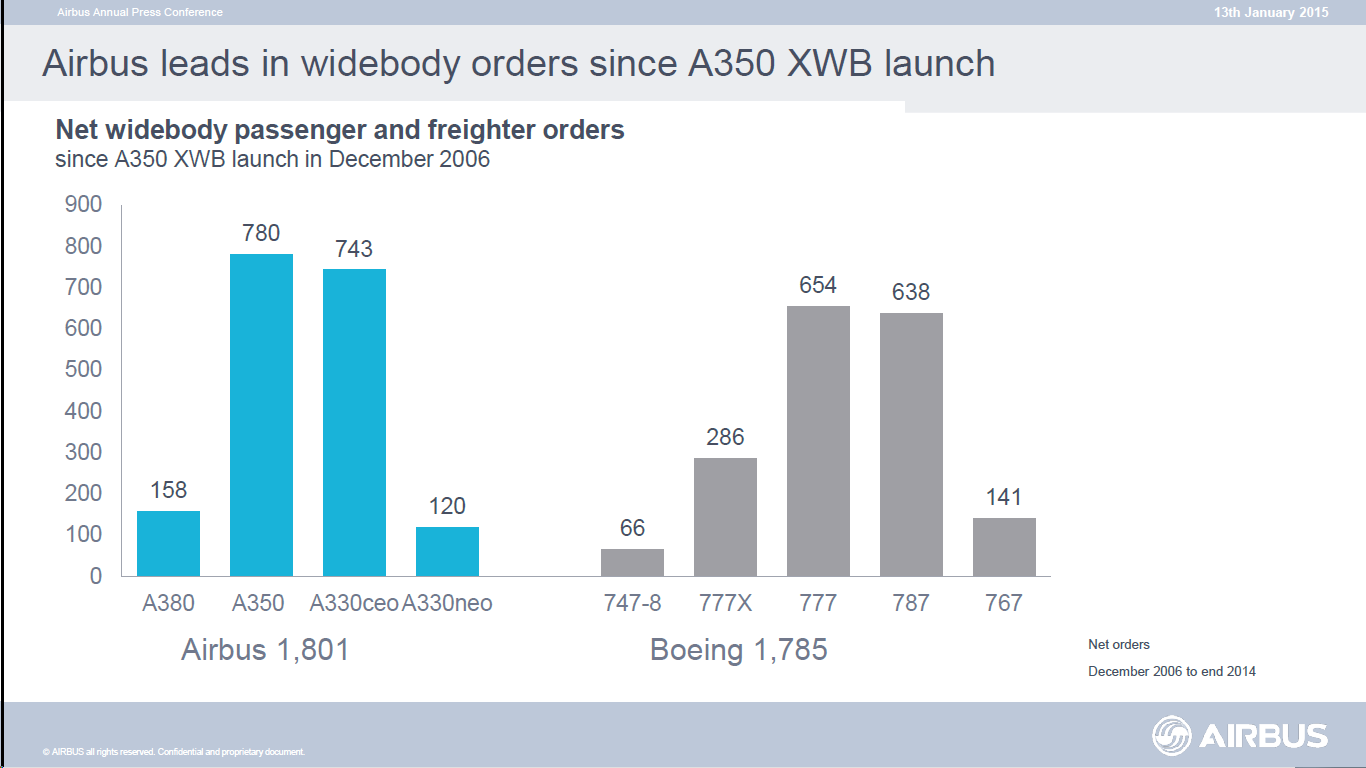 Choosing the 350 launch as a comparison time period cuts off 180 Boeing 787 orders, so the comparison has its weaknesses but overall the Narrowbody and Widebody aircraft markets are pretty evenly divided between the two with fluctuations between years.

Leahy then formally launched the A320neoLR with the official name “A321LR” announcing Steven Udvar-Házys ALC as the launch customer. We will take a closer look at the final figures for A321LR in a follow up article.

Leahy then spend the majority of time on the A380 arguing why the market will come to this aircraft. The reason is that air traffic grows with Gross Domestic Product, GDP, but airports and airport slots do not. Over the next 15 years the number of airports which will be slot constrained will more than double and these airports that are already have substantial A380 traffic, Figure 4. 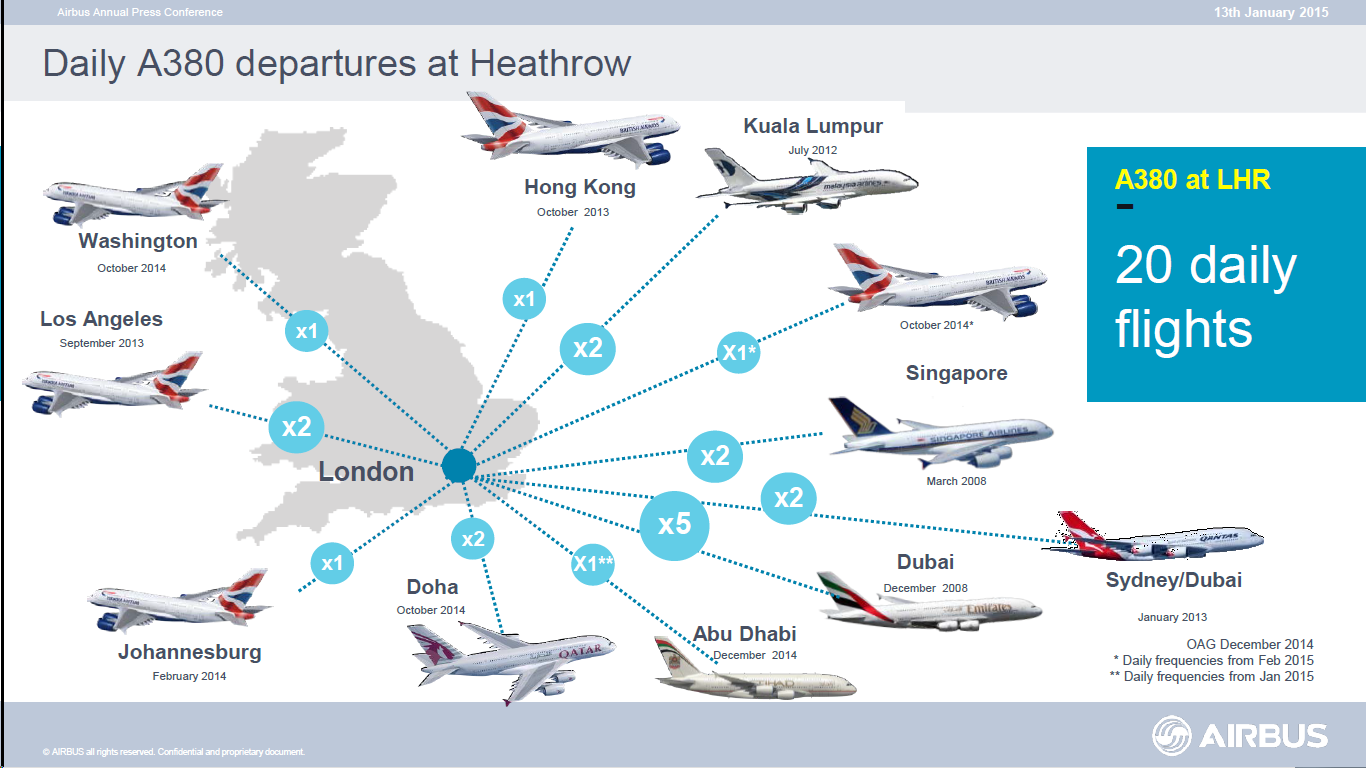 The future of the A380 is therefore secured, Leahy said. He was supported by Bregier in the QA session where a strong support for future developments of A380 was given, though without specifics. “After some difficult years A380 is now on track product wise and economically, it then becomes an aircraft program like any other and the point in time for any incremental improvements will be decided on a running basis”.

There Leahy also got the question how fuel costs, which are almost 100% lower than a year ago, will affect sales. He said “if it has any effect it is that airlines have more cash on hand to place the initial deposits”; arguing that aircraft orders are made with a planning horizon of 10-15 years and therefore would not be materially affected but a short term fluctuation of fuel prices.

Overall the mood of Airbus management was one of quiet confidence. The only area not 100% in order or under control was the effects the failed Global Investor forum has had of the image of the A380. Our deep analysis has shown this to be more general sentiment and hesitation of the market to fill such a large aircraft rather than any deficiencies in the aircraft’s underlying economics. We believe therefore one should add changing the markets perception around the A380 to the task at hand for Airbus 2015.