Boeing 757 MAX: why its operating economics does not work

Feb 12, 2015: In a series of articles during the autumn we covered the replacement scenarios for Boeing’s 757-200 when used for long haul passenger operations. The series also included an interview with Boeing’s head of new airplane studies, Kourosh Hadi, director of product development at Boeing where he outlined what Boeing studied and why.

This week The Wall Street Journal published an article portraying that Boeing seriously considered launching a re-engined 757 as a response to Airbus A321LR. Boeing has since vehemently denied the story and we have given the reasons why it does not make sense for Boeing.

As a complement we show the operational economical analysis that we did at the time of our 757 articles, now updated to the exact modifications suggested by The WSJ, a new engine and new winglets paired with modern avionics.

One of the reasons we did not include an updated 757 in our article series was its peculiar engine need. It is one of the few modern airliners that asks for engines in the 40 klbf thrust class. At the time of 757 development Pratt & Whitney (PW) bet on the 757 as the heir to Boeing’s 737 for short and medium haul, consequently they developed an engine, PW2000, especially for this aircraft type. Rolls-Royce conceived a derivative of its larger RB211-524 to cover this thrust class, RB211-535.

The situation is the same today, any re-engine of the 757 would require a new engine development. The closest modern engine would be the PW1133G or LEAP-1A which is used on Airbus A321neo and LR. PW has already talked about higher thrust versions of the base PW1100G. To stretch it to 40klbf is not possible however without major changes. Classical “throttle push” stretch i.e. spinning the engine faster by virtue of injecting more fuel into a further developed hot section is only possible to something like an additional 10% of thrust. This would take us to 36klbf, a far cry from the 43 klbf needed for a direct replacement of the most popular engine on the 757, the RB211-535.

In practive one would need even more, modern engines are heavier and their higher by-pass ratios gives them a larger “LAPSE” i.e. they lose more power due to forward speed. The critical phase on takeoff where the ultimate thrust for a 757 MAX is needed is at the safety speed V2 of 155 kts with one engine inoperative. This is where the max thrust of the engines are needed, not for normal takeoffs. So we definitely talk about a new development for a 757 engine should a 757 MAX be realized. The reasons why such an engine development is unlikely is given in our article “Here’s why Boeing won’t do a “757 MAX”.

To compare the performance of a 757-200 classic and a MAX variant against its main rival, Airbus A321LR, we need an apples to apples yard stick. As these aircraft are of different size we need to compare all critical values per transported passenger. Boeing and Airbus use different standards for how they configure cabins, therefore one cannot use their seat numbers for such comparisons. We therefore did equally configured cabins for the article series, based on United’s configuration of their 757-200W used for long haul. As can be seen in Figure 1 this is representative or how the airlines configure 757 for long haul.

Figure 2 shows how United has split the seating inside the 757-200. They use the extended pitch needed for the overwing exits to double as extra legroom for the final rows of the Premium economy section. This is typical for how Premium economy is configured with aircraft using such safety exit configurations. 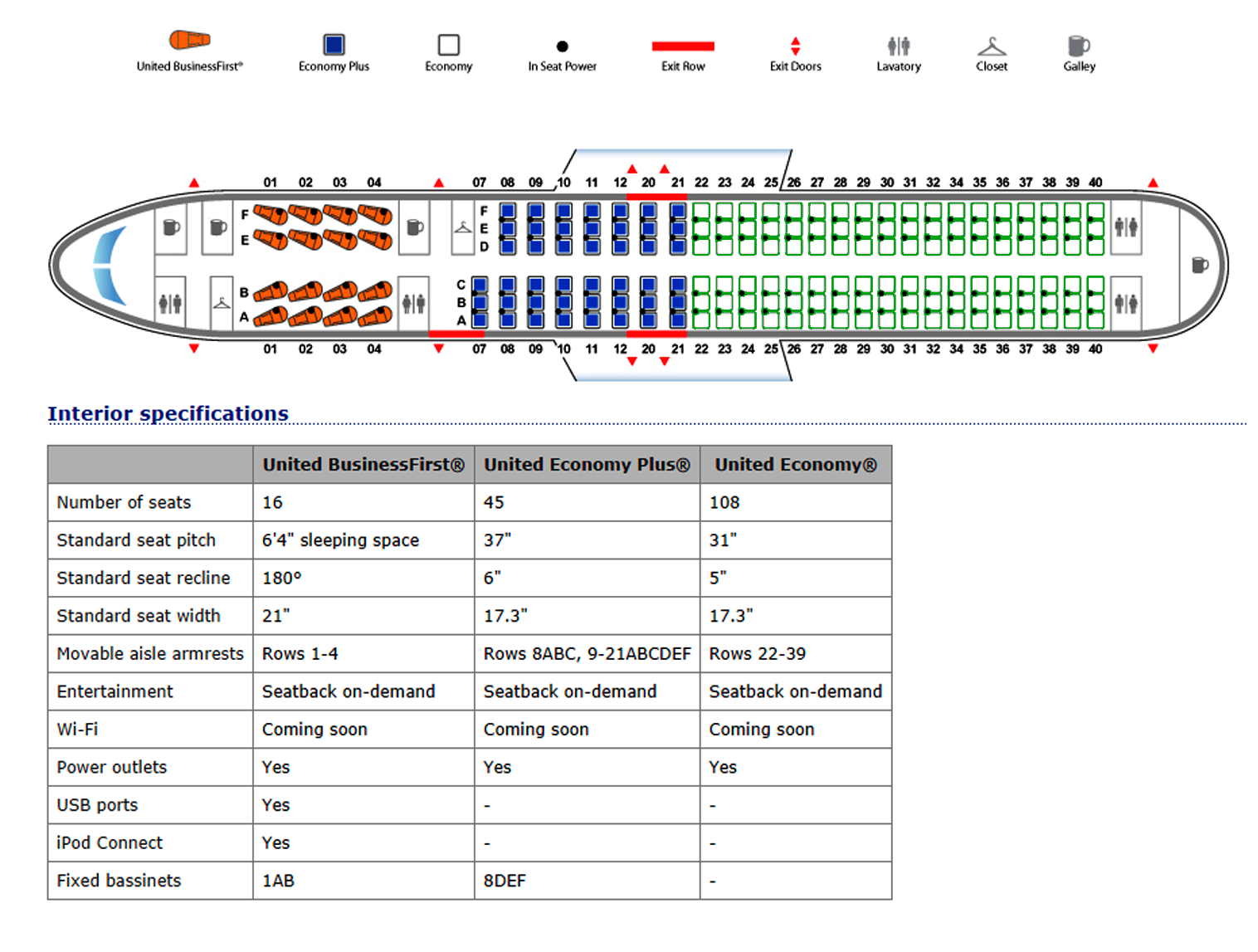 The cabin for our A321neoLR is show in Figure 3. It turned out to be very close to the cabins Airbus had been using in their studies of the A321LR.

With these equalized cabins we can compare the A321LR, 757-200 classic and a 757 MAX with new engines and wingtips of the Boeing split winglet type, Figure 4. 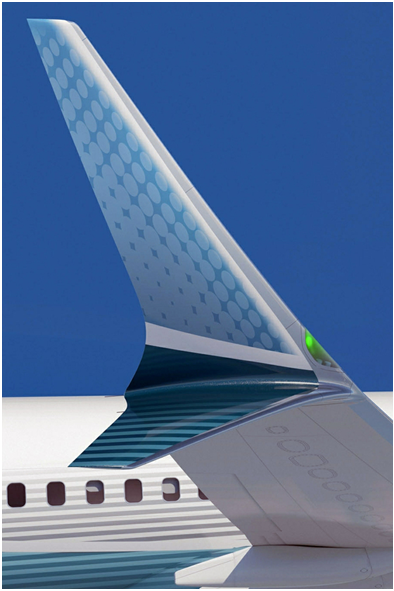 As described we assume state of the art engines which could be available 2021. We base the performance of these engines on the technology level of GE’s GE9X, suitably adapted to a 40klbf thrust class (performance don’t scale downwards linearly as compressor and turbine tip clearances don’t scale 100%). This is the most efficient engine in development today with pressure ratios of 60:1 and a high by-pass ratio.

As an example PW’s P1100G and CFM’s LEAP-1A trails this generation of engines with around 5% in efficiency as their cores are only working with pressure ratios of 50:1. The higher by pass ratio of e.g. a geared architecture cannot compensate such a large difference in thermal efficiency when one compare on the airframe efficiency level, where the extra weight and drag of a larger nacelle is taken into account.

Despite putting on the most efficient engines possible and the latest winglets in our propriatory airplane model, a 757 MAX would trail the A321LR with more than 5% on a per seat basis and with 9% on a per trip basis, Figure 5. 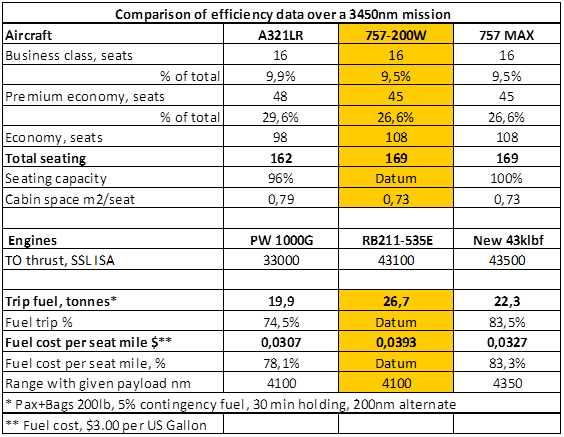 Why is clear to us, the large 757 wing increases the wetted area to much and the lower aspect ratio gives a to high induced drag, Figure 6 and 7. For any new 757 MAX a new wing with higher aspect ratio would be needed and a fuselage with the cross section of a 737 is just not worth it, notwithstanding production and tooling issues described in our other article. 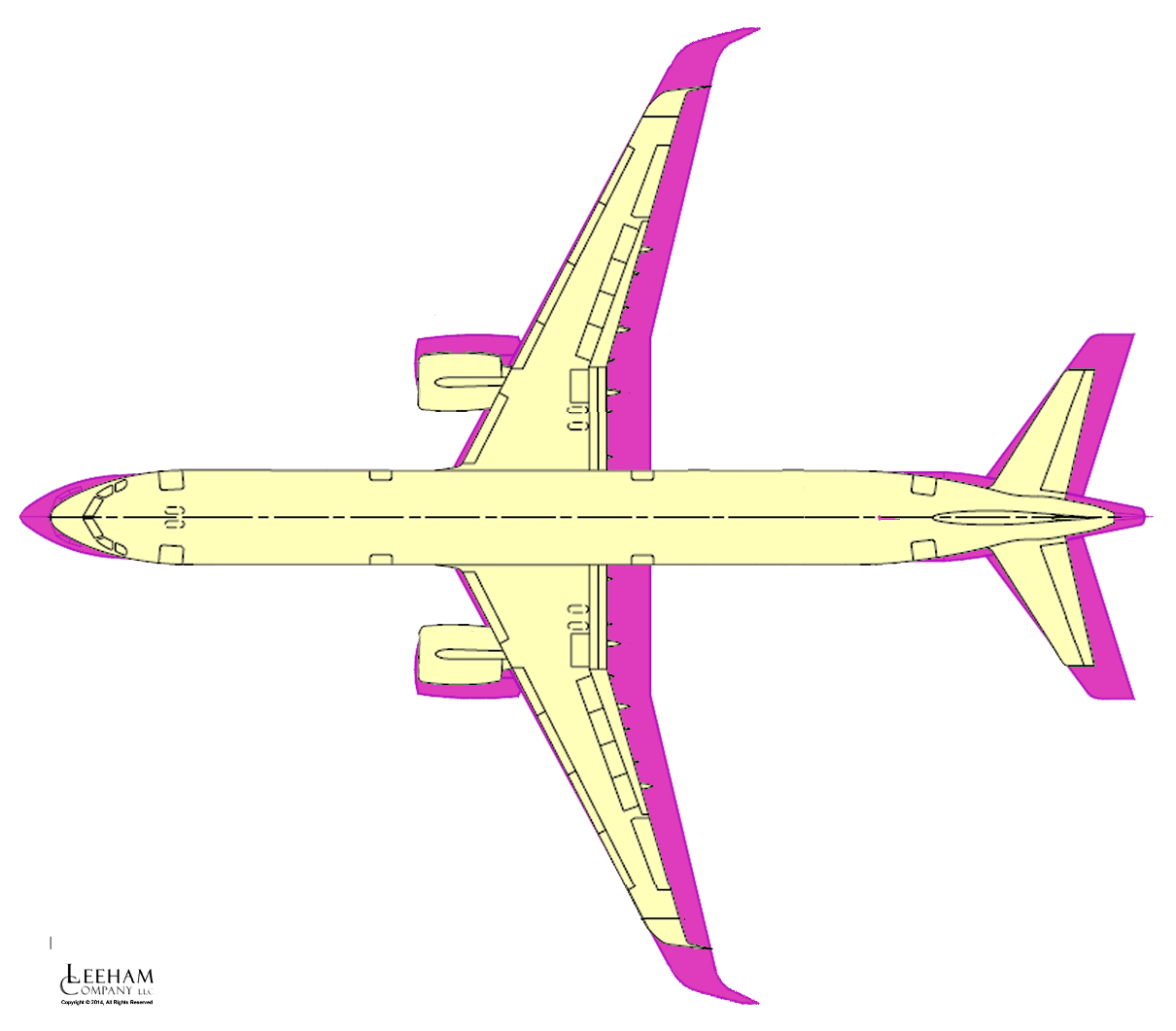 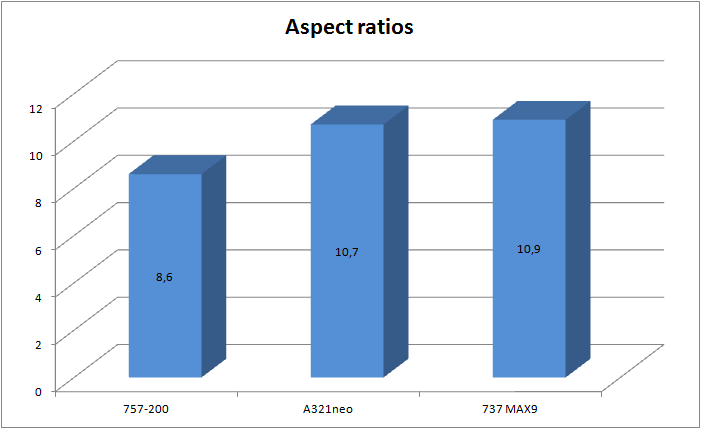 With our modeling capability being very close to the tools that the OEMs use for preliminary design studies we can check how different aircraft configurations, present or future, pan out. It was clear when we did our original article series that a 757 replacement would have to be a more modern design. We also described the work Boeing was doing seeking solutions where a new or incremental development investment would make sense. It would not be a 757 MAX.

32 Comments on “Boeing 757 MAX: why its operating economics does not work”