Tim Clark, president and COO of Emirates, is adamant there is no linkage between the prospect of an A380neo and the medium twin-aisle order. Clark, of course, is the strongest advocate for re-engining the A380. Qatar Airways CEO Akbar Al-Baker said if the A380neo is launched, he’ll order some. Lufthansa Airlines said Airbus has to do the neo if it’s to regain the lead in seat mile costs over Airbus’ own A350-1000 and the forthcoming Boeing 777-9.

These are the only public declarations of interest I’ve seen.

Airbus might have gained some advantage with the expected launch of the A350-900LR, which adds about 600nm to the range of the airplane at the expense of some passenger seats. The range is now computed to be about 8,500nm. The 787-10 now has a range of less than 6,500nm under Boeing’s new Standard Rule data.

Boeing continues to comfortably lead in the wide-body backlog. 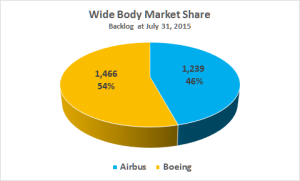 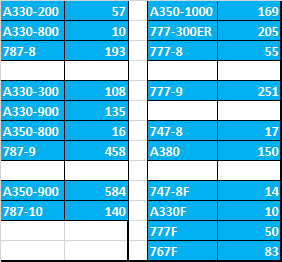 The aircraft are grouped by seating capacity to best show how the aircraft stack up against each other.  Airbus does not have a competing offering to the Boeing 777-9.

Figure 2 indicates the bragging rights at stake for the Dubai Air Show.

The aerospace world will be watching.