Pontifications: 50% of something or 100% of nothing: something to consider at Bombardier

Oct. 19, 2015, © Leeham Co. Bombardier is dominating the aerospace news lately, given the reports of talks with Airbus about selling a stake of the CSeries program to the European company; a report that it planned to approach Embraer for a business tie-up; and on Friday, a long analysis by Reuters about BBD’s financial challenges.

Last week I chronicled Bombardier’s history predicament of how it got to where it is today, a very deep hole that the new management—which only got on the scene last February and which has spent much of the year reorganizing the company and hiring a new team—has to dig out of. It’s not an easy task and it won’t come overnight.

Let’s take yet another look at things, given the continued headlines last week.

Tying up with competitors 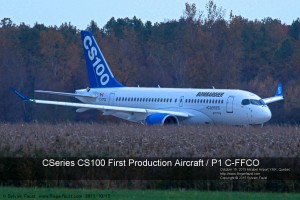 Photo via Sylvain Faust, Click on image to enlarge.

The talks with Airbus were a long-shot to success. I don’t have any sense as to how serious or how far advanced the talks were, or whether they were just exploratory. I certainly could make a case that the CSeries could fill a hole in the Airbus line: the A319neo clearly isn’t going anywhere and I’m not at all sure the airplane will ever be built in anything but the ACJ. The same is true for Boeing and the 737-7; I doubt the airplane will ever be built.

There is no indication so far that BBD and Boeing have had any talks, but Boeing being Boeing, I would not be at all surprised if the company hasn’t at least looked at the prospect of buying into the CSeries.

Then there was the report BBD was going to approach Embraer about a tie up.

EMB was quick to issue a statement:

“Embraer has not been approached by Bombardier regarding a partnership on the C-Series and remains fully committed to the development of its E-Jets E2 family of aircraft, estimated at US$ 1.7 billion and which EIS of the first model (E190-E2) is planned for the 1H 2018,” a spokesman said last week.

One word assessment of tie-ups

But with all the speculation over any business arrangement between BBD and its competitors, there is a one-word answer that more than likely kills any prospect:

There’s more overlap with Embraer than with Airbus or Boeing, in my view. The E-190/195 remains an active program with which the CS100 competes. While the CS300 competes with the A319neo and 737-7, the likelihood (as I see it) these models won’t be built, or will have such a miniscule market share, is so great as to enable an argument that anti-trust concerns are less with Airbus and Boeing than with Embraer.

But that doesn’t mean these wouldn’t exist. Regulators would look at the prospect of the 160-seat, high density CS300, which lands squarely in the lower end of the A320/737-8 territory (if similarly configured) and the prospect of the oft-talked about CS500 and raise concerns.

Airbus is concerned about an emerging competitor who will creep up from the 100-149 seat sector and hasn’t been shy about saying so publicly, so regulator concerns already have this as a basis from which to proceed.

At least with McDonnell Douglas, Boeing got a then-decent defense business to make it worthwhile for the pain and agony of clearing regulator approval of anti-trust issues. There is no such “greater good” in a CSeries tie-up.

The Reuters article pinpoints a problem that has to be addressed: the continued control of the Beaudoin family. As LNC reported some time ago, Canadian investment analysts pointed to this issue as one stopping some investors from pursuing a minority stake in the Transportation (rail) unit IPO that is needed to raise cash.

The Beaudoins have to decide whether their ego and pride is worth more than the benefit to the company, shareholders, employees and customers. They currently have 54% voting control. They need to give this up to a minority position.

There’s a saying in the US that’s quite apt: Having 50% of something is better than 100% of nothing.

The Beaudoins need to take this saying to heart.

55 Comments on “Pontifications: 50% of something or 100% of nothing: something to consider at Bombardier”