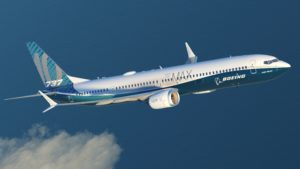 This is always the multi-billion-dollar question for any aircraft and engine manufacturer.

For Boeing, launching the 737-10 is a low-risk, and in the eyes of many, futile effort to stem the bleeding of market share between the MAX 9 and its rival, the Airbus A321neo.

Depending on who’s counting and how the numbers are calculated, the A321 sales outpace the MAX 9 by a factor of four or five to one. LNC calculated last year that the ratio is more likely 3:1, identical to the market share split between the predecessor airplanes, the 737-900ER and the A321ceo.

Boeing chose the low risk approach with the MAX 10 that VP Marketing Randy Tinseth unveiled Monday at the annual meeting of ISTAT in San Diego.

The airplane is a simple stretch, adding fuselage plugs fore and aft of the wing to bring capacity to 230 passengers in high density, one-class configuration, 10 fewer than the A321neo. Although the interior dimensions about almost identical, the 737-10 maxes out on exit limits before the Airbus does, and the A321’s rear fuselage tapers differently than the 737’s.

Boeing is immersed in several development programs: the MAX, the 787-10, the 777X and the KC-46A. CEO Dennis Muilenburg s adamant that research and development spending will remain constant over the next several years, as shareholder value takes priority.

Accordingly, plans for major modifications to the 737, which would have put it on an equal footing with the A321neo’s most capable model, the LR (long range), were nixed—as were desires from Boeing’s own product development unit for an entirely new airplane.

Tinseth claims the 737-10 has more range than the A321neo. Predictably, Airbus COO-Customers John Leahy scoffed at the notion.

“That’s the most absurd thing I’ve ever heard,” Leahy told LNC in an interview. “What is he, flying downhill?”

Go ahead, build it

“I hope they build it,” Leahy said. “They’ll spend several billion dollars—they always spend more than they should.”

Leahy remained confident the A321neo will continue to maintain its overwhelming market share lead. If Airbus must respond, it can do so with some aerodynamic clean-up of the airplane.

Then there is the nuclear option, widely talked about in aviation circles: an “A322” with a new, composite wing, more powerful engines and a couple of more rows of seats. The cost: a couple of billion dollars, mostly for the wing.

Boeing won’t launch the airplane without customers, and there will be some that want the extra capacity without needing the extra range. United Airlines is a prime target, one that likes capacity. But its interest level seems conflicted. It’s still looking at the plane and comparing it with the A321neo.

UAL ordered the 9 MAX but does not operate, or have orders for, the A321 in any version.

American Airlines, which operates the A321ceo and has the neo on order, won’t be a customer. Delta Air Lines could be, but it hasn’t ordered the MAX or the neo, and is unlikely to be a launch customer of the MAX 10. Alaska Airlines is evaluating the A321neo because of its acquisition of Virgin American, an all-Airbus customer.

Air Canada and airlines in China, India and Indonesia have been mentioned as potential customers.

Customers that might order the MAX 10 could put at risk sales of the already-struggling MAX 9. It’s probable that some orders will be swapped from the -9 to the -10.

This means the net new sales to Boeing may be minimal, in the range of a couple of hundred. There are only about 425 MAX 9 sales by LNC’s estimate. MAX 10 sales are likely to be well short of this figure.

This leaves few airplanes against which to amortize even the low budget for the MAX 10.

The 737-10 may become a solid airplane performer for what it is, but for a lessor like ALC, is it a good asset?

“That totally depends on what the customer base is,” Plueger said. “I think it’s a more difficult road or Boeing as compared to the 8 MAX. You’re life as a leasing company is to have the greatest depth of operators.

“I think it’s a challenge.”

One Comment on “If Boeing builds MAX 10, will customers come?”