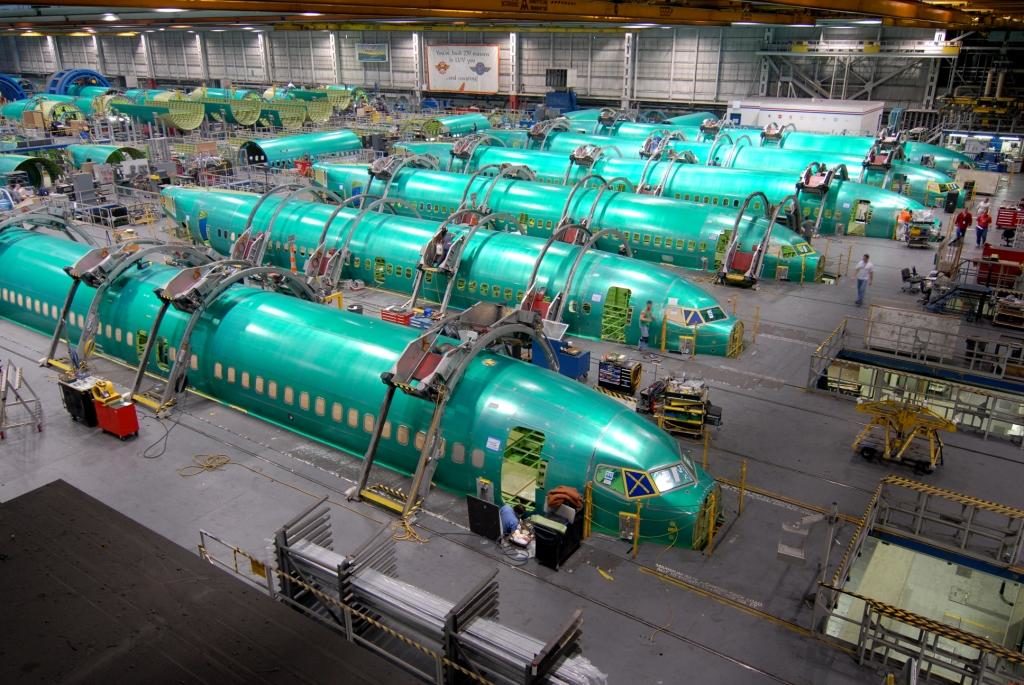 In another hall, the production is silent. The winding of the Boeing Dreamliner’s forward fuselage from rolls of tape is made with a swooshing sound. There are few people around; the machines rule.  Everything is mega large; tape-layers, tools, autoclaves, the lot.

In Wichita for 90 years

Spirit was formed 2005 when the civil production was spun off from Boeing’s defense production plants in Wichita. The site produced the B-52, B-47 and B-29, among others, over the decades.

The factory origin dates from the 1920s, when Loyd Stearman produced the legendary “Kaydet” trainer in the Stearman aircraft factory in Wichita. The windy plains were ideal for the aircraft of the time. No obstacles in sight and wind to help the aircraft take off. Wichita was the aircraft center of the US, with companies like Cessna, Beechcraft, Mooney and Stearman.

Boeing acquired Stearman at the time, both being part of United Aircraft and Transport Corporation. Boeing later dropped the Stearman brand.

The Boeing Stearman plant grew and during the Second World War, it produced the B-29 Superfortress bomber. With a huge need for labor, women were hired onto the production lines where they riveted the giant bombers, turning out four a day. “Rosie the riveter” changed people’s mind about women and industrial production.

With the 737 fuselage and the 787 forward fuselage as highlights, the Spirit production is unusually varied. During the tour, I could see “Metal in-Part out” production cells that feed the many production lines. Spirit produces many of its sub-assemblies. What Spirit doesn’t do, it gets sourced from sub-suppliers.

The metal production facilities are used in production of forward fuselages for 747, 767 and 777, as well the complete fuselage for the 737.

The 737 production line is equipped with robots and advanced laser aligning equipment. The line is totally flexible regarding the produced variant. A 737-700 fuselage can precede a MAX 9 fuselage followed by a 737-800.

Output is presently 1.3 fuselages per day with an increase planned to 1.9 per day. The fuselage is produced in a corrosion-protection green and sent by rail to final assembly at Renton (WA), Figure 2. 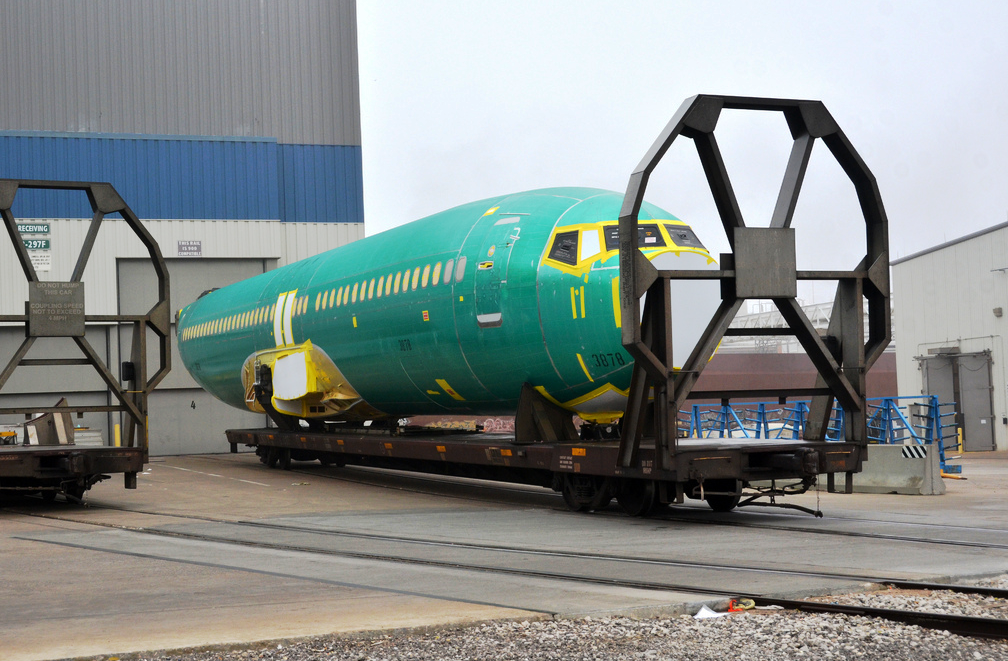 The 787 forward fuselage production is impressive. Spirit goes from a mandrel-wrapped with CFRP (Carbon Fibre Reinforced Plastic) tape to an equipped forward fuselage within the facility, Figure 3. 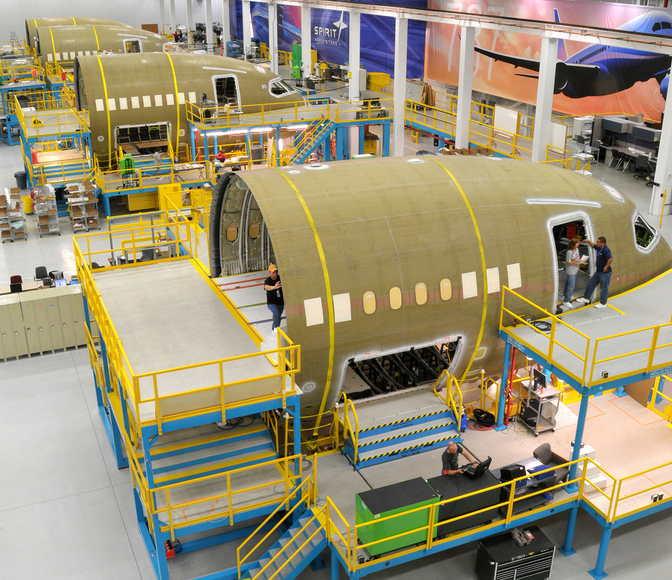 Before it ships, it’s tested for complete functionality, including cockpit avionics functions. I was surprised to spot an installed nose landing gear in the units that were ready to ship to Boeing’s Everett plant (flown with the 747 Dreamlifter).

Spirit is also producing all engine struts (called pylons in Europe) for Boeing Civil Aircraft, and most of the nacelles. I could see the strut and nacelles for Boeing’s 747, 767 and 777, both the -300ER and the new 777X.

Spirit is also active in Airbus programs. The company builds the wing leading and trailing edge elements of all the A320 aircraft and the droop slats for the A380 at its Prestwick, Scotland, facilities.

The A350 is a more important program. Spirit makes the central section as CFRP panels in Kinston (NC) and then builds them to fuselage section 15 in a factory in St Nazaire, Figure 4, France. The wing’s front spar and fixed leading edge are also within Spirit’s deliveries. 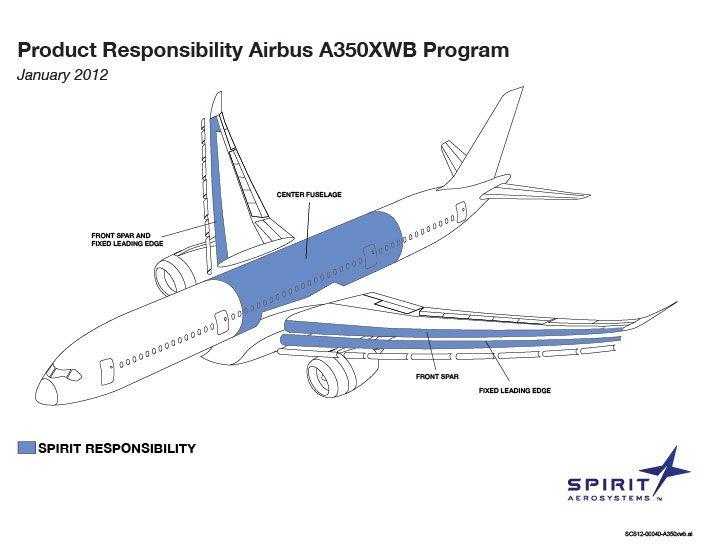 It was fascinating to see so many different manufacturing techniques in one day. It went from hand riveting of tricky sections for a classical Boeing aircraft to the advanced assembly of complete 787 nose sections.

The 787 program is unique for Spirit. It’s the first program where the company not only does the structure but the whole aircraft section including all its systems/avionics. Delivered is a complete functional unit, tested to all its functionality.

The company is a production powerhouse.