Pontifications: No sale for Boeing in Bombardier complaint

May 29, 2017, © Leeham Co.: I’m having a really hard time buying into Boeing’s arguments in the complaint about alleged price dumping by Bombardier in its deal with Delta Air Lines.

I say this despite the fact that Boeing lawyers at least four times directly and twice indirectly cited “trade publication” Leeham News and Comment in support of its case. While flattering to be used as an authoritative source, Boeing’s testimony doesn’t support the claim that Bombardier acted improperly, in my view (nor that of AirInsight, which also reviewed the testimony). There are, of course, scads of exhibits and confidential information not available for public review that could, if available for public dissemination, might change opinion.

The thing is, Boeing is known among journalists and analysts for its occasional descent into hyperbole. Or, as one reporter I talked to put it, this is an example of Cirque du Soleil acrobatics. It is with some amusement that I note Cirque du Soleil is, like Bombardier, headquartered in Montreal.

The sky is falling

For starters, Boeing asserted to the ITC that if Bombardier’s price to Delta for 75 CS100s and an option for 50 more—which Boeing calculates in $19.6m, and which Delta and BBD say is “way” low—is allowed to stand, it will start a cascading series of events that will not only put Boeing out of business, but collapse the US aerospace industry.

How many hoops does one have to jump through to reach this conclusion?

Quite a few, it turns out.

Boeing pins its assertions on the allegation of the $19.6m sales price and the ability of Delta to switch the last 25 and all the options to the larger CS300, which competes with the 7 MAX. It also claims the competition to sell airplanes to United Airlines, which BBD lost to Boeing’s 737-700s, drove the price down so low that it created a new benchmark against which all future deals will be measured—not only for the -700 and 7 MAX but also for the rest of the MAX family.

Lost sales to US carriers, Boeing claims, means Boeing will lose market share in the US, depriving Boeing of deposits and revenue to develop new airplanes.

(In its April 27 complaint, Boeing also said this deprivation would make it difficult to provide a return to shareholders.)

All this will eventually lead to Boeing’s collapse and with it, the US aerospace industry, its representatives claimed during testimony. This claim is where I have the most trouble.

Boeing claims the Delta and United deals make it impossible to sell the MAX 7. The last sale in the US was in 2011, when the program was launched and Southwest Airlines ordered 30. The last major sale was in 2013, when WestJet of Canada ordered 25.

No sales are happening in the US now, all because of the United and Delta deals, Boeing claims.

Delta’s representatives at the hearing said Boeing didn’t even offer the MAX 7 (or even the 737-700) because it had no production slots to give Delta on the timeline it needed. Furthermore, Delta said, the used airplanes Boeing did offer—19 Embraer 190s taken in on trade from Boeing’s MAX deal to Air Canada (which includes options for the MAX 7, by the way)—were purchased by Delta.

Although Delta didn’t reveal this purchase price in public testimony, it did say that finding 56 more on the open market (to reach the 75 orders that ultimately went to Bombardier) would cost 40% more than it paid to Boeing.

What does that tell you?

I don’t know the years of manufacturer for those Air Canada E-190s, but its remaining fleet are all 2006-7 build years. According to the appraiser Aviation Specialists in its valuation book, The Guide, in 2016, the current market value of 2006-build airplanes was $13.9m. For 2007, it was $15.1m. Delta’s testimony suggests its purchase price from Boeing may have been between $8.3m and $9m for those used E-190s. If this wasn’t price dumping, it certainly was a fire sale.

Or, if Delta paid CMV (or close to it), another 40% would put the price for the additional E-190s at $19.5m-$21m–a price Boeing hints at in its closing briefs. (See this report here.) I can’t see Delta paying this much for the E-190s from Boeing and certainly not on the open market.

Finally, Delta testified that even if Boeing had offered the MAX 7, Delta wouldn’t have bought it because the economics are inferior to the CSeries.

A few months later, Boeing revised the design, adding 12 seats. This was announced at the Farnborough Air Show in July. LNC’s analysis shows the Cash Operating Costs (COC) of the original MAX 7 and the revised version to be inferior to the CS300, as is the 737-700. The 737-700 and original MAX 7 COCs are inferior to the smaller CS100. The revised, larger MAX 7, about equals the seat-mile COCs of the CS100, our analysis shows.

The need to revise the design of the MAX 7, adding 12 seats, was indicative that the original design was roundly rejected by the market–having nothing to do with the CSeries, which itself wasn’t selling well because of delays and doubts about Bombardier’s very survival.

If the economics didn’t already indicate the 737-700 and MAX 7 were already dead, the sales figures should. And this is where Boeing’s case falls apart–and where Bombardier, inexplicably, fails to rest its case. And this is why I have a hard time buying into Boeing’s case.

Delta has only 10 737-700s in its fleet, for particularly difficult airports—those with short runways or hot-and-high conditions. Its last order for this sub-type was in 1997 and deliveries were in 2007-2008.

The only other two US airline customers since 2005, when the first iteration of the CSeries program was launched, are Southwest Airlines and AirTran. AirTran eventually merged into Southwest. Southwest later began converting its 737-700 orders into 737-800s. 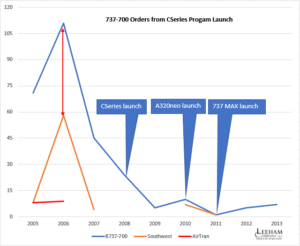 The dearth of sales for the 737-700 and MAX 7 has little to do with the CSeries. American Airlines chose the Airbus A319ceo and neo over the Boeing products in July 2011, when the MAX program (including the MAX 7) was launched. Delta’s position about the 737-700/7 has been recounted in testimony. United didn’t order the MAX 7 with its big MAX orders, preferring the MAX 8/9.

The original, 126-seat MAX 7 simply was unattractive. So, last year Boeing added 12 seats. Although it now complains no orders are forthcoming, there’s a dearth of order worldwide because the industry is on the downward cycle of the bell curve of orders.

Bombardier’s representatives, and Delta’s, point out that Boeing has a seven-year backlog for the 737. This takes it to 2024-ish.

Boeing testified Bombardier might offer a CS500, a direct competitor to the 737, which BBD says is an “if,” not a “when” (and if it did, probably not for a decade). Accordingly, Boeing fears this is the next step in its demise if the Delta deal remains unchecked.

By then, Boeing (and Airbus) should be well on the way to offering a new, clean-sheet replacement for the 737 (and A320). If Boeing isn’t offering a plane with 15%-25% better economics than today’s MAXes, NEOs and CSeries, then the company has a far bigger problem than the CSeries.

Let’s allow this fear, since in the narrow 100-150 seat market this may well come to be true. Boeing officials warned of “commercial momentum” for Bombardier because the Delta deal provides an important endorsement of the CSeries.

This is fine in theory, but in fact, Bombardier hasn’t had a significant sale of the CSeries since the April 2016 Delta transaction.

Let’s also remember this: Bombardier’s ultimate goal, by 2020-21, is to be producing 120 CSeries per year. By then, Boeing should be producing the 737 at this rate every two months. This would give Bombardier a 17% global market share against Boeing (half that if Airbus’s similar A320 rate is included).

This isn’t much of a threat.

I’ve pointed out on several occasions, in connection with Boeing’s complaints about Airbus subsidies and now the Bombardier issue, that if Boeing is as concerned about government subsidies as it claims, where is the outrage and where are the complaints to the WTO about China’s government-owned COMAC and development of the C919; and Russia’s support of Irkut and development of the MC-21?

Last week, China and Russia once again announced its joint venture for the wide-body C929. Stories are here and here.

While Boeing is wringing its hands over Bombardier’s CSeries in the 100-150 seat niche, where is the outrage toward China and Russia for single aisle airplanes that are direct competitors to the “heart of the market” 737-800/8 and 737-900ER/9?

Furthermore, the C929 will be a direct attack on the Boeing 787. Where is the outrage for the government monies going to this program?

The answer, of course, is that there is no way Boeing is going to attack the Chinese projects. China is the largest customer for Boeing in its current backlog.
Boeing’s ties to Russia are extensive, too. Russia is nearly the sole source for titanium, which is used extensively in Boeing aircraft. Boeing for years used Russian engineers on the 787 and 747-8 programs, some of whom came into the US under the H1B visa program that President Trump now criticizes.

In fact, on Friday a Boeing official said the company “welcomes” competition from China. The contradiction is just mind boggling.

According to a Reuters story last week, Boeing is pursuing Bombardier to avoid a repeat of the creation and evolution of Airbus. “Never again,” was the catch phrase, Reuters reported.

“Never again,” except as it relates to China and Russia, it seems.

47 Comments on “Pontifications: No sale for Boeing in Bombardier complaint”