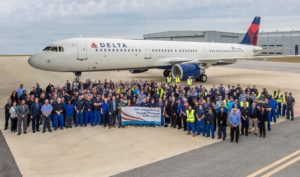 In an event timely to the Delta Air Lines order for 100+100 Airbus A3231neos, the airline just took delivery of the 50th A320 family member to be delivered from the Airbus Mobile (AL) plant. Source: Airbus.

It was a PR blow, yes. Even this was limited to those in the know.

But it wasn’t a material blow by any stretch.

Here’s why the hand-wringers are wrong.

Sure, Boeing sorely wanted to win this deal. But relations between Delta and Boeing have been bad for years, so this was a bad place to start from. The Boeing-Bombardier trade complaint, attacking the C Series order by Delta, didn’t help. These factors alone made Boeing’s chances an uphill battle.

Boeing pit the 737-10 MAX against the A321neo. As I noted previously, the MAX 10 put Boeing in the game. Pitching the MAX 9 against the A321neo clearly wouldn’t have worked. The MAX 9 carries fewer passengers, its airport performance is inferior and it has less range.

The MAX 10 carriers about the same number of passengers as the A321neo. So, winning comes down to commercial terms.

“We competed with a strong but disciplined offer in the Delta campaign,” Boeing said in a statement after losing the order.

One media outlet inferred that this meant Airbus won on price, which is a common refrain from Boeing when it loses a campaign to Airbus. “While Delta has chosen to go with Airbus and Bombardier in recent single aisle campaigns, we are proud of the 737 MAX family’s superior value and performance,” Boeing said.

Boeing, of course, didn’t compete the MAX 7 against Bombardier in the Delta campaign and by LNC’s analysis, the MAX 10’s economics are marginally better (virtually within the margin of error), because the MAX 10 is lighter than the A321neo, but it is not the plus-5% Boeing claims. The MAX 10 has worse airport performance and less range than the A321neo.

But that’s neither here nor there.

Sure, Airbus offered an aggressive price. So did Boeing. But the clincher appears to be what Delta emphasized during its Investors’ Day event: the deal with Pratt & Whitney for future maintenance, repair and overhaul (MRO) work for Delta TechOps.

CEO Ed Bastien remarked several times that the MRO will mean billions of dollars in revenue over the life of the program. TechOps will have MRO capabilities for the PW GTF engine for all of the Americas, with an estimated 5,000 engines in the program over time.

Did CFM make a similar offer to Delta for the MAX? I don’t know the answer to that but I do know from my sources that Boeing salesmen sometimes complain that CFM won’t step up to the table to help because it has an exclusive position on the 737.

In the end, the Delta order was probably Airbus’ to lose. A PR blow to Boeing? Sure. A material blow? Not even close. With more than 4,000 MAXes in backlog, 100-200 is immaterial.

85 Comments on “Assessing the Delta-Airbus order”