April 11, 2018, © Leeham News: In the second article if Long-Haul LCC is a viable business, we described the cost items which have to be part of a Revenue versus Cost analysis.

In a subsequent article, we used our performance model to develop the typical costs for the aircraft types we study. We now look at these typical costs, discuss their background and relative importance.

With our performance model, we have developed the typical costs for a modern Narrowbody (Airbus A321LR or Boeing 737 MAX 8) or Widebody (Boeing 787-9 or Airbus A330-900) when flying New York JFK to London Gatwick, Figure 1. 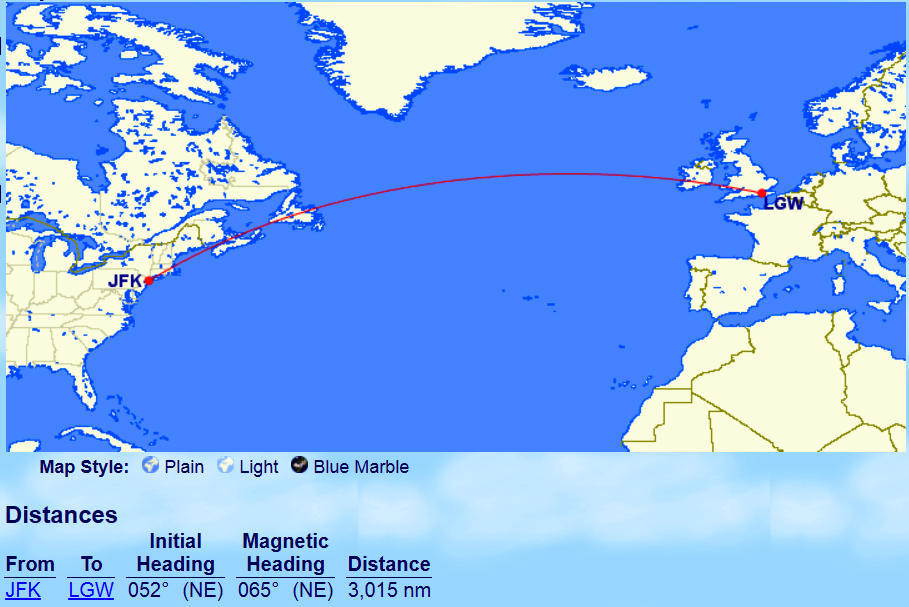 The total operational costs for our Narrowbody or Widebody aircraft for the mission is presented in Figure 2. The fuel is calculated with the present fuel price, which hovers around $2.00 per US Gallon.

These costs are the about the same for each mission over time unless winds change the fuel costs or special pricing from airports can reduce our landing and handling fee costs during the less busy winter months.

The Narrowbody and Widebody costs are the averages of the aircraft under study. This introduces no skew of the costs as these types were close in the per-seat costs for the route. Our mission is to see if we can generate enough revenue on such routes compared with the typical costs and to understand the advantages and disadvantages of using Narrowbody versus Widebody aircraft on the sector. Which of the aircraft is the slightly more economical alternative is not part of our investigation.

The studied Narrowbodies, with an average seat count of 182 seats, is about half as big as the Widebodies at an average 352 seats. We need aggressive marketing and revenue management to fill the larger Widebody to a high load factor for many periods of the year.

If we divide the total costs with the seat count, the total per seat costs are close for both aircraft classes, at around $200 per seat, Figure 2.

The Narrowbody, which has the lower trip cost and by it a lower capacity risk, has a 6.5% higher seat cost.

Figure 3 compares the distribution of the cost types between the Narrowbody and Widebody aircraft. 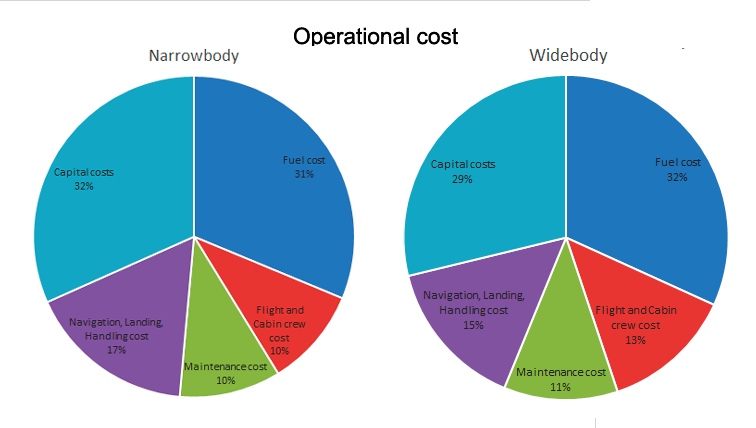 Fuel costs are close between Narrowbody and Widebody, at 31 to 32% of total costs. This was not always the case. The Narrowbody had a higher fuel consumption per seat (and inadequate range for any long-haul flights). The closing up of fuel costs is a development which has come with the A320neo and 737 MAX generation.

The engine specific fuel consumption of these aircraft is close to the engines of the Widebody aircraft. This comes from the new Narrowbody engines having increased the By-Pass Ratio (BPR) over the replaced generation more than the new generation Widebody engines.

Capital costs are the second most important cost item for a Long-Haul LCC. The shown costs in Figure 2 and 3 are typical for a smaller fleet of aircraft, rented ( Operationally Leased) from a Leasing company.

Should the airline buy many aircraft in one go (like Norwegian Air Shuttle and many other LCC’s have done) and do a sell and leaseback transaction, the Capital cost part of the pie would have been smaller. We can, therefore, assume our cost level for Capital costs are a worst-case scenario.

The Flight crew for the longer range and more capable Widebody aircraft has a higher salary than the shorter range Narrowbody aircraft. This explains the difference in Crew cost fraction. We researched the crew costs of a Long-Haul LCC ahead of the article series, its about half of the Legacy carrier’s cost.

Total cost for the airline

As explained in the first article, the aircraft operating costs are about 90% of an LCC’s costs. We shall, therefore, add 10% for Sales, General and Admin costs to these figures to get the airline cost for operating the route.