Aircraft announcements:
Jet Airways was confirmed as the airline behind an order for 75 737 Max 8s previously unidentified by Boeing. It is an additional Max order for the Indian airline, which received its first Max in June 2018. 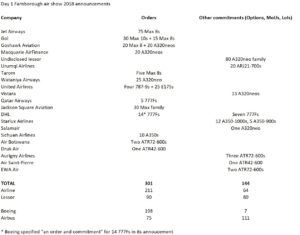 Salamair signed an agreement to add six Airbus A320neo aircraft to its fleet, of which it will lease five from an undisclosed lessor. The Omani low-cost carrier currently operates three A320s.

Gol converted 30 Boeing 737 Max orders to the largest Max 10 variant and ordered 15 additional Max 8s. The Brazilian carrier now has 135 orders for Max-family aircraft, the first of which it received in June 2018. Deliveries will continue through 2028.

Macquarie AirFinance ordered 20 Airbus A320neo aircraft. It is the first A320neo order from the lessor, which has an existing Airbus portfolio of 110 A320-family aircraft and nine A330s.

An undisclosed lessor signed a memorandum of understanding (MoU) for 80 Airbus A320neo-family aircraft. Engine selection is still to be made.

Goshawk Aviation ordered 20 Airbus A320neos. The Dublin-based lessor has not chosen an engine yet.

Urumqi Airlines agreed a letter of intent for 20 Comac ARJ21-700 aircraft. If firmed up, this would make the Chinese carrier a new customer for the aircraft.

Wataniya Airways firmed up an order for 25 Airbus A320neo-family aircraft following an MoU at the 2017 Dubai air show. Golden Falcon Aviation, the exclusive aircraft provider of Wataniya, is the purchaser.

Vistara signed a letter of intent (LoI) for 13 Airbus A320neos and committed to rent an additional 37 from lessors.

Qatar Airways ordered five Boeing 777 freighters to add to the 13 it already operates. The deal was announced as a commitment in April.

Jackson Square Aviation became the 100th Boeing 737 Max customer with an order for 30 Max-family aircraft. It is the lessor’s first direct purchase from a manufacturer.

DHL placed an order and commitment for 14 Boeing 777 freighters and took purchase rights for seven additional freighters. A portion of the order was previously unidentified on Boeing’s website.

European turboprop manufacturer ATR announced a batch of orders and commitments from five customers ahead of the air show. On 13 July it released details of nine orders:

Sichuan Airlines selected the Rolls-Royce Trent XWB engine for an order for 10 Airbus A350 aircraft. The Trent XWB is the only engine choice for the aircraft.