Late last week, the US Air Force weighed in that it’s unhappy, again, with Boeing over the KC-46A program. The Air Force was previously open about its dissatisfaction with Boeing’s performance. But top officials were quick to contact the new CEO with its unhappiness.

A new software problem was found on the 737 MAX which may add some time to the recertification timeline. The problem involves booting up two computers on start up and isn’t considered a big issue.

Last November, LNA posted a graphic that listed a host of problems that occurred under Denis Muilenburg’s watch. Calhoun must deal with these, too. 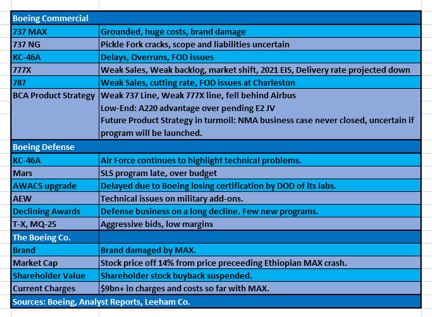 Today, we take a look at another challenge Calhoun must face: Boeing’s commercial airplane product strategy.

Despite Boeing’s long-standing PR that everything is fine, it’s not.

Boeing has, since 2011 with the launch of the MAX, been the follower, not the leader or innovator that its storied history demonstrated.

Boeing dithered launching the New Midmarket Airplane (NMA) or, alternatively a single-aisle Future Small Airplane, both concepts discussed since 2012. Once the MAX crisis erupted, any new airplane program launch is on hold until the MAX returns to service. 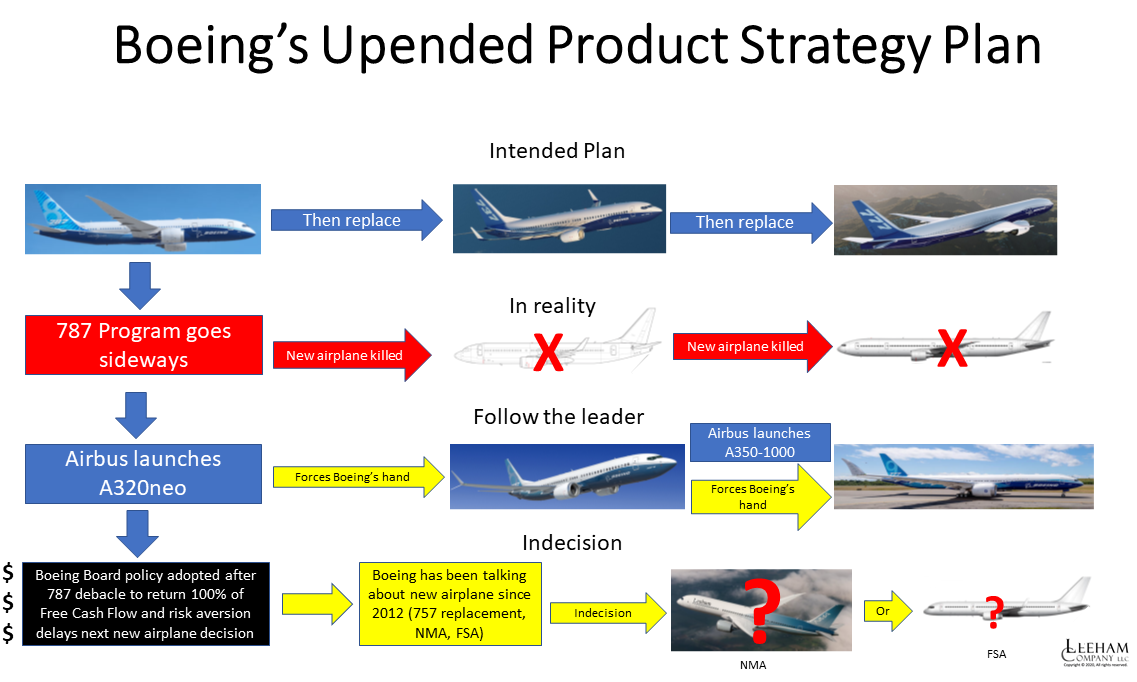 The 787 technically is a superb aircraft. Executing the design, industrial partnerships and production of the program was a disaster.

And it is this disaster that upended Boeing’s product strategy the reverberates to this day.

The 787 program was launched in December 2003. The planned entry-into-service was of May 2008 was driven not by engineering timelines, Rather, promises were made to Chinese airlines to have the 787 in service in time for the 2008 Summer Olympics hosted for the first time in China.

Some suppliers believed the timeline was unrealistic. They were right. The plethora of problems drove the program to billions of dollars in cost overruns and an EIS 3 ½ years later than promised.

Had the 787 EIS been on time and on cost, the plan was to replace the 737 with a clean-sheet airplane design.

Boeing studied two designs: a single-aisle aircraft and a twin-aisle. Both were larger than the 737 NG, reflecting the trend toward higher capacity airplanes.

If this sound like today’s NMA, that’s because the NMA is what Boeing looked at in the period leading up to the July 2011 launch of what became the MAX.

Nevertheless, Boeing showed the single-aisle concept to the market and Airbus was afraid this was the concept Boeing would launch. Doing so would force Airbus to launch a new single-aisle design.

The decision to offer a re-engined A320, the neo, was a multi-billion dollar risk by Airbus. John Leahy, then-chief operating officer-customers, gambled that winning an order for the neo from American, Delta or United airlines would force Boeing’s hand to re-engine the 737. He was right.

American bit and Boeing decided to re-engine the 737 rather than launch a new design airplane.

Meanwhile, Boeing had another problem with its large airplane market.

Boeing’s plan was to replace the 777 Classic with a new design once the 737 was replaced with one.

Airbus’ A350-1000 initially stumbled with an engine that wasn’t powerful enough and needing some tweaks to the wings. This modifications were made. With them, the -1000 had superior performance and economics compared with the 777-300ER, Boeing’s powerful cash cow in the 300-400 seat sector.

Boeing was still weighed down by the 787 program.

In January 2013, the 787 was grounded for three months following fires with the new lithium ion batteries. Financial losses were still climbing.

There was little appetite, either for risk or financially, to launch another all-new airplane program. Boeing made the decision to proceed with a derivative of the 777. A new composite wing, new engines, system improvements, a fuselage stretch, folding wingtips and other improvements were design for the 777X.

The -8 proved to be a sales dud and may never be built. Seventy-two percent of the orders came from the Big 3 Middle East airlines. Since 2013, the fortunes of these carriers took a significant turn for the worse. Etihad Airways and Emirates Airline canceled nearly 50 orders. There are only 286 left by LNA’s count. Some of these now look shaky.

After years and billions of dollars down the drain with the 787, the Board of Directors and CEO Jim McNerney, followed by CEO Dennis Muilenburg, established a policy of returning 100% of free cash flow to shareholders. This took the form of share buybacks and increased dividends.

David Calhoun has been on the Board since 2009. Board votes and debate aren’t public, but it is assumed he supported this policy.

Calhoun has more than enough on his plate to pick up Boeing and turn it around.

Deciding what to do about Boeing’s 7-Series product strategy is a big issue.

Is Boeing going to launch a new airplane program when it’s down?

Will Boeing put off a decision for another year? Or two?

The 737 MAX must return to service. The Boeing Co. should return to be an innovator and a leader.

Or will it become McDonnell Douglas and wither away?

This is the long-term decision facing David Calhoun.

← Bjorn’s Corner: Why e in ePlane shall stand for environment, Part 5. Distributed propulsion.
Environment and aviation, a gap between aspirations and reality →