The CEO of Republic Airways Holdings seems to be vying to be America’s version of U-Turn Al, Akbar Al-Baker, the CEO of Qatar Airways.

Bedford appears to be engaged in a campaign to raise questions about the Bombardier CSeries, for which he has orders and options for 80 CS300s, much the same way U-Turn Al alternatively praises then complains about the Airbus A350, Boeing 747-8F (ordered by Cargolux, in which Qatar owns a third) and the Boeing 787. U-Turn Al has also alternative praised, condemned then praised the Airbus A320neo, Bombardier CSeries and the Pratt & Whitney GTF.

Keeping up with U-Turn Al’s about-faces has been a dizzying prospect.

Bedford praised the CSeries when ordering it but has become increasingly skeptical of the program once he ordered the A319neo (with CFM LEAP engines) in what was a financial bailout of his ailing company being dragged down by Frontier Airlines. The Airbus order raised questions whether Bedford would cancel the CSeries since the A319neo competes with the CS300. Bedford initially said the order would stand. More recently, he appears to be doing everything to cast a shadow over the program.

In the March 12 print edition of Aviation Week, Bedford expanded on comments he made during the recent earnings call, comparing the CSeries to the Boeing 717. Boeing inherited this program after merging with the dying McDonnell Douglas Corp., which launched the airplane as the MD-95.

The comparison is misplaced. Here’s why.

The following charts show sales of the CSeries last year. 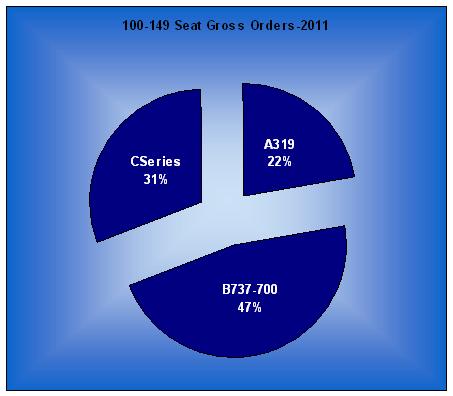 This chart includes orders for 20 737-700s from lessor Aviation Capital and 40 from Southwest; there were 64 737-700 orders recorded in 2011. However, ACG always orders the least expensive -700, allowing it to put down small initial deposits. ACG later converts the orders to the large, more expensive -800. Likewise, Southwest is now converting its -700 orders to -800s, so these 40 are likely to disappear.

Nonetheless, BBD orders held up quite well in the 100-149 segment. The perception issue BBD has is that pontificators and critics compare the CS100/300 sales with the entire family line of Airbus and Boeing single aisle airplanes–a truly apples-to-oranges comparison.

With the certainty that ACG will swap its -700s for -800s at a later date, per its history, but retaining the Southwest orders, the sales performance last year looks like the following chart. 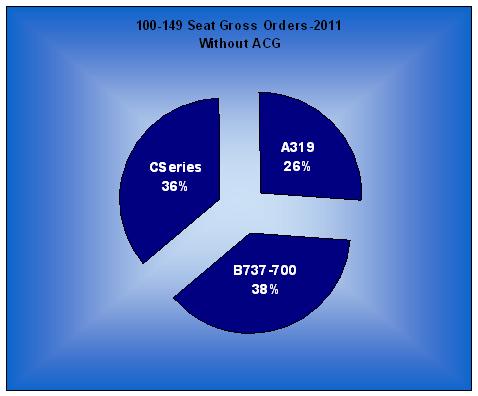 But even this isn’t the whole story. When considering sales performance in the 100-149 seat market segment, none of the pontificators consider Embraer, whose sales last year of the 100-seat E-190 and 122-seat E-195 were by far and away the market leader. 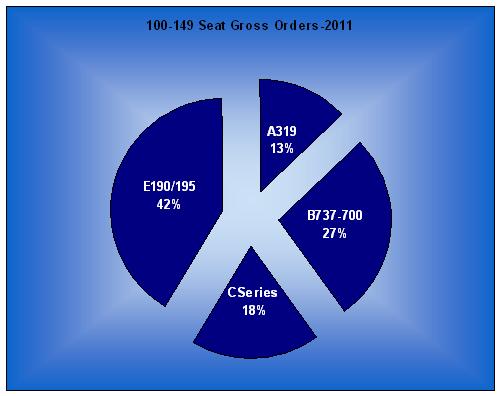 Embraer sales of this mature product today “owns” the 100-149 segment.

As noted, E-Jet sales showed a similar number to BBD in the run-up to one year from EIS. The proof for BBD will be how sales shape up beginning late in the fourth quarter. 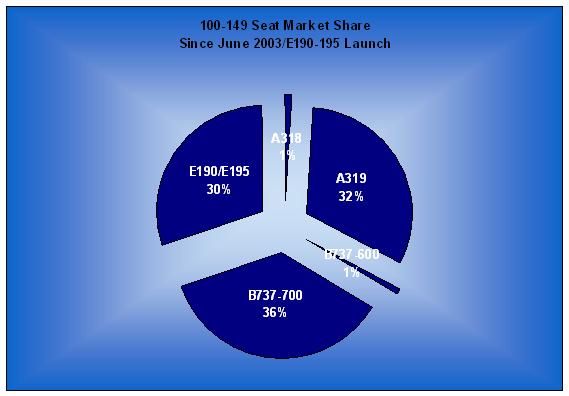