Major orders last week for Bombardier and Mitsubishi and the release of the Airbus Global Market Forecast provide an opportunity to look at market segments that don’t get a lot of attention in the shadow of the greater focus on the A320/737 and medium-twin aisle sectors.

These over-shadowed sectors are the 70-99 seat regional jet; the 100-149 seat single-aisle market; and the Very Large Aircraft.

Due to the scope and length of each examination, we will detail these sectors in three parts.

Part 1: 70-99 Seat Sector
This is a shrinking market for the regional jet as increasing fuel prices make it more and more difficult for regional jets to be economical. Nonetheless, there are several established and new entrant players in the market:

The Original Equipment Manufacturers don’t forecast the 20-year demand using the same metrics. Airbus begins its forecast at 100 seats (the subject of Part 2 of our Assessments). Boeing starts at 90 seats but does not break out 90-130 seats from its larger single-aisle forecast. Bombardier and Japan Aircraft Development Corp. (JADC), which is partly owned by Mitsubishi, forecast in the same 60-99 seat sector. Embraer forecasts the 70-90 and 91-130 seat sectors, which is where its aircraft are centered.

The various forecasts are:

Bombardier’s CRJ Series created the regional jet market, but its innovation has been eclipsed by the E-Jets, which have far greater passenger appeal. BBD and EMB each have undertaken Performance Improvement Packages aimed at increasing fuel efficiencies and updating the interior. Embraer’s order lead over the CRJ, however, remains unchallenged. 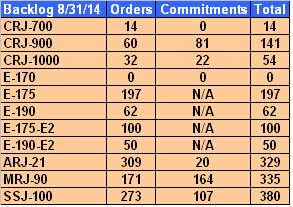 Embraer’s E2 jet offering is off to a good start and demonstrates the dominance EMB will have.

The ARJ-21 is China’s first serious effort at producing an indigenously-designed and produced commercial aircraft. Its gestation period has been painfully long. Roll-out in 2007 to a forecasted 2015 EIS is eight years. The order book numerically is respectable—but all but a few are captive orders for Chinese airlines. Lessor GECAS has an order for five plus options for 20. This will be a niche airplane from which COMAC learns for its larger, mainline C919 program and future designs. We do not consider the ARJ-21 to be a viable commercial project.

The MRJ-70 has yet to receive an order, a testament to the declining 70-seat market. The MRJ-90 now has 407 orders and commitments but the 150 firm orders from two customers (Trans States and SkyWest in the USA). The customer base is a mere six, including start-up Eastern Airlines which in September signed for 20+20. The MRJ is delayed by two years and the airplane has yet to make its first flight. We believe that as the MRJ enters flight testing, affirming (or not) the promises made by Mitsubishi, and as EIS approaches, more orders will be forthcoming.
The SSJ-100, which actually seats just below 100 passengers, numerically appears to have a solid footing with a backlog of 273 and options for 107 from 27 customers. Most customers are under the Russian sphere of influence.

However, program delays and production inefficiencies resulted in only 45 deliveries since EIS in 2011, a rate of only 15 deliveries a year vs a projected 70. In-service issues also resulted in lower utilization and some spot-groundings.

The current international political situation and sanctions against Russia also are likely to adversely affect the potential for the SSJ. We don’t view this aircraft as more than a niche player.

Thus, we conclude that the fact that Embraer and Mitsubishi offer modern technology aircraft with preferred passenger experience, and aircraft free of political intrigue or questionable product support offered by China and Russia, will further gravitate orders to these two suppliers.

Part 2, our Assessment of the 100-149 Seat Market Segment, will follow next week.

← Aviation conferences this month
New and Derivative airplanes: Some good, some not; Part 1 →