Download
Subscription Required Introduction As Brazil's budget airline GOL reportedly evaluates whether to acquire 20 Boeing 737-7s or Embraer E-195 E2s, the principal of the "CASM Paradigm" is a concept worth examining.

This head-to-head evaluation of the E-195 E2 and the 737-7 MAX is a rarity. Typically the head-to-head involves the Bombardier CS300 and the Airbus A319neo. All three have the same seating capacities. The E-195 E2 has slightly fewer passengers than the 737-7 with similar seat pitch. The competition is also what might be seen as a contrary competition. Airframers agree: the airline industry is upgauging. Capacity discipline, long elusive until after the global financial collapse of 2008, has been driving load factors higher. But lowering unit costs, or the Cost per Available Seat Miles (CASM) has long been the principal measure by which airlines, OEMs and aerospace analysts measure efficiency. Although Trip Costs of aircraft operating over a route is important, the trend toward upgauging at all levels clearly is the driving force. 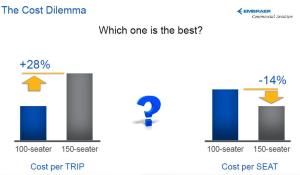 Figure 1. It's an age-old debate: the cost per available seat mile (CASM) vs trip cost. CASM typically wins, and the airline industry is migrating toward larger aircraft. Embraer, not surprisingly, thinks this has gone too far. Graphic: Embraer, reprinted with permission. Click on image to enlarge.

Embraer takes a different view, arguing that trip costs and a smaller airplane should trump the CASM obsession. A smaller airplane will mean higher yields, EMB says. A larger airplane provides lower trip costs but drives yield lower. We visited Embraer's headquarters earlier this month and received a full briefing on what EMB calls the CASM Paradigm. In our report today, we detail the presentation and discuss other considerations beside CASM vs Trip Costs that drive the size of the aircraft acquired. Summary
Login