It’s one of the bitterest rivalries in the industrialized world: Airbus vs Boeing.

Despite being world-class companies, executives at each often snipe at each other’s airplanes, claiming superiority in economics and passenger appeal. Like lawyers arguing a court case, data is typically selectively used to advance the claims.

One of the most hotly debated issues between the two companies is which is the best single-aisle airplane, the ones that fly the most routes in the world and which carry more passengers than any other type: the Airbus A320 or Boeing 737 families. 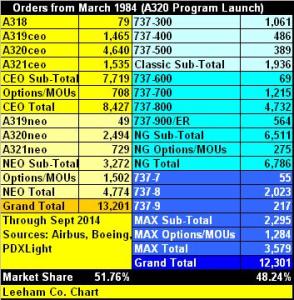 From March 1984 when Airbus launched the A320 through September, the European airplane has sold more airplanes than Boeing has sold the various 737s during the same period. Both companies have announced hundreds more orders since October 1. Click to enlarge.

When the count is adjusted to start from the A320’s program launch, Airbus can correctly claim it has sold more A320 Family members than Boeing has sold 737 Classics, NGs and MAXes over the same period.

The 737, which entered service in 1968, had a solid customer base built up in the 16 years before Airbus launched the A320 program in March 1984. The so-called 737 Classic (300/400/500) is no longer in production, having been superseded by the 737 Next Generation (NG), launched in November 1993. The NG and the ceo are still in production. Coming from nowhere, with no customer base, Airbus captured 47.5% of the firm orders and 48.9% of the firm orders plus options, letters of intent and memorandums of understanding.

Airbus launched its re-engined A320neo (New Engine Option) in December 2010. Boeing launched the 737 MAX. the following July. These each come in three sub-types. Airbus is the runaway-market winner.

Boeing points out that Airbus had a seven month head-start on program launch and claims that since the MAX was launched, it’s won 50% of the campaigns. The website PDXlight.com provides an independent look at sales in the days since launch; the A320neo consistently outsells the 737 MAX.

Boeing’s dominance in the single-aisle is a thing of the past, and it won’t return for at least another decade and perhaps a decade and a half—certainly not until Boeing designs an entirely new, “clean sheet” airplane and this even depends on the Airbus response.

Boeing CEO Jim McNerney, asked about the market share on the third quarters earnings call Oct. 22, maintained Boeing’s long-running statements that it will recover to obtain a 50% share of the A320-737 market.

Airbus’ isn’t concerned about the prospect of a Boeing NSA, or New Single Aisle airplane. Kiran Rao, Airbus’ executive vice president of sales and marketing, and John Leahy, chief operating officer-customers, said on several occasions that there won’t be enough technological advances in engines and airframes to support a new, clean sheet airplane before a 2030 entry into service, or EIS. It’s possible that by 2025 an NSA could be designed and into service with 25%-30% lower operating costs than today’s A320s and 737s. But if the benchmark is changed to the new A320neo and 737 MAX, each predicted to be 14% better than today’s airplanes, there is a huge challenge to achieve 25% or better by 2030, let alone 2025. It can’t be done by the earlier date, Rao and Leahy say.

Boeing claims its 737-800 and successor the 737-8 are about 8% more economical per seat. Airbus makes counter-claims, but airlines that evaluated the planes and some that operate both the A320ceo and 737NG say Boeing has an operating cost advantage of only 2%. But customers, whose opinions count far more than the hype promulgated by Airbus and Boeing, say the A321neo is a superior airplane to the 737-9 and sales figures support this.

On Oct. 21, Airbus upped the ante. Airbus confirmed to the on-line newsletter Leeham News and Comment that it now is offering an A321neo high gross weight that will replace the Boeing 757-200 on 3,900nm routes that are too “thin” for long-range twin-aisle airplanes like the Airbus A330 or Boeing 787 that carry twice the passengers of the 757. Boeing’s 737-9, with a basic design dating to the 1960s, can’t be further developed to match the new A321neoLR (Long Range).

At the low end of the Airbus and Boeing offerings, the smallest A319ceo and 737-700 on their last legs. There have been few recent sales and the backlog for each is winding down as deliveries are made. Their replacements, the A319neo and the 737-7, are largely regarded in the industry as placeholders, rear guard action to serve as a road-block, if one is needed, against the new, clean-sheet 135-seat Bombardier CS300 and Embraer 122-seat E-195 E2. The strategy is more illusionary than real. There are more than 180 firm orders for the CS300 (EIS late 2015 or early 2016) and 50 for the slightly smaller E-195 E2; the latter is still in its infancy, with an EIS of 2019. There are just 49 orders for the A319neo (EIS 2017) and 55 for the 737-7 (EIS 2019). There are two identified customers for the A319neo, Frontier Airlines and Columbia’s Avianca, and 12 orders listed as Unidentified customer(s). Frontier is transitioning to an Ultra Low Cost Carrier and will likely opt for the larger A320neo or even the A321neo, the largest member of the family. Avianca needs the hot-rod performance of the high-powered, light-weight A319neo for its South American service and will probably take the order.

The 737-7, on the other hand, is problematic. Southwest Airlines in the USA has 30 on order and Canada’s Westjet the other 25. When the time comes to “cut metal” about 2018, it’s quite possible each will upgauge to the larger 737-8.

This leave Boeing in quite the quandary: a 737 MAX family with a good-selling -8, a non-existent -7 and a poor selling -9.

At the October European conference of the International Society of Transport Aircraft Traders, a poll was taken of the 1,200 delegates asking if Boeing or Airbus had the more competitive single-aisle airplane. Fifty percent of the audience voted for Airbus; just 23% for Boeing. It’s quite the comedown for the proud Boeing.