Our post last week about the formidable challenges still facing Bombardier for the CSeries brought some surprising reaction, particularly on Twitter. And I didn’t see it coming.

We’ve been doing risk assessments of “skyline” quality for a couple of years now, including Bombardier, which is why the reaction to last week’s post came as a surprise.

For Bombardier and the CSeries, which has 600 orders and commitments for the CSeries, of which 243 are actually firm orders, there is an inordinate amount of country and region risk to the orders and commitments. Russia, Ukraine and the war zone of Iraq are Red in our Risk Assessment. Republic Airways Holdings is Red because its intended use for the CSeries, Frontier Airlines, was sold, the CEO Bryan Bedford has said several times the airplanes don’t fit in the business plans of the remaining carriers owned by Republic and now a pilot shortage means reducing operations, not expanding them. Since our CSeries post, Cowen & Co suggests that Republic Airways might be heading for bankruptcy unless its long-running issues with its pilots are resolved, currently a dim prospect. If Republic seeks Chapter 11, the CSeries orders are gone.

Yellow is assigned to any start-up carrier, the Middle East and all Letters of Intent. BBD has so far a poor track record of converting LOIs to firm orders and LOIs don’t mean much when it comes to the bottom line. I have faith in the new management team and “get” that obtaining new orders from blue chip customers takes time, but LOIs still haven’t been converted. So they are Yellow in our Risk Assessment.

Bombardier’s spokeswoman told The National Post it had no indication of cancellations or deferrals from those customers on our Risk Assessment Yellow-Red list. We didn’t suggest it did. We merely see the prospect of trouble coming. It’s important to note, as did The National Post in my interview with the paper, that these risky customers also present an opportunity for BBD to resell these positions potentially made available from deferrals or cancellations to better quality, blue chip customers looking for earlier delivery slots than can be offered by Airbus and Boeing.

I know from talking with BBD this is exactly the thought process.

Over at Airbus and Boeing, Boeing likes to boast its customer quality skyline is better than Airbus and our Storm Warning Flag assessment generally agrees. Airbus is willing to take riskier bets than Boeing and, as a consequence, overbooks its single aisle orders a bit more than Boeing and tends to have somewhat higher cancellations than Boeing. In the past we’ve tagged Airbus customers Air Asia, Air Asia X and Norwegian Air Shuttle as carriers to watch for over-ordering airplanes and growing too fast. LionAir and Norwegian also fall onto the Boeing list of Storm Warning flags, for the same reason. 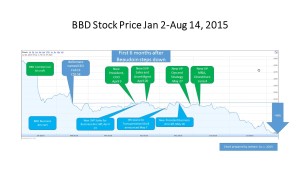 The stock market hasn’t been patient with Bombardier since Pierre Beaudoin stepped down as CEO. Click on Image to enlarge.

We said many times that the CSeries and the CS300 has better economics than the baby Airbus and Boeing airplanes. This has not changed. But some blue chip customers who aren’t in war zones would be nice to have, and so would converting LOIs to firm orders–and soon. Investors aren’t happy at with the company since Pierre Beaudoin stepped down in February as CEO. There have been a couple of stock downgrades from long-term hold-outs. The stock price has gone down steadily since February, closing Friday at a low.

The new CEO, Alain Bellemare, has been in charge for only six months. He’s made a number of changes in key personnel in the commercial and business aerospace divisions. (I don’t follow trains.) It’s taken years for the prior management to dig the hole BBD is in and it’s unfair to expect Bellemare to dig out of the hole in six months. But the market, notoriously impatient in the best of times, certainly has shown its displeasure that no firm sales of the CSeries have been made this year.

They’re going to have to wait longer, if carriers are standing by for entry-into-service before jumping. EIS is now scheduled for 1H2016 (hopefully 1Q) with Swiss. That’s a long time form investors to wait. They need to see some LOIs converted this year and want to see some new orders as well. There remains a confidence issue and new sales will be the only thing to shore this up.

31 Comments on “Pontifications: Storm warnings ahead”