Boeing stock tanked about 10% last Wednesday when the company surprised analysts with unexpected news and below expectations 2016 guidance.

What the heck happened?

For the behemoth airframe manufacturer, the “Street” doesn’t like negative surprises. And Boeing did just that. I report on this in my new column for Forbes on-line, posted right after the second attempt at the earnings call. Since that posting, I’ve talked with an analyst who, with mounting frustration, asked, “How could Boeing give guidance that was $1.20 [per share] below consensus? They knew the 737 MAX was going to go through the same thing as the 777X. As recently as October they were saying it wouldn’t. 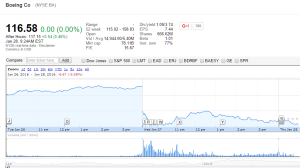 Boeing stock tanked on earnings call day last week on negative surprises and guiding lower than expectations. Screen shot of the day after. Click on image to enlarge.

“How can you be going to rate two [production of two 767s per month) and still deliver fewer airplanes?”

Indeed, the question about the MAX is particularly salient. Last year, in the pre-Paris Air Show media briefings, Boeing explained that as it pulled down the production rate of the 777 to 7/mo (making last week’s announcement on this point rather superfluous), officials gave a muddled explanation about “shooting blanks” that befuddled journalists and even respected aerospace analyst Richard Aboulafia.

But the point is this: Boeing said that despite the rate reduction, the all-important deliveries would not match production during the transition. It was a point lost on most of the journalists, although some Wall Street analysts correctly picked up the nuance from news reports and factored this in to their subsequent research notes.

This alone should have given the analysts a clue that something similar would occur with MAX—but it didn’t. Neither did Boeing rise to the occasion, after the scathing and confused press reports about the 777 transition—and begin to lay the groundwork with the MAX transition.

To its credit, officials last week gave a clear and concise reason why there will be fewer 737 deliveries this year than in 2015. As more MAX test and early production MAXes come off the line for testing, certification and delivery in 2017, these take up production slots.

But it was too late. This, plus lower financial guidance, and the revelation that there will be only 10 767s delivered this year instead of 2015’s 16, combined to send the stock down 10% at one point during the day, the worst one-day decline since 2001. The stock closed at its 52-week low. Even the multi-year policy of upping stock buybacks and hiking dividends hasn’t been enough to prop up the stock. (One can only imagine what the actual value of the stock would be without the current $14bn share repurchase program.)

Despite more than $2bn in new funding and a new executive team, BBD still hasn’t won a new order for its C Series in nearly a year and a half—not even converting MOUs and LOIs to firm orders. 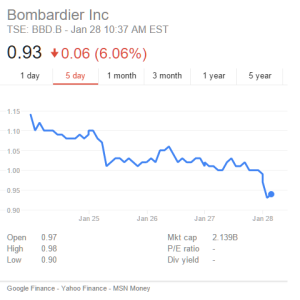 BBD lost the highly anticipated order for C Series from United Airlines to Boeing. UAL chose to buy the current generation 737-700 for what is widely believed to be a cheap price that undercut what BBD could sell the C Series for, despite writing off $3.2bn in development costs that year that shaved an estimated $5m off the purchase price. (We at LNC believe there were other factors involved, too.)

Horizon Air, the sibling to the USA’s Alaska Airlines, said it will let 15 Q400s go at the end of the lease terms and replace them with jets. These will be most likely Embraer E-175s, which offer a superior passenger experience than BBD’s competing CRJ900. For Alaska, pitched in an intense market share battle with Delta Air Lines, the passenger experience is of keen importance.

ATR, BBD’s rival in the turboprop arena, said it will make a new effort in North America, which has been BBD’s exclusive domain for new aircraft sales for more than 20 years. (See also our story from March 2015.) ATR already commands nearly 90% of the global market when measured by backlog. By all appearances, ATR is moving in for the kill. There is buzz in the market that ATR’s 50% owner, Alenia, may partner with Embraer to create a new generation turboprop; Airbus, ATR’s other 50% owner, refuses to greenlight such a project, citing the overwhelming market share currently held by ATR. (Today’s low fuel prices reduce the advantages of a turboprop over a jet as well.)

BBD’s public desire for another $1bn from the Canadian national government says the company is still in financial stress. The government’s torpedoing of restructuring the agreement banning commercial jet service at Toronto’s downtown airport sinks a conditional order from Porter Airlines for the C Series.