Pontifications: “Troubled” 787 is a thing of the past

LNC has been beset by technical issues since Aug. 17 that interferes with e-mail notification as well as links to Twitter, Facebook and Linkedin. We’re working on it with WordPress.

First was ANA’s Boeing 787s were hit by issues with its Rolls-Royce engines. Corrosion was found on key engine parts. ANA cancelled flights to inspect and repair the engines.

Unfortunately, some media characterized the matter as the “latest” to hit the “troubled” 787. The London Telegraph is one example.

This characterization, of course, refers to the history of the 787 with its design and production challenges and later by the grounding from the lithium-ion battery fires.

The battery issues are behind Boeing, too.

That ANA’s 787s have some engine issues is simply part of aviation. GEnx engines on the 787 also have had technical issues, as have the virtually identical engine on the 747-8. GE90 engines have had problems on the 777.

The 787 has a solid record of in-service performance today. The engine issues have nothing to do with what dogged the program previously. The characterization and link by some media was unfair. 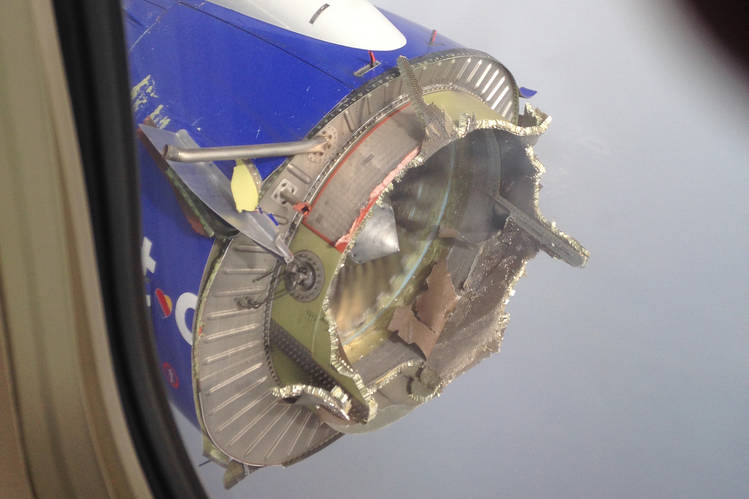 Southwest’s uncontained engine failure last week was an event that had clear safety implications. Any uncontained failure does.

In this case, parts of the front of the CFM56 penetrated the fuselage, resulting in a depressurization. Noone was injured. Parts from the engine also damaged the wing.

The event is very rare for this engine type. The CFM56 is one of the most reliable, if not the most reliable engine in commercial aviation. The engines routinely last 25,000 hours before removal from the wing is required for heavy maintenance.

It’s also very rare, period. And when it happens, the results are sometimes spectacular.

The British Airways Boeing 777 uncontained failure at Las Vegas happened on the ground. The plane caught fire, passengers evacuated but other than the usual evac injuries, none of the passengers were hurt by the engine failure itself.

Qantas Airways flight 32, an Airbus A380, had just taken off from Singapore when one of its four Rolls-Royce engines blew up. Parts penetrated the wing, but not the cabin. The flying skills of the pilot prevented the failure from becoming a loss of the aircraft.

38 Comments on “Pontifications: “Troubled” 787 is a thing of the past”