United was one of the launch customers for the 747-100 and for the 747-400. A loyal Boeing customer (until Steve Wolf became CEO), UA flew every 7-Series airplane (in addition to the Douglas DC-8) Boeing designed. It often served on the design committee. 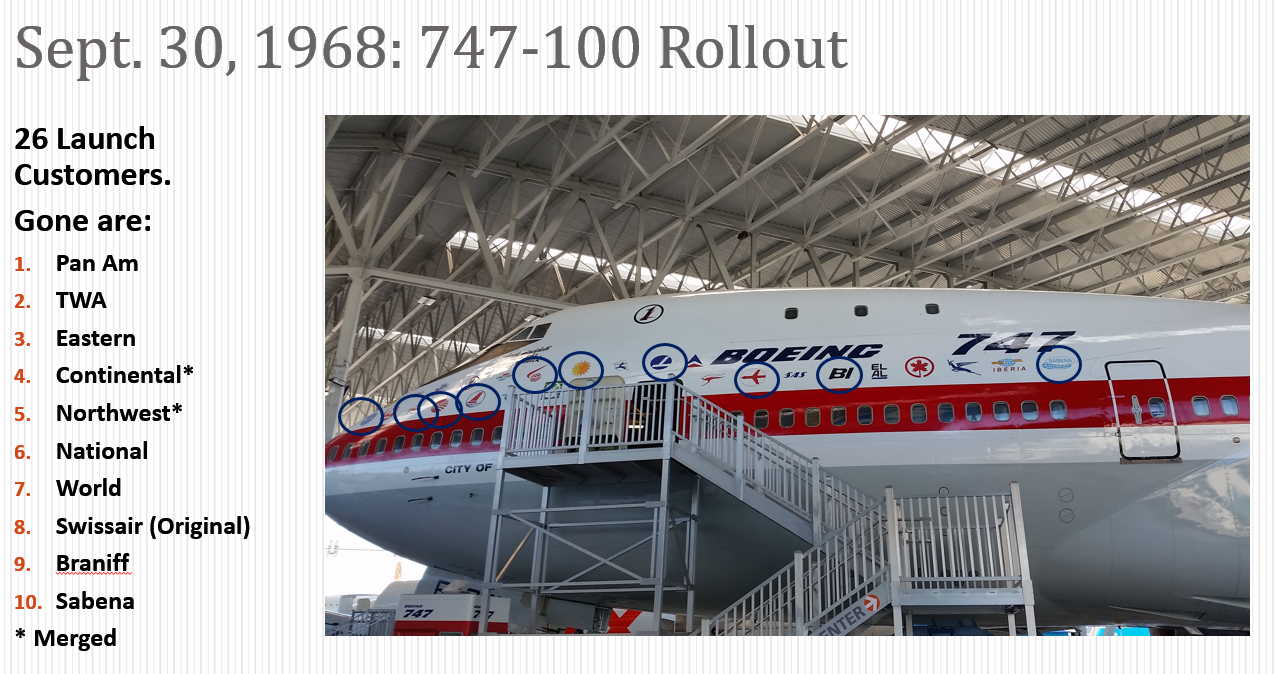 Boeing 747-100 prototype, now on display at the Museum of Flight in Seattle at Boeing Field. Click to enlarge for a crisp view. Photo and additions by Scott Hamilton.

Delta was an original customer for the 747, but only as an interim airplane until the preferred Lockheed L-1011 could be delivered. The 747 was ill-suited for Delta’s route system in the 1970s, but widebody airplanes were the rage then. The L-1011 was far better for the route system.

The 747-400s Delta operated in recent years were inherited from its acquisition of Northwest Airlines. Northwest, like United, was a launch customer for the 747-100 and it was the first operator of the 747-400. With its route system to the Orient (remember, NW was then known as Northwest Orient Airlines), the 747 was a valuable addition to the airline.

Not to be left behind, American also ordered the 747-100 to compete against United and TWA on trans-con routes. During the late 1970s, American became financially challenged in the Jimmy Carter era with the Arab oil embargo. The 747s were sold off, with one going to NASA to serve as the Space Shuttle airplane. American 747s also appeared in the mediocre movie Airport 1975 and the even worse Airport 1977.

After disposing of the 747-100s, American later won a route between Dallas and Tokyo. No airplane at that point, other than the 747SP, could do the trip non-stop. American acquired two and used them until the McDonnell Douglas MD-11s were delivered.

Later, when the US opened up competition to US airlines for routes from six US cities to several in Japan, American contracted with Canadian Pacific Airlines to purchase two of their undelivered 747-400s for use on Chicago-Tokyo if awarded the route. United won and American canceled the purchase.

The Boeing 747 is, was and always will be an iconic aircraft. It ushered in the widebody era, it became prestigious to operate it, it was prestigious to fly in it and state-owned airlines that often had no business buying it did so anyway for the prestige. No other airplane—not even the Airbus A380—carries this legacy.

Boeing 787s and Airbus A350s followed and this was the death knell. It took a long time to die. Hail and farewell to a long time, good and old friend.

Ted didn’t ask me to comment on Pan Am, but of course, no article on the 747’s launch can be complete without Pan Am.

Juan Trippe, the CEO of the storied airline at the time, persuaded Boeing’s CEO Bill Allen to build the 747. Pan Am ordered 25, a massive order for the time and one which in retrospect started the long decline of Pan Am due to the financial strain. (There were many other reasons for Pan Am’s eventual collapse; the 747 was hardly the cause.)

Trippe retired from Pan Am a few years later, with many suspecting he got out while the getting was good because he saw what the over commitment of the 747 would do.

Pan Am’s inaugural flight from New York to London on Jan. 21, 1970, got off to an inauspicious start. The giant engines, the largest ever built, were temperamental. They overheated on the taxiway. The plane turned around and another 747 was brought out for the flight.

As Pan Am’s fortunes declined, it was indeed saddled with too many 747s, all of which were aging and becoming inefficient.

The passing of the 747 era is a sad but inevitable event, just as the beautiful Lockheed Constellation and the high efficient Douglas DC-6 era had to pass, too.

But this is the price of progress, invention and innovation.