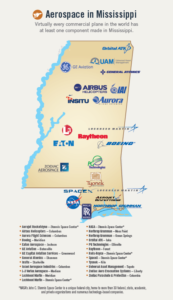 Although Mobile is perhaps best known in aerospace for the Airbus FAL, United Technologies has a major facility here. ST Aerospace, now known as VT MAE, has long had a maintenance, repair and overhaul operation here. Maas, the European-based aircraft painting company, opened a paint shop next to the A320 FAL and already expanded its business model to take in work from non-Airbus customers.

Since Airbus committed to Mobile, the city has commitments from 19 companies to locate here. It wants more.

Boeing has a major defense facility in Huntsville (AL). And, of course, Boeing’s second 787 assembly line is located in Charleston (SC).

As LNC wrote yesterday, NASA’s Stennis Space Center encompasses not only rocket testing for Boeing, SpaceX, Blue Origin and other companies, Lockheed Martin, Rolls-Royce and even NOAA have operations here. The US Navy has a major presences at the Space Center.

The SADC conference will focus on these established and growing sectors, bringing together a cross-section of the aerospace industries stakeholders.

Taking this experience, Leeham joined with Airfinance Journal to create the SADC.

The SADC will be anchored in the US Southeast, with Mobile its launch location.

The SADC is the first event co-produced by AFJ and Leeham. There will be more.