Editor’s note: The Farnborough Air Show begins next week. Mitsubishi is expected to have a flying display of the MRJ90 at an international air show for the first time. This is the last of three stories from Mitsubishi’s MRJ program update in Moses Lake (WA) last month.

July 10, 2018, © Leeham News: An engine flameout in August 2017 that left the Mitsubishi Regional Jet (MRJ) test fleet grounded for several weeks was caused by a manufacturing quality issue on a component in the Pratt & Whitney geared turbofan’s accessory gearbox, according to a Mitsubishi executive. 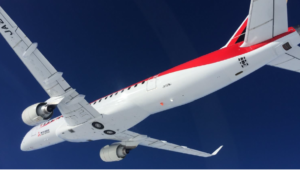 The program’s no. 2 test aircraft was about 105 miles west of Portland (OR) over the Pacific Ocean when the flameout occurred Aug. 21, a Mitsubishi spokesman told Airways magazine at the time.

The MRJ90 landed without incident at Portland International Airport. Its PW1200G engine was taken off and sent to Pratt & Whitney. On Aug. 24, the airplane returned to Moses Lake (WA), home to the MRJ flight test program.

Mitsubishi grounded its test planes for about two weeks before resuming activity. The flight test program is coming along fine, now, and the manufacturing issue has been resolved, Bellamy said. “That is totally addressed at this moment.”

The Pratt & Whitney PW1200G engines are a key selling point for the MRJ series, Mitsubishi’s first foray into the airplane-making business. The GTF engines are meant to be a leap forward in engine technology. 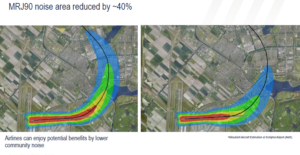 It’s not widely known, but it was Mitsubishi that launched the GTF program with Pratt & Whitney, not Bombardier and the C Series.

However, none of the problems have been fundamental, and Pratt has resolved them or is in the process of doing so.

Bellamy’s not concerned about the GTF’s ability to perform as promised.

“Everybody asks about it,” he said. “It’s like question number two or three.”

Fixes from other versions of Pratt’s GTF have been rolled into the MRJ’s PW1200G, which was certified in 2017.

The MRJ engines have tallied some of the highest service hours in the GTF program, with more than 10,000 hours, said Bryan Rivard, head of Pratt & Whitney’s PW1200G program.

GTF engines are on more 170 aircraft and have nearly 900,000 revenue service hours, he said. Despite the program’s early stumbles, “we’re still above 99.9 percent dispatch reliability and that’s building confidence.”

Pratt & Whitney claims the engines save operators’ $1m/yr per aircraft. That number is an average of savings for all aircraft, Rivard said.

The engine manufacturer and Mitsubishi Heavy Industries set up an engine assembly plant in Nagoya, where the MRJ final assembly plant is located. The first build of a PW1200G has started, Rivard said.

For the moment, the plan is to make only PW1200Gs in Nagoya, he said. “We’re going to support the capacity that’s demanded to support the aircraft sales that come.”

In the meantime, Pratt has also assembled MRJ engines in Mirabel, Canada, and Middletown, CT.

One of the MRJ90 test planes showed off over Moses Lake for US and Japanese news media. As the sleek jet banked away from the reporters, the noise from its engines drastically dropped off.

Noise reduction is a key selling point of the geared turbofan architecture. It gives airlines more flexibility as to when and how they fly into airports with noise restrictions, Rivard said. “That will have market benefits down the road.”