March 11, 2019, © Leeham News: It’s late. There have been creeping delays. There’s been design creep. There were unknown unknowns. It’s way over budget.

No, it’s not a new airplane program, though the parallels are quite apparent.

It’s been a horrible experience I wouldn’t wish on anyone.

This will sound familiar to Airbus, Boeing, Bombardier, Mitsubishi, Rolls-Royce, Pratt & Whitney and, to a lesser extent, GE and CFM. Only Embraer can say it finished on time and on budget.

My wife and I lived in an Eastern Seattle suburb for 16 years. We had a 3,350sf house on 1.12 acres with a large pond and tall cedar trees. It was often called an oasis in the suburbs by our friends. It was.

But along about year 13, we knew the time was coming when we wanted to move. The suburb is in King County, which is dominated by Seattle. The regional system, Sound Transit, included this suburb.

King County taxes had been going up constantly, driven in part by Seattle demands. Sound Transit was adding taxes in its tri-county area to pay for a new network of rail and bus service. Soon, Sound Transit would propose $27bn in new taxes to fund a $54bn orgasm of growth. This tax bill alone would add $1,500 a year to our household. Adding insult to injury, ST would reduce transit to our suburb.

Finally, it was just the two of us. We didn’t need a house or yard this big. It was time to downsize.

My wife had wanted for more than 30 years to move to Bainbridge Island, a 35 minute ferry ride west of Seattle. I’ve been with her 21 years. (She’s very tolerant, by the way. Every other year I spend our anniversary at the Farnborough Air Show.)

My story is, there just comes a time when you say, “yes, dear,” and move on. (She hates this story, but I’m sticking to it.)

She had been checking the Internet for three years and would find nice homes, but didn’t like the kitchen or family room and would want to remodel. Having done this at our house, I didn’t relish living in a remodel for months, so I said (pardon the language, but it’s apt here) the stupidest fucking thing I’ve ever said in my life:

“Let just build and get what we want.”

(By the way, in this context the word above is an adjective, not a verb.)

If we only knew what was ahead.

We spent months looking for a lot on Bainbridge, which didn’t have a lot of good choices. We did our due diligence on cost comparables, location, geology, locating earthquake faults and sensitive soils. We found a beautiful piece of property that was 0.82 acres, only half of which being buildable, that was heavily treed and on three sides had permanent, forested open space. It was the highest point in the neighborhood, 10 minutes from the ferry and 50 yards from a trail head.

It was also 50 yards from the same earthquake fault line we were 10 blocks from in our Seattle suburb.

Avoiding fault lines in Puget Sound is really tough to do. Current building codes have come a long way toward earthquake “protection,” for the lack of a better word. Soon, however, one of those unknown unknowns popped up.

After breaking ground, we struck clay. Unlike striking oil, this isn’t a good thing. We also learned there is “bad” clay and “really bad” clay. We hit really bad clay, called expansive clay. When it’s dry, it’s like cement. When it’s wet, well, the technical term is it’s like snot. (The Geotech we had consulted didn’t warn us about this.)

There were two choices: to pin piles pounded into bed rock or dig all the clay out down to the bed rock 15-20 feet below. We called the latter option the Big Dig, like the infamous Boston tunnel project.

My wife asked the engineers which option was better in an earthquake (see above). The Big Dig would hold up our little mountain. The pin piles meant the house would still be standing if our little mountain fell away. We’d need a 20 ft extension ladder to get to the front door (which we already had).

Ninety six thousand dollars and 46 pin piles later (which was $20k cheaper than the Big Dig), we continued with the foundation.

Designing the home was a process in itself. We chose a mountain lodge style and chose an architect who specialized in this.

Never mind that my wife kept telling him throughout the process don’t give her a design we can’t use. The design include six foot wide hallways and a 25 ft long master closet. These, along with similar design creeps, were nixed.

Our cost target was blown up pretty early, not helped by the snot clay find.

As we went to bid, we were faced with the fact that building in the Puget Sound had taken off like the proverbial rocket. There was a supply-demand imbalance in favor of builders that could and did increase their materials and sub-contractor rates.

Material costs went up along with the labor costs—substantially. Concrete costs more than doubled. Right when we went to bid on wood, Donald Trump was elected president and the first thing he did was slap a 20% tariff on Canadian wood, where—being in the Puget Sound—where home construction wood is sourced. (This is one of many reasons why I dislike Trump.)

All that snot clay from the foundation dig and grading by local ordinance has to be trucked off the island. It’s no good for anything, so it can’t be repurposed on island.

Then there is what we call the “island tax.” Everything is more expensive on Bainbridge Island (except taxes). Access is either by ferry on the south end or by a bridge on the north end. (The Kitsap Peninsula, as it’s called, however, is accessed by ferry from Seattle’s far north suburbs, so in one way or another, many supplies come by ferry.)

Inevitably, there are change orders that add to the cost. In aviation terms, this is design creep.

We ended up with 550 sf feet of basement, enough for a small apartment to rent out, reserve for guests or potentially live-in help as we aged in place. We drew the line at this expense; the estimate just going up and up, with unknowns still to come.

There’s a book by actor Richard Karn, who played Al Borland on the comedy series Home Improvement entitled, House Broken: How I Remodeled My Home for Just Under Three Times the Original Bid.

I thought of this often during this project.

My wife did all she could to keep costs on target, but when tariffs, snot clay, change orders, etc., occur, these are out of control.

She beat up the builder and a couple of vendors for grossly underbidding some things, making it appear some costs would be lower than they were. I liken it to our version of Boeing’s infamous Partnering for Success (aka Preparing for Sacrifice). She spent hours (months, really) Internet shopping to get the best value for lighting and plumbing fixtures that would have easily cost thousands more through the vendor.

When it was all done, we were more than a year behind schedule and double the budget. It’s a result that anyone in the aviation industry can understand.

Was it worth it?

People often said, as we told of our trials, that when we were done, it would be “worth it.” 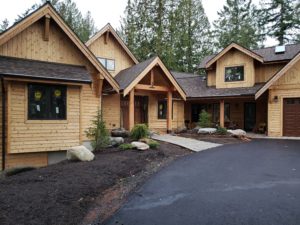 The lodge-style home that, like an airplane program, was delayed, subject to design creep and over budget,. But it’s beautiful. We’re moving in today.

We certainly have a gorgeous house on a beautiful piece of property. We love the home, the forest surroundings and the neighborhood. We love the lodge design with all the wood, exposed beams and big windows that give us an expansive view of the forest.

Would we do it again?

Not on your life. We would have purchased and remodeled (though one of our friends who did so bought a home for less and spent more remodeling and expanding than we did for our new-build; they must have read Richard Karn’s book).

But today is moving day and we couldn’t wait to get in, get settled and finally feel at home.

Now it’s about the unpacking and finishing the landscaping.

But, wait! as they say on those infomercials, there’s more. My wife has to finish getting the window treatments, furnishings and decorating.

The cash outflow isn’t over.