While Airbus and Boeing slug it out in the competition for the duopoly and Bombardier struggles to gain respect as an emerging mainline jetliner producer, Embraer continues and refines its strategy in the smaller-end of the jet market with its E-Jets, E-Jet “Plus” (our term) and the E-Jet E-2. 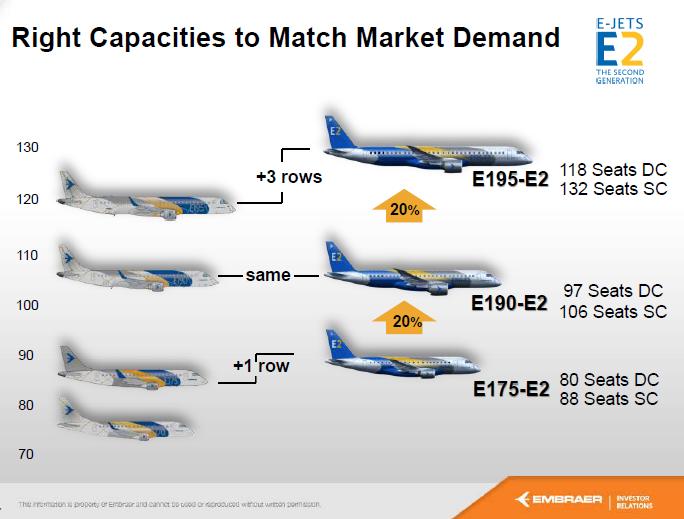 Embraer is broadening its offering from a maximum of 122 seats to a maximum of 132 and dropping its low-end E-170 from future variants. This brings the EMB family to 90-132 seats, following the decision to undertake an extreme makeover of the current E-175/190/195 line by adapting the Pratt & Whitney P1000 Geared Turbo Fan engine to a new wing design and upgrading a variety of systems in the E-Jet E2. 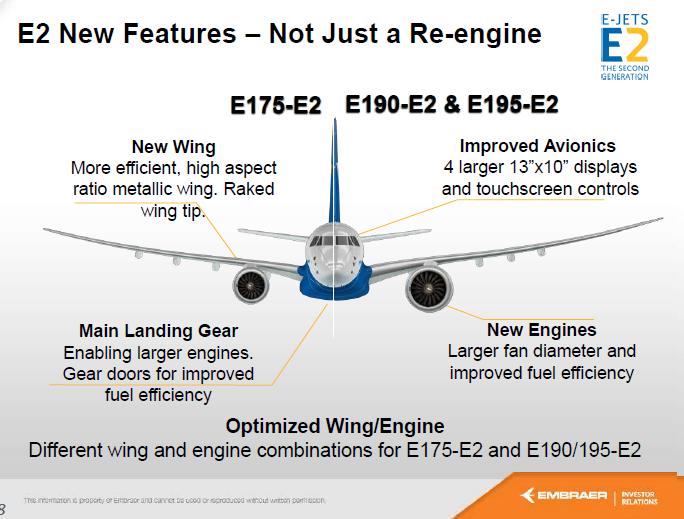 The current jet is now called the E1. With an entry-into-service for the E2 slated for 2018, Embraer is adding some Performance Improvement Packages (PIPs) to the E1 to reduce fuel consumption and to try and match the economics of the lighter weight Bombardier CRJs.

Bombardier invented the regional jet market with the CRJ, an evolution of the Challenger business jet. Embraer followed with its ERJ, a plane based on its successful Brasilia turbo prop. Embraer then revolutionized the regional jet approach when the company designed a clean-sheet airplane, the E-Jet, with 2×2 seating with 18.5 inch seats and larger overhead bins than on the smaller, cramped CRJs and ERJs. The comfort level and passenger space exceeded the ubiquitous Boeing 737s and Airbus A320s and far surpassed the regional jets.

Embraer positioned the E-Jets not as regional jets but as mainline airplanes that could “right size” the airplane for the market, coming in smaller than the Airbus and Boeing products. The E-Jets also had much shorter ranges, 1,800-2,200 miles, capable of one-stop, trans-con US routings but well within the more common ranges of less than 1,000 miles.

The E-Jets entered service in 2004 and have since sold more than 1,000. Embraer discontinued the ERJ and Bombardier soon found its CRJ running a poor second in sales to the more comfortable E-Jets. Those airlines more concerned with the CRJ’s lower economics than the E-Jet’s roomy cabins still bought the CRJ, but Bombardier struggled to keep up.

After Bombardier developed the CSeries, receiving a launch order in 2009 from the Lufthansa Group on behalf of Swiss Airlines, followed by an order from Airbus operator Republic Airways Holdings, Airbus launched the A320neo family. Boeing eventually followed suit.

This left Embraer in the position of having an out-classed E-Jet that entered service only five years previously. Rather than take the risk and the expense of designing an entirely new jet, EMB opted for an extreme makeover in the form of the E2. With an EIS projected for the first half of 2018, EMB will be considerably behind Bombardier’s CSeries, one year ahead of Boeing’s 737-7 MAX and one year behind the rescheduled A319neo.

The E2 is a major improvement over the E1, reducing fuel burn by 16%-23% depending on the sub-type. 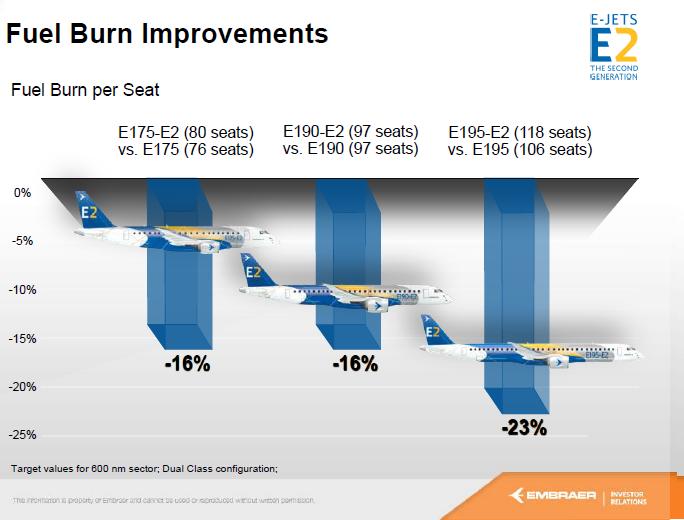 Embraer is enhancing the E1 to improve economies as an interim step. EMB told us:

“On the E175-E1 Embraer is introducing an improvement package that results in a 5% reduction in fuel burn. The package is composed mainly by a new wingtip and several other minor aerodynamic changes such as wheel caps and APU air inlet improvements. On the maintenance side, intervals are being extended to 7,500 flight hours compared to 6,000 flight hours of the competition. The result is a 4% better fuel burn and 2% lower COC per trip or per seat (same seat count) against the CRJ900.” Embraer continues:

“The other members of the E-Jets E1 are also receiving fuel burn improvements but not the wingtip, so the reduction is between 1% and 2% depending on the aircraft model. The longer maintenance intervals are applicable to all E-Jets members equally.”

Embraer and Bombardier are the two principal players in the 100-149 seat sector. Airbus and Boeing are focusing on the larger, more lucrative 150-220 seat sector. Their respective offerings do not compete on economics with either the CSeries or the E-Jet E2, and their sales within the small-end sector are minimal. To be sure, the 100-149 seat sector has become a niche, but it is a niche Embraer and Bombardier can fill much better than the Big Two.

Here are the announced entry-into-service (EIS) dates for the CSeries and E-Jet E2. Based on CSeries customer comments and those by Bombardier’s chief executive officer, we believe there will be an additional 6-9 month delay to EIS. The original EIS was planned for December 2013. Bombardier did not return calls or emails seeking information, so we’re sticking with out estimate. 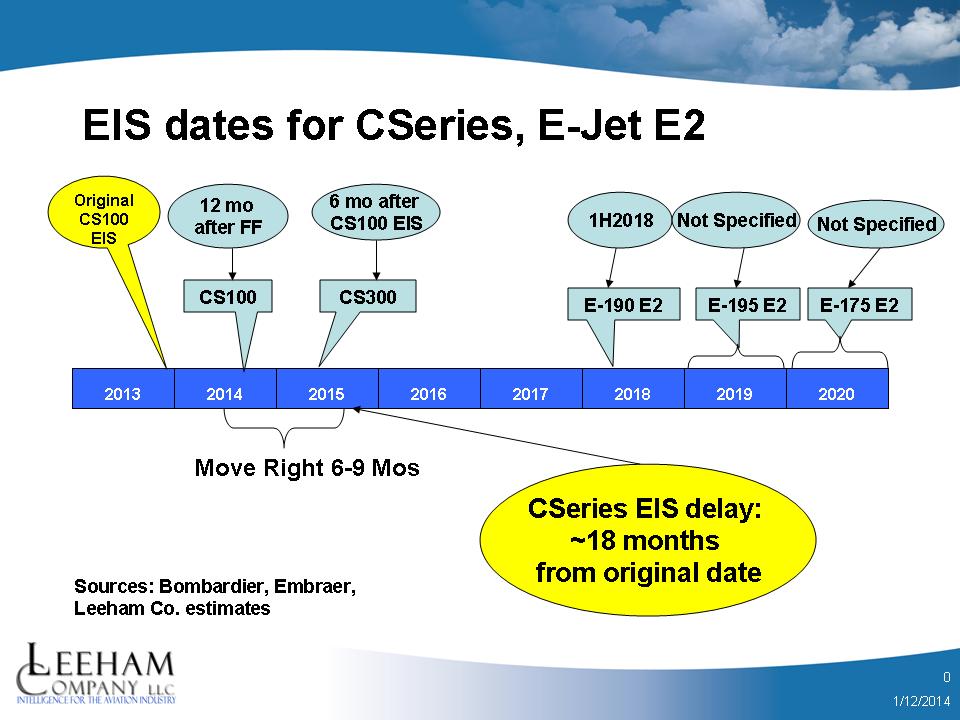 How do the Embraer and Bombardier airplanes compare?

The E-Jet is a four abreast design whereas the CSeries seats people five abreast. This stems from their design centers. The E-Jet has an historical design center of 70-110 seats and the CSeries aiming for 100-150 seats. Dimensionally this means E-Jet E2 is longer than the equivalent seated CSeries since it needs more rows to seat the same number of passengers. This design philosophy difference also carries through to the wing (the E2 being 10% smaller than the CSeries wing) and as we shall see to aircraft performance. 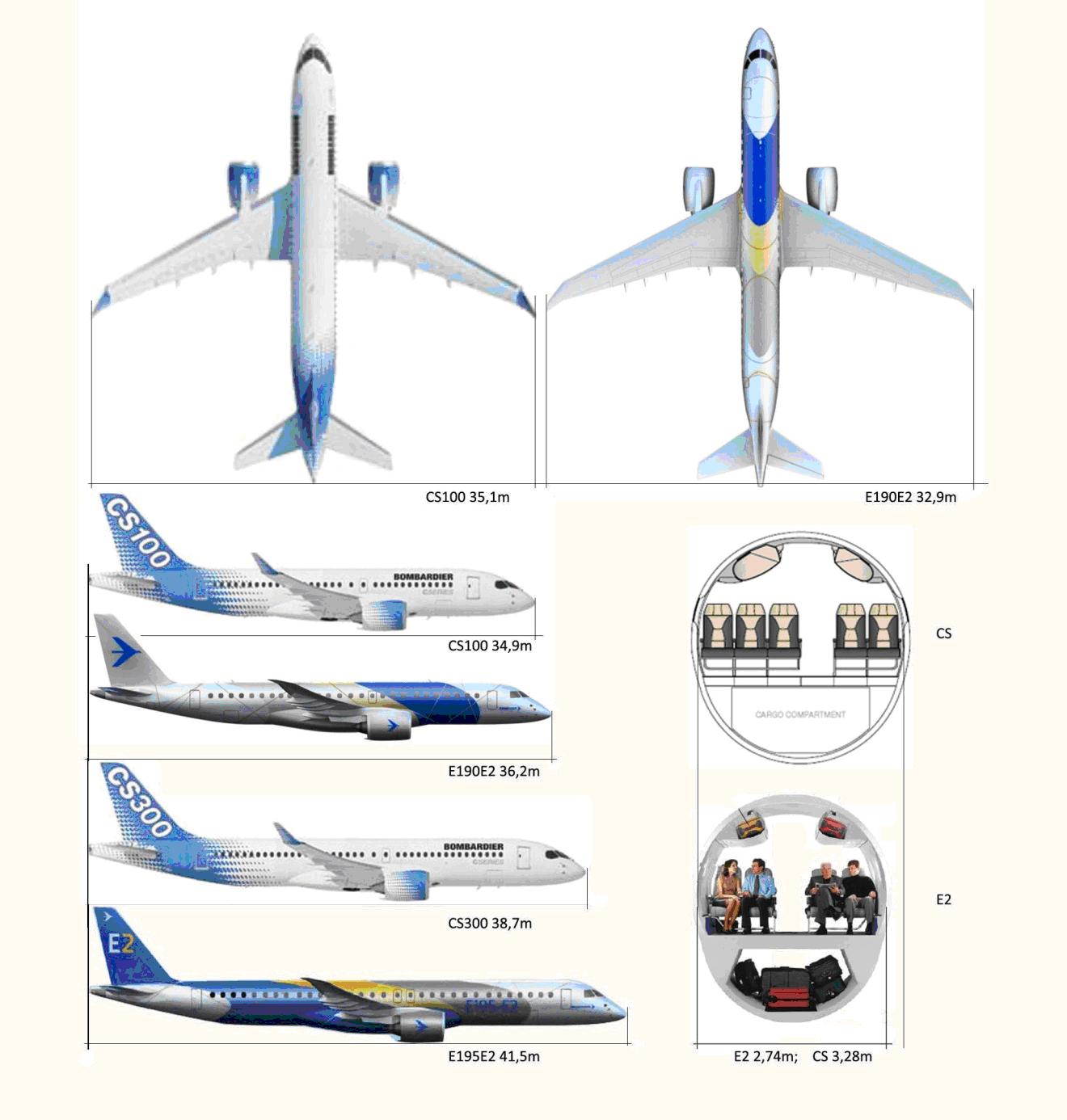 The E2 carries fewer passengers than the CSeries, weighs less and has a smaller payload, based on OEM specifications. This translates to lower landing fees and generally lower operating costs, according to Leeham Co EU’s analysis.

We adjusted the CSeries seating to 31 inch pitch from Bombardier’s public depiction of 32 inches, which adds one row of seating. The industry trend toward 31 inches using slim line seats makes this adjustment logical. It also presents an apples-to-apples comparison with the E-Jet E2; EMB uses 31 inches in its public depictions of the E-Jet E2 capacities. We also configured the A319neo and 737-7MAX with 31inch pitch seating for our fuel burn analysis.  Consequently we also adjusted the CSeries, A319neo and 737-7MAX weights to reflect the slim line seating.

Embraer provided us with its analysis of the E-Jet E2 economics vs the competition, using two-class configuration comparisons. Embraer’s conclusions are: 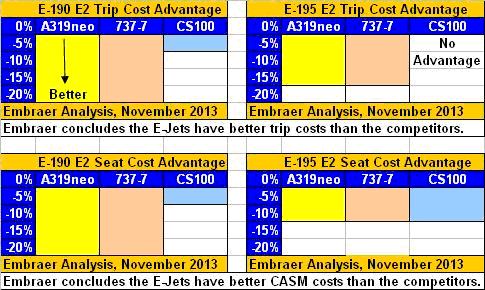 Embraer’s provided this as the basis for its analysis:

“Both airplanes use the same engine but the E190-E2 is being designed with more focus on operating cost than on takeoff performance and range as the CSeries. The result is that E190-E2 wing and empennages are smaller resulting in less drag, less weight and better fuel burn. The E190-E2 also fits doors covering the landing gear in-flight which also contributes to reduce drag and improve fuel burn.

“All in, the E190-E2 has a 8% advantage in fuel burn against CS100. In maintenance, lessons learned from over 1,000 airplanes in-service of the first E-Jets generation provides a unique database for reducing costs and improving reliability for the E2. Also contributing to a better maintenance cost is the fact that the maximum capacity of the E-Jets E2 is around 140 passengers while CS100 systems had to be designed for the CS300 maximum capacity, which is 160 passengers.

In our analysis, undertaken by our European affiliate, we have results which differ more or less from Embraer’s results depending on applied load factor.

For a calculation with all seats filled (ie 100% load factor) the E-190-E2 has 101% of CS100 trip fuel costs and 108% seat costs. Reduce that to a more realistic 70% load factor with both aircraft transporting 80 passengers and the difference narrows to E190-E2 being within 1% for both trip and seat fuel costs. Clearly, when the payload falls into the sub-100 passenger range the E-Jet comes into its design space and matches both trip and seat fuel costs versus the larger CS100. The CSeries is then too lightly loaded and cannot use its advanced composite wing to advantage.

Here is the detailed data; our assumptions are noted in the graphs: 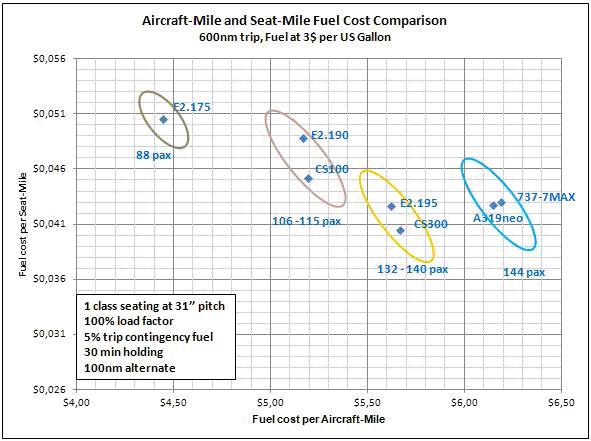 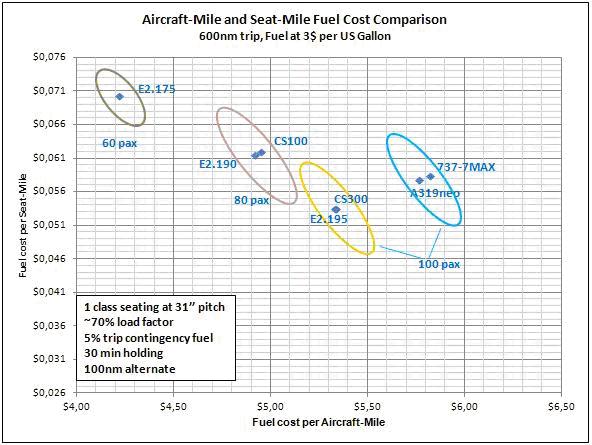 Bombardier and Embraer approached their new airplane projects differently. Bombardier went with a clean-sheet design and Embraer chose the derivative route. Bombardier claims its CSeries is an optimized design for the 100-149 seat sector while the E-190/195 and E-195-E2 are multiple stretches of the basic E-170/175 series, with new wings and ultimately new engines.

Bombardier also added enhanced air field performance into its design, as EMB noted above. The CSeries can operate from shorter runways and more challenging airports, such as London City Airport and potentially from Toronto Billy Bishop Airport, in ways the E-Jets cannot.

Our analysis shows that this works well for the segment that Embraer addresses, when the aircraft meets the real world of fluctuating passenger loads, which often hovers around or dips below 100 passengers. The E-Jet E2s operating economics matches the more advanced CSeries for normal load factors. When more passengers or cargo are transported over longer distances, the CSeries comes into its design window and leaves both the E-Jets behind in efficiency. They both are more economical then the A319neo and 737-7MAX for this segment of the market. CSeries provides more field performance, range and cargo capabilities than the E-Jet E2.