Introduction
Embraer is now the #3 commercial airplane manufacturer, after Airbus and Boeing and supplanting Bombardier, capturing 50% of the orders and 60% of the deliveries in recent years.

We examined the relevancy of the 100-149 seat sector Monday. Embraer is playing an increasingly important role in this sector.

The Brazilian company entered the regional jet field after Bombardier, designing its ERJ (Embraer Regional Jet) to go up against the BBD CRJ (Canadair Regional Jet), at a time when the latter created an entirely new market.

Deciding that the ERJ was no longer competitive, EMB rolled the dice and in the 1990s designed a clean-sheet jet, the E-Jet, that brought mainline cabin standards to the 70-120 seat sector.

More recently, with its CRJs outclassed by the E-Jets, Bombardier took the gamble and designed a clean-sheet CSeries for the 100-149 seat sector, a decision that still draws controversy. With the E-Jet facing economic obsolescence by BBD’s move, this time Embraer decided to bypass a new design and went with an extreme makeover, the re-engined, re-winged E-Jet E2.

Despite offering jets only in seating 70 to 133 seats in standard Y class configuration (not including high-density versions that go up to 144 seats), while Airbus and Boeing go all the way up to the Very Large Aircraft class, EMB has a solid #3 position among the Big Four airframe OEMs. It leads the backlog market share in what has now become a highly fractured market from 70-149 seats. Embraer’s current and future E-Jet models capture 31.64% of the order backlog. Within the more narrow 100-125 seat sector, Bombardier’s CS 100 is the market leader and within the larger 126-149 seat market, a sub-sector in which EMB doesn’t compete, BBD’s CS 300 is the market share leader. 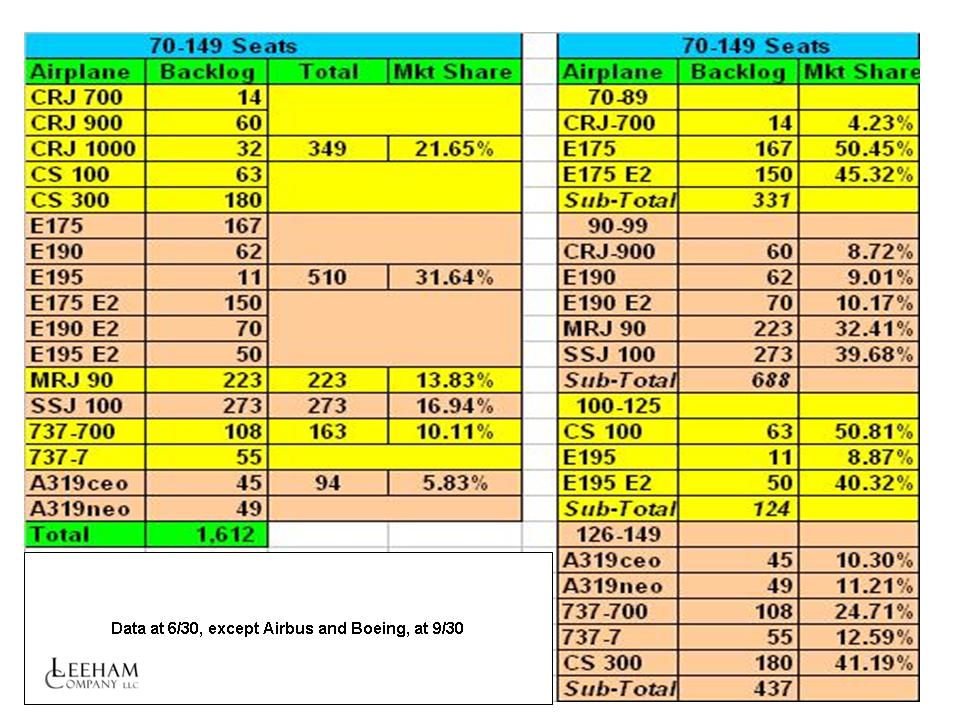 Market share of the 70-149 seat sectors by manufacturer (left) and by sector (right).

The sub-sector results produce interesting results. Mitsubishi and Sukhoi lead the 90-99 seat sector–for now. Embraer anticipates solidify many of the more than 300 commitments for the E2 family before the end of the year, though it’s unclear how many of these will be E-175 E2s, 190 E2s or 195 E2s.

Although the E195 E2 nominally seats 133 in standard coach class, and by some argument should be classed against the BBD CS 300, EMB views the airplane as a 122 seat model in two class, a more common anticipated configuration. Accordingly, we lumped it in with the CS 100 (110 seats in two class). The current E-195 straddles the 100 seat market, but sales campaigns have seen the E190 competing with the CS 100 so we’ve put the legacy E190 in the same category.

Airbus has two identified customers for the A319neo and a group with “Unidentified” customer(s).