Introduction
Oct. 12, 2014, (c) Leeham Co.: The 100-149 seat market sector has long been criticized as irrelevant because of a string of poor-selling aircraft. Boeing officials even labeled this a Bermuda Triangle. The critics fail to recognize, however, that except for the Bombardier CSeries and the Embraer E-195 stretch based on a clean sheet design, there hasn’t been an airplane specifically designed for this sector since 1983. That was the British Aerospace BAe-146, which despite being powered initially by poor engines and having a cramped cabin, sold moderately well.

The early derivatives, the Boeing 737 Classic, and the McDonnell Douglas MD-80, did well. (The MD-80, while capable of seating up to 172 in shoe-horn configuration, was principally operated within the 130-150 seat layout.) But as fuel prices increased, derivatives began to lose their appeal because they weren’t optimized for the market. Engines then in use couldn’t keep up with the rising cost of fuel and airframes designed in the 1960s/70s/80s were no longer aerodynamically efficient as required for the changing fuel environment.

Summary
• Until the Bombardier CSeries and Embraer E-Jet, there hadn’t been an airplane specifically designed for the sector since 1983.
• Engine technology and airframe aerodynamics didn’t keep up with the demands of rising fuel prices for derivative designs.
• Airbus and Boeing are ceding the sector.
• Bombardier and Embraer will “own” the sector.
• There is a valid market for the 100-149 seat sector.

Discussion
Market Demand
The market demand for the 100-149 seat sector is a matter of debate—but only for those who don’t look closely at the numbers.

Airbus dropped segmenting the 100-149 seat sector from the all-encompassing 100-210 sector from its 2014 20 year Global Market Forecast. Airbus did separate the lower end in its 2013 GMF. Boeing doesn’t segment the sector from its Current Market Outlook forecasts, but has said the 100-149 seat sector will likely represent 10%-15% of the total single aisle forecast. Bombardier and Japan Aircraft Development Corp. provide specific forecasts, while Embraer only forecasts the 90-130 seat sector. Thus, the market demand for the next 20 years looks like this:

For comparison, Airbus and Boeing forecast a demand for more than 4,000 small twin-aisle aircraft (787-8, A330)—a figure that draws no skeptics. Accordingly, we don’t understand why the 100-149 seat sector is considered a no man’s land—for the right airplane.

A look back at airplanes
Looking at the string of aircraft for this sector, the original designs and derivatives worked well—until fuel pricing began to increase sharply from 2000. Financially distressed companies didn’t help despite decent designs. 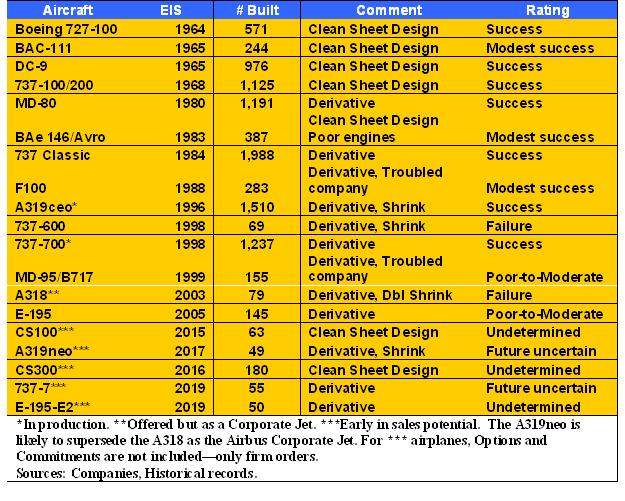 Our Rating is not based on profit or loss for the OEM, but on sales figures. For mature or terminated programs, we have taken into account the era as well as the quantity. What was Modestly Successful in 1965 and 1983 would not be successful today.

The 737-600 and A318 were developed principally to kill the last gasp of McDonnell Douglas Corp., the MD-95, itself a derivative, and never were intended to be particularly competitive. Insofar as MDC merged with Boeing in 1997, which then shut down all commercial MDC programs when orders were filled, it’s not surprising that these three airplanes were Poor or Failures.

We rate the BAC-111 as a Modest Success for its era despite a low number of sales. It was certainly eclipsed by the Douglas DC-9 and Boeing 737 but saw widespread use in Europe. The Fokker 100 was selling reasonably well but Fokker’s financial condition cut short the potential for the airplane. Had it not ceased operations, sales undoubtedly would have been better.

The British Aerospace 146/Avro derivatives sold in greater numbers than the poor reputation of the airplane would suggest. With four engines of an initially troublesome design and a cramped fuselage that made its designed 3×3 seating nearly untenable, the airplane sold much better than most European designs of the era.

The chart clearly indicates that until the advent of the Bombardier CSeries, every airplane was a derivative. The Embraer E-195, itself a multiple stretch, barely falls within the 100-149 seat sector, and hasn’t sold especially well but which is certainly a contributor to the overall program profitability. The new E195-E2, which doesn’t enter service until 2019, has been stretched again to seat 133 passengers. We expect this re-winged, re-engined airplane to be a better seller than the legacy E-195 and to be the principal competitor to the CSeries.

The A319neo, 737-7, CSeries and E195-E2 are too early in their sales programs to definitively rate based only on firm orders. We believe the CSeries program, with 543 orders and commitments, will be a success as commitments are converted to firm orders and new orders obtained. The CS100 will be a niche airplane for difficult airports.

Airbus now has 49 orders for this model. Qatar Airways upgraded its A319neo orders to the A320neo, but Avianca upped its order to 19 and there are 12 from Unidentified(s). Absent delivery schedule for the Unidentifieds, the first delivery is in 2017 to Avianca. Frontier Airlines follows in 2019. We believe Frontier is likely to upgrade to the A320neo now that its business plan evolved to that of an Ultra Low Cost Carrier for which maximum seating is desired. It would not surprise us to see Avianca also upgauge. In any event, we believe the A319neo’s future rests with the Airbus Corporate Jet and not the commercial airline market.

The 737-7 doesn’t enter service until 2019. Only Southwest Airlines and WestJet have ordered the airplane. By the time it comes to cutting metal c.2017-18, we would not be surprised to see these airlines upgauge to the 737-8. We have our doubts whether the 737-7 will ever be built.

Others
Sukhoi and Mitsubishi currently play in the 60-99 seat space. Both indicate they may develop a derivative of their current offerings that would trade in the lower end of the 100-149 seat sector. At this stage, however, they are non-factors.