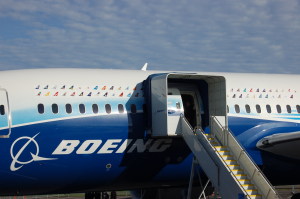 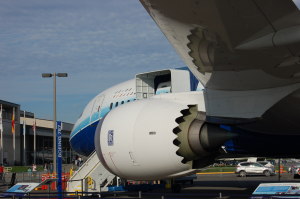 Rolls-Royce developed the Trent 1000 engine for the 787, along with GE Aviation developing the GEnx. Although RR’s engines entered service first, GE has the far greater market share. Photo by Leeham News and Comment. Click to enlarge.

The 787 is the first large airplane, and the first commercial airliner, to be built from composites; 53% of the airplane is the plastic material. New technology engines, a “space age” interior, the “all-electric” systems operations and more are all innovative features of the airplane. Taking all these advances in one go, coupled with the entirely new industrial partnership, design and production system adopted for the 787, caused years of delay and cost over runs in the billions of dollars, but there is no getting around that the airplane is popular with the airlines and has growing popularity with customers. About 1,000 of the airplanes have been ordered. 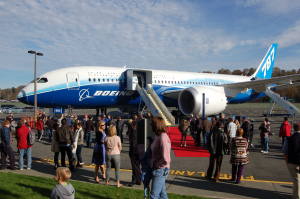 Boeing 787 ZA003 joins an impressive collection of commercial airliners at the Museum of Flight in Seattle at Boeing Field. Photo by Leeham News and Comment. Click to enlarge.

ZA001/002 are stored in Arizona. ZA003 was parked at Moses Lake in Central Washington and flown to Seattle, where a gleaming new paint job was applied. ZA003 will be on permanent display at the Museum of Flight, with part of the cabin in passenger and part in test plane configuration. The 787 join’s the Museum’s collection of commercial airliners that includes the Boeing 40A, Douglas DC-3 (both inside the gallery), a Lockheed Super Constellation, a former Boeing 707 Air Force One, a Boeing 727-200, a Boeing 737-200, the prototype Boeing 747-100 and a Supersonic Concorde.

Alenia sues Bombardier: As if Bombardier didn’t have enough headaches with the CSeries program, one of its major suppliers, Italy’s Alenia, has sued for $121m in lost profits, according to this report in the French language La Presse of Canada. According to the Google translation, which seems unusually coherent for this feature, “Alenia Aermacchi has been sent to the Quebec Superior Court to terminate the contract for the CSeries and claim at least 121 million in damages. The company reserves the right to claim further including investments to cover it might have to do before the termination of the contract, stocks and the claims of its own suppliers.”

Alenia makes the tail section of the airplane. Alenia is also a major contractor on the Boeing 787 program and has been a consistent problem child. Early in the Bombardier program, BBD told us that it had its own personnel on site with Alenia to avoid issues similar to that of the 787 program. But, according to the Google translation of the Le Presse story, it’s Alenia with a beef about Bombardier.

“[Alenia] lost several hundred thousand dollars for each tail – two horizontal stabilizers and vertical stabilizer – it delivers to Bombardier,” Le Presse reports (according to the translation.)

“According to the Italian company, the problem is partly due to a sharp reduction in the rate of production of the CSeries.

“The decrease in demand for the empennage and low production rate lead to a significant drop in productivity and prevent Alenia and production staff to develop and improve the momentum in the manufacturing process, which results in higher costs and loss of earnings,” said the company,” reports Le Presse.

What’s particularly notable to us is the closing BBD statement:

“We want to work with this provider, which has an excellent reputation and with which we started a good relationship, said the spokesman for Bombardier Commercial Aircraft, Isabelle Gauthier, in a telephone interview with La Presse Affaires. Our goal is to continue the conversations to find a solution that does not impact on the CSeries program. “

“She added that if Bombardier could not find common ground with Alenia, it should turn to another solution for making the tail of his new device.” (Emphasis added.)

If this is accurate, it wouldn’t be the first time BBD turned to an alternative solution. Although Shenyang Aircraft Corp. in China is responsible for a section of the CSeries fuselage, BBD’s Northern Ireland plant initially produced the section for the Flight Test Vehicles when Shenyang fell behind.

CSeries was grounded for three months during testing after an engine mishap. The fleet is flying again, but the pace of flight tests remains low. BBD continues to say that entry-into-service will be in the second half of 2015. We believe it will be in the first half of 2016. We have checked with the customer base and we’re told that if nothing else goes wrong with the flight test schedule, meeting a 4Q2015 is possible, but the base remains watchful.

← Del Smith, aviation icon, dies
Boeing 737 MAX 8 as a long and thin aircraft and how it fares in general versus Airbus A320neo. →